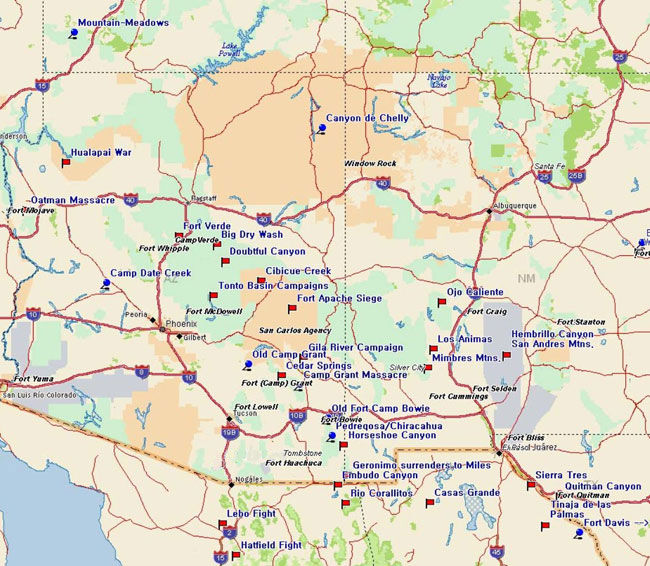 Fort Defiance is located northeast of Holbrook between Chinle and Window Rock along Highway 7 near the New Mexico state line.

Fort Defiance was established as Arizona's first military post for the U.S. Army to patrol the Navajo Country. It was later used to subdue the Navajos on their homeland, and then, be slowly phased into a Navajo Agency to govern the Navajos.

Located at the mouth of Canyon Bonito in Apache County, about 7 miles north of Window Rock, Arizona, or 25 miles northwest of Gallup, New Mexico. It is at an elevation of 6836 feet above sea level. Fort Defiance was originally the location of the first Navajo Medical Center on the entire Navajo Reservation. 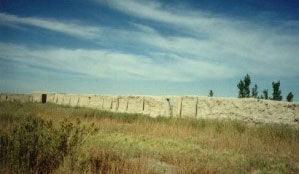 Near Mile Post 65 south of Deseret on Utah Highway 257

In the spring of 1865, the inhabitants of the fledgling community of Deseret became concerned that they might experience trouble during an Indian uprising known as the Black Hawk War, so they set about constructing a fort for their own protection. While Black Hawk came upon the area during this time, the settlers successfully negotiated with this man and no fighting ensued. An interesting note is that the fort was never used for its initial purpose, instead cattle were housed in this fortified structure.

Fort Duncan, located on the east side of the Rio Grande, just above Eagle Pass, was established on March 27, 1849, by Captain Sidney Burank, and occupied by three companies of the First U.S. Infantry Regiment. During the Civil War the post was occupied by Confederate troops of the Frontier Regiment. Federal troops reoccupied the post in 1868. It remained under military authority until 1916. Its primary purpose was to protect the trade crossing into Mexico and travelers along the road to El Paso. It was taken over by the city in 1935, and today many restored stone buildings form the center of a municipal park and country club. The old headquarters serves as a museum.

Established as Camp Halleck by Captain S.P. Smith July 26, 1867, to protect the California Emigrant Trail and construction work on the Central Pacific Railroad. The Camp was named for Major General Henry Wager Halleck, at that time Commander, Military Division of the Pacific. In May, 1968, it became headquarters for the Nevada Military District when Fort Churchill was abandoned. 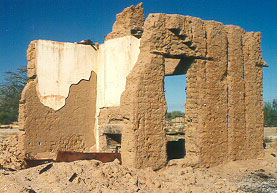 Adobe ruins of the old fort about 2 miles off the Beeline Highway on the Fort McDowell Indian Reservation. 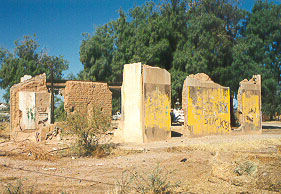 Camp McGarry here on the old Applegate Trail was an Army fort manned from 1865 to 1868.

If you come up from Lake Pleasant make sure you are one of Arizona's better 4WDers! The easier way is to come down from Crown King.

One building remains and much evidence of inhabitants. 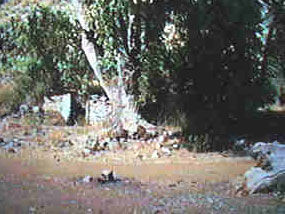 Al Francis built Fort Misery as his home while he lived in the Bradshaw Mountains. Al was in charge of hauling ore from Oro Belle to Crown King. He jokingly called his home "Fort Misery" and the name stuck. Francis was responsible, along with Burro John, for putting up William Bell "Kentuck"'s grave headstone. Fort Misery was inhabited through the 1920's.

For 220 miles from the ruins of Fort Mojave on the banks of the Colorado River to Camp Cady (now detours through Afton Canyon) runs the Mojave Road.

First called Camp Schell. Troops were sent here to protect the mining town, the Overland Stage, and Pony Express Routes. The Schell Creek Stage Station was established here in 1859. The post was abandoned after the Union Pacific Railroad was completed. Remains of some structures still exist on a private ranch at Schell Creek, about 20 miles south of Lages.

Store and post office. Few residences. Nothing of the old fort remains.

Originally the name of an ancient Spanish province. The town's name comes from a family which arrived in NM in 1693. Aragon is old Fort Tularosa, which served as an Apache Indian agency from 1872 to 1874. The Indians were moved here from the Ojo Caliente reservation, then moved back and the fort was abandoned in 1874.

The following story is from the book, Encyclopedia of Indian Wars, by Gregory F. Michno.

Lt. Henry H. Stevens, 5th California Infantry, and 54 men of Company I were on a march from Fort Cummings to Fort Bowie. As they passed through Doubtful Canyon near Stein's Peak, about 100 Apaches attacked them. The fight lasted for nearly two hours and resulted in 10 Apaches dead and about 20 wounded, and 1 soldier missing, presumed killed, and 6 wounded, 1 mortally.