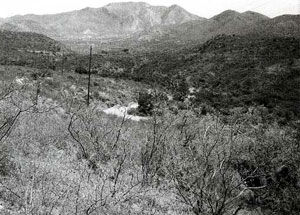 27 August 1872, Sonoita, Arizona: Despite warnings about daytime ambushes in Davidson Canyon, Lt. Reid T. Stewart, new to Camp Crittenden, left the post to travel to Tucson via the canyon. With him were four enlisted men of Company F, 5th Cavalry, under Cpl. James Brown, two invalid soldiers, and a civilian named Albert Banta. Soon Stewart and Cpl. Joseph P.G. Black, riding together in a buckboard, were an hour ahead of their escort.

When the buckboard entered Davidson Canyon, between the Empire and the Santa Rita Mountains, Chiricahua Apaches did indeed jump the two soldiers, killing Stewart and wounding Black, who ran but was captured. When Brown and the escort arrived, they saw Black tied to a burning dead tree and being tortured. Brown ran to him, but 15 Apaches bore in on one side and 3 on the other, forcing the soldiers to abandon the attempt. Later, Banta commented that they could have beaten the Indians easily "if those dough boys had been any good."

Brown received the Medal of Honor for attempting to rescue Black, securing Stewart's body, and driving the mail through to Tucson.