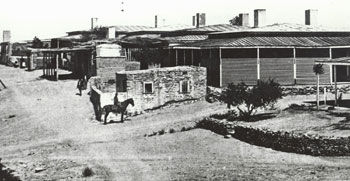 First established on November 27, 1850, it was originally located in the bottoms near the Colorado River, less than a mile below the mouth of the Gila. In March 1851 the post was moved to a small elevation on the Colorado's west bank, opposite the present city of Yuma, Arizona, on the site of the former Mission Puerto de la Purisima Concepcion. This site had been occupied by Camp Calhoun, named for John C. Calhoun, established on October 2, 1849, by 1st lieutenant Cave J. Couts, 1st Dragoons, for the boundary survey party led by 2nd Lieutenant Amiel W. Whipple, Corps of Topographical Engineers. A ferry service, maintained by the soldiers for the survey party's convenience, also accommodated emigrants. Fort Yuma was established to protect the southern emigrant travel route to California and to attempt control of the warlike Yuma Indians in the surrounding 100 mile area.

Established by Captain Samuel P. Heintzelman, 2nd Infantry, it was originally named Camp Independence. In March 1851, when the post was moved to its permanent site, its name was changed to Camp Yuma. A year later the post was designated Fort Yuma. In June 1851 the Army virtually abandoned the post because of the high costs incurred in maintaining it, and it was completely abandoned on December 6, 1851, when its commissary was practically empty of provisions.

The post, however, was reoccupied by Captain Heintzelman on February 29, 1852. In 1864 the Quartermaster Corps erected a depot on the left bank of the Colorado, below the mouth of the Gila River. When the extension of the railroad system obviated the need of a supply depot, Fort Yuma was abandoned on May 16, 1883. The reservation was transferred to the Interior Department on July 22, 1884. Today, the site of the military reservation is occupied by the Fort Yuma Indian School and a mission.