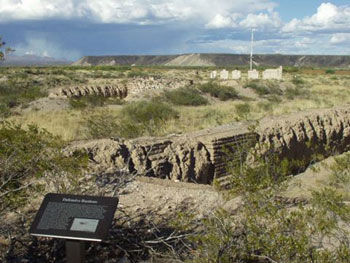 The heavily erroded ruins of Fort Craig are located about 5 miles north and 5 miles east of exit 115 on I-25 in New Mexico, about 125 miles north of Las Cruces or 35 miles south of Socorro. The earthen fortifications built to repulse Sibley's army are still visible. Travel to the site is on about 5 miles of gravel road.

Fort Craig, New Mexico, one of the largest forts in the West, played a crucial role in both Indian campaigns and the Civil War. Its primary function was to control Indian raiding and to protect the central portion of the Camino Real, a trail which stretched from northern Mexico to Taos, New Mexico.

Established in 1854, it was constructed on 40 acres leased from the Armendariz land grant. Named for Captain Louis T. Craig, who had served in New Mexico and was later killed by deserters in California, the new post was spacious by frontier standards. Extending 1,050 feet east to west, and 600 feet north to south, Fort Craig consisted of 22 buildings of adobe and rock construction around four sides of a large parade ground. Major structures included the commanding officer's quarters, enlisted barracks, officer's quarters, warehouses, commissary, ordnance sheds, stables, hospital and sutler's store. An adobe wall enclosed the post, and a sally port, or gate, in the west wall provided the only entrance. Surrounding the fort outside the wall was a defensive ditch, a feature unique in Southwestern frontier military posts. Fort Craig was designed for two companies, about 120 men, but it often was garrisoned by four. 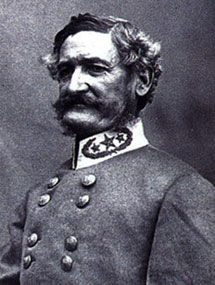 General Henry H. Sibley
Picture from the Library of Congress

At the outbreak of the Civil War, Fort Craig remained a Union Army Post manned by regular army troops. In 1862, troops under the command of Confederate General Henry Hopkins Sibley continued up the Rio Grande after capturing military installations to the south. Sibley, previously stationed at Fort Union, near Las Vegas, New Mexico, resigned his federal commission to follow his native state of Louisiana into the Confederate ranks. 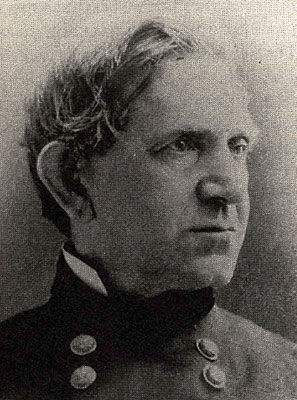 Twelve hundred federal troops under Col. Edward R.S. Canby had been concentrated at Fort Craig to await the Confederates behind new earthern fortifications bolstered by cannons. When the militia forces, which included Col. Christopher "Kit" Carson's 1st New Mexico Cavalry, arrived, Canby had nearly 4,000 men. In fact, the fort was so crowded that many of the soldiers were forced to pitch tents outside the walls.

Marching north from El Paso, where he had temporarily headquartered, Sibley led his troops up the Rio Grande Valley in a punishing winter storm. On the morning of February 21, 1862, Colonel Canby watched as Sibley's troops marched north on the opposite banks of the river. He ordered the bulk of his forces out of the post to intercept the Rebels. Fording the river they attacked and the Battle of Val Verde took place in the shadow of a long volcanic escarpment of Mesa de la Contadera, also known as Black Mesa.

Many considered the battle to have been a Confederate victory, but Union forces succeeded in holding the fort and half of the Confederate's supply wagons were destroyed. The loss of the remaining supplies at the Battle of Glorieta, east of Santa Fe, on March 28, 1862 forced the Confederates on a long and dreary retreat down the Rio Grande Valley back to Texas and ended southern aspirations for military conquest of the West. Sibley, who is best known for the invention of the Sibley tent, later traveled to Egypt where he was made inspector general of artillery, and devised the plans for the coastal defenses of Egypt and Alexandria. More 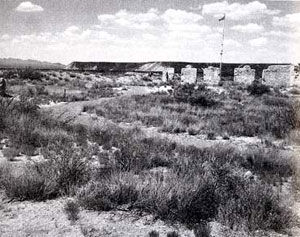 After the Civil War, troops stationed at the fort were able to control Indian raiding. The surrounding valley prospered under military protection. The fort was permanently abandoned in 1885. After being under private ownership, it was eventually donated to the Bureau of Land Management and is listed on the National Register of Historic Places.