Captain Valentine Dresher halted his Company B, 1st Infantry, California Volunteers, at Cooke's Spring, New Mexico, on October 2, 1863. Their march had been easterly from Fort West. The Captain chose this location for a new Fort. The location was about 20 miles northeast of present-day Deming, New Mexico. The site of Fort Cummings is located on BLM (west of the barbed wire fence) and private ranch lands (east of the fence) approximately 30 miles southwest of Hatch off of Highway 26. 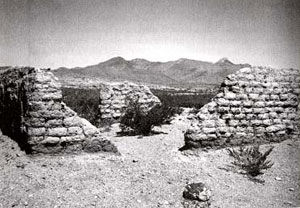 Cooke's Peak rises about 8 miles north of the fort's ruins. The Peak, the Spring, and a Canyon were all named for Colonel Philip St. George Cooke who led the Mormon Battalion from Santa Fe, New Mexico, to California in 1846. From 1863 over the next 10 years, soldiers built barracks, a hospital, several other buildings and a high adobe wall around the Fort.