Beneath the sands of the once-beautiful land lie the bones of more than 120 men, women and children slain at Mountain Meadows in 1857, their mortal remains left to the caprices of nature and their killers protected by Utah's peculiar theocracy. Only one participant was ever punished for the butchery, although more than 50 men took part.

The entire truth will probably never be known because most of the documents and diaries of the participants were destroyed. The surviving children were able to supply details on the massacre itself, however.

Bishop John D. Lee approached the train under a flag of truce and convinced the pioneers that he had persuaded the Indians to let them go if they would leave their wagons and possessions to the Indians. After deliberating, the suffering group could find no other way out and they agreed. The pioneers were told that it should appear to the Indians that they were the Mormon's prisoners. Lee sent in a wagon and the emigrants' weapons were loaded in to it. The wounded were then loaded into two wagons and two other wagons were loaded with the youngest of the children. These wagons left first followed by the women and older children on foot. The men were lined up single file, and parallel to a single file of Mormon Militiamen and this group followed about a quarter of a mile behind. As the group moved out, the waiting Indians moved in and began to loot the goods the pioneers had left behind. A short distance later, Lee rose up in his stirrups and shouted "Do your duty!" and each Mormon shot the member of the train standing next to him. At about the same time up ahead, Mormon Militia disguised as Indians, and the real Indians, moved in on the women and older children, shooting, clubbing and axing them to death.

No effort was made to give the bodies a decent burial. Foraging animals scattered the bones over a great distance. In 1859, a passing detachment of U.S. Cavalry stopped and gathered what bones they could find into one grave. A rock cairn was erected with a carved stone and the words "Here lie the bones of one hundred and twenty men, women and children from Arkansas, murdered on the 10th day of September, 1857." An officer painted a cross-line beam above the cairn with the words "Vengeance is mine, saith the Lord. I will repay."

The two wagonloads of children who had not been killed were adopted into Mormon homes. It is believed that 18 of the children survived. In 1859, Captain James Lynch of the U.S. Army took possession of these young survivors and returned them to relatives in Arkansas. Although there were many investigations, no punishment was handed out for the crime until 20 years later. Lee wrote out a full confession and was found guilty and sentenced to death by firing squad. 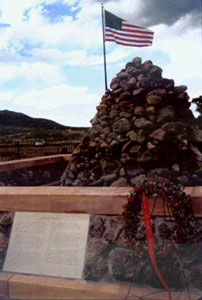