Located off Hwy. 80 outside of Douglas. There is a monument along Hwy.80 commemorating the surrender of Geronimo, however, the real surrender site is in Skeleton Canyon, also known as Guadalupe Canyon or Cañon de los Embudos. It is a good 11 miles over dusty roads, and through dry washes. 4WD or by horseback is recommended. There are some signs pointing in the direction of Skeleton Canyon. -- To reach Skeleton Canyon, AZ, take Geronimo Trail, from 15th Avenue in Douglas (right on US 80), and drive on the dirt road until you pass mile marker 20. Road on the right side after mile 20 is Skeleton Canyon Rd. 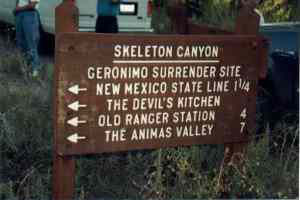 ...On the appointed day, January 11, as Crawford waited to parley, an unexpected third party intervened. The Mexicans had triumphed over Victorio, and they intended to have the elusive Geronimo as well. As Crawford watched from the sidelines, a band of Mexican irregulars, consisting mainly of Tarahumara Indians, attacked. As the captain tried to intervene to arrange a cease-fire, he took a bullet in the head, reportedly fired by mauricio Corredor, thought to have been the same Tarahumara who killed Victorio. As the gun battle evolved, it seemed that the Mexican irregulars were just as willing to trade shots with the U.S. Army's Apache as with Geronimo's Apache. One of Crawford's scouts shot and killed Corredor.

After the battle, Geronimo and the Mexicans scattered in separate directions, and the U.S. Army contingent, now led by Lieutenant Marion Maus, headed north thinking that the expedition had been a failure.

Two days later, as the column was nearing the border, some Apache women approached Maus to explain the Geronimo was still ready to talk, but he would deal only with Crook. Maus suddenly had some good news to report when he reached Fort Bowie. 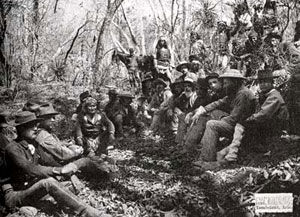 Picture of Geronimo and Gen. Crook at Time of Surrender.
From the book, Encyclopedia of Indian Wars, by Gregory F. Michno.

Arrangements were made, and on March 25, 1886, Crook and Geronimo met once again, this time at Embudo Canyon, a dozen miles inside Mexico. Crook accepted Geronimo's surrender, as well as those of Nana, Naiche, and others. As in 1883, Crook went north without Geronimo, who promised that he would be along soon. Lieutenant Maus would escort the Chiricahua back to the United States. Once again, it seemed to be over, but once again it was not.

Two days after the conference and the surrender, the Chiricahua got hold of some mescal, had a few drinks, and had a few second thoughts. Lieutenant Maus returned to Fort Bowie with old Nana and about sixty other people, mainly women and children. Geronimo, Naiche, twenty warriors, and thirteen women were once again in the wind. Unfortunately, Crook had already wired Sheridan to report Geronimo's capture.

On April 1, 1886, Crook wired Sheridan again, asking to be relieved of his command.

As George Crook headed north, returning to his former post in the Department of the Platte, Geronimo was on his way back to the Sierra Madre.