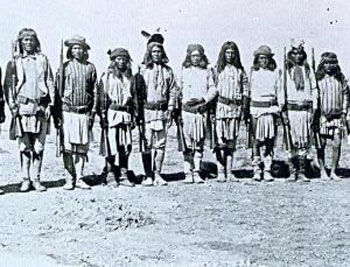 Located on the White Mountain Apache Reservation, the Battle of Cibecue, August 30, 1881, was brought on by the influence of a shaman, Nockadelklinne, who preached a doctrine of raising the dead and removing the white interlopers from Arizona. Alarmed civilians and military personnel wanted the shaman arrested. Fighting erupted shortly after Nockadelklinne’s arrest along Cibecue Creek. The Prophet, as he was called, died in the aftermath, as did several soldiers under Col. Eugene Asa Carr. Most of Carr’s casualties resulted from the mutiny of the White Mountain.

Apache scouts. The Cibecue affair touched off a general outbreak that saw Chiricahua and Warm Springs Apaches such as Naiche, Juh, and Geronimo bolt the reservation and plunge Arizona, New Mexico, and northern Mexico into two years of turmoil. Cibecue battlefield is located in the village of Cibecue. No marker denotes the site.

Carr reached Nakaidoklini's camp on Cibicue Creek on August 30, with elements of two companies of cavalry and a two-dozen-man detachment of White Mountain Apache scouts under Lieutenant Thomas Cruse. The scouts spoke with Nakaidoklini, explaining that he had to come with the soldiers. If he did not, they told him, he would be killed. Nakaidoklini predicted that he would never be killed and went with the soldiers.

As the troops made camp, Nakaidoklini's disciples attacked in force. The Apache scouts promptly revolted and joined in, shooting wildly at the soldiers. Having been ordered to shoot Nakaidoklini if anything happened, Sergeant John MacDonald did so, although it took several shots to bring him down. Various accounts of the incident have Nakaidoklni's wife and members of his family also being killed.

The soldiers took cover and the two sides traded shots until dusk, at which time, Carr organized a withdrawal under cover of darkness. He had lost four men killed in action, and another man would later die of his wounds.