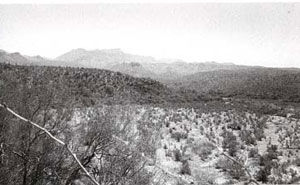 In the pre-dawn hours of April 30, 1871, eight men and 110 women and children were brutally murdered in the brief span of 30 minutes. In addition, 28 Aravaipa Apache children were kidnapped and sold in the child slave trade.

From the book, Oh What a Slaughter, Larry McMurtry gives his description of the Camp Grant Massacre.

In recent months there had been a number of small-scale attacks well south of Tucson, a good distance from the Aravaipa but close enough to alarm the citizenry of Tucson-white, Mexican, and Papago-to take up arms. The Apache and the Papago were bitter enemies; likewise the Apache and the Mexican.

On the 28th of April Captain Penn at Fort Lowell sent Lieutenant Whitman a message saying that a large and mixed group of men were said to be heading north out of Tucson, in the direction of Camp Grant. The messenger bringing this news arrived at the camp in the early morning of April 30.

Lieutenant Whitman immediately sent some men to the Apache camp to urge the Apaches to come closer to the fort, but when the men reached the encampment they discovered that they were too late. The men from Tucson-six whites, forty-eight Mexicans, and ninety-four Papago-had already done the work they came to do. More than one hundred Apaches were dead-all had been killed with knives, hatchets, or clubs. The Papago, particularly, favored clubs.

Twenty-nine Apache children were taken in this raid; most were sold into slavery in Mexico, a source of great bitterness to the survivors.