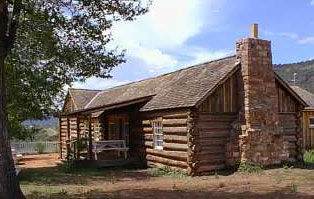 In late August 1881, even as Nana was disappearing across the horizon, The Indian Bureau agent at San Carlos, J.C. Tiffany, convinced departmental commander Colonel Orlando Willcox that Nakaidoklini was a clear and present danger. Willcox, in turn, issued orders to veteran Indian fighter Colonel Eugene Carr, now the commander of the 6th Cavalry, to arrest Nakaidoklini. Although he rode out from Fort Apache to do as instructed, Carr questioned the orders. Doing a bit of soothsaying himself, he predicted that interfering with a medicine man could invite more trouble among his followers than it prevented.

Carr reached Nakaidoklini's camp on Cibicue Creek on August 30, with elements of two companies of cavalry and a two-dozen-man detachment of White Mountain Apache scouts under Lieutenant Thomas Cruse. The scouts spoke with Nakaidoklini, explaining that he had to come with the soldiers. If he did not, they told him, he would be killed. Nakaidoklini predicted that he would never be killed and went with the soldiers.

As the troops made camp, Nakaidoklini's disciples attacked in force. The Apache scouts promptly revolted and joined in, shooting wildly at the soldiers. Having been ordered to shoot Nakaidoklini if anything happened, Sergeant John MacDonald did so, although it took several shots to bring him down. Various accounts of the incident have Nakaidoklini's wife and members of his family also being killed.

The soldiers took cover and the two sides traded shots until dusk, at which time, Carr organized a withdrawal under cover of darkness. He had lost four men killed in action, and another man would later die of his wounds.

News of the death of Nakaidoklini spread quickly, liberally enhanced by exaggeration. This was the catalyst that led to a general uprising. It probably would have happened soon anyway, but the assassination of the shaman was the direct cause. Over the next three days, five civilians and three soldiers were killed by the Apache in remote locations in east-central Arizona near Fort Apache. They even laid siege to Fort Apache itself, during which Private First Class Will Barnes of the Army Signal Corps earned the Medal of Honor for bravery in the defense of the post.