Fort Bayard is truly a gem. It was started to protect the inhabitants in the area from the Apaches. Fort Bayard was home to Native American Indian Scouts, two companies of Buffalo Soldiers including Medal of Honor recipients and William Cathay (A.K.A. Cathy Williams) who was the only known female Buffalo Soldier. Military leaders such as Generals George Crook and "Black Jack" Pershing served at the military post.

In 1899 the military post was abandoned. Later that year it became a sanatorium for treating TB. On May 1, 1922, Fort Bayard came under the jurisdiction of the Veterans Administration. During World War II, Fort Bayard housed German Prisoners of War who helped to maintain the post. In 1965, the State of New Mexico assumed control of the post as a long-term health care facility. The post's adjoining military cemetery, dating back to 1866, became a National Cemetery on July 5, 1976. Fort Bayard became a New Mexico Historic District back in 2001 and was named a National Historic Landmark on March 19, 2004.

Many buildings are still standing. 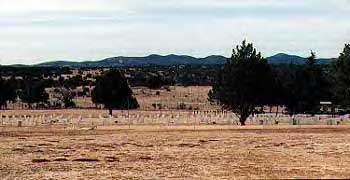 Fort Bayard began in 1866 when Company B of the 125th U.S. Colored Infantry under the command of Lieutenant James Kerr established an encampment near the gold and silver mining communities of Pinos Altos and Silver City, New Mexico. This location commanded Apache war trails from their lands near the present Faywood Hot Springs to numerous mining areas. According to Lieutenant Kerr, it was ". . . a beautiful situation on the eastern slope of the Pinos Altos Mountains," with abundant wood, water, and forage.

General John Pope recorded, "I have established only one new post on the Apache Frontier, and that is located near the head of the Mimbres River, about one hundred and fifty miles west of the Rio Grande. This post, with Fort Cummings at Cook Spring, Fort Selden on the Rio Grande, Fort Stanton on the Bonito River between the Rio Grande and the Pecos, form a line of posts covering the southern frontier of New Mexico from the Apache Indians."

At this time, roving Apache bands headed by Mangas Coloradas, Victorio, and later on, Geronimo, were desperately resisting settlers and miners who were encroaching on their hunting grounds. The army answered this threat with the men of the 125th who were first organized at Louisville, Kentucky between February and June of 1865. Individual companies were stationed at Forts Cummings, Bayard, and Pinos Altos. By the end of August, there were approximately fifty enlisted men at Fort Bayard, but by October of the same year, the number had increased to over two hundred men.

The post was named in honor of General George D. Bayard, who died from wounds received in the Battle of Fredericksberg, Virginia in 1862. He had previously served as a lieutenant in the New Mexico and Arizona territories where he had sustained arrow wounds in Indian confrontations.

During the 1870s and 1880s, the troops launched campaign after campaign against the Apaches. It was no easy task to combat these tough, dedicated fighters who were so well adapted to their native land. The usual story prevailed time and time again in the reports of young lieutenants: They found only traces of the hostiles, the rain and snow were extreme, the soldiers ran out of supplies, or their horses gave out during the chase. Often reports of these sorties concluded with the number of deer or turkeys killed. 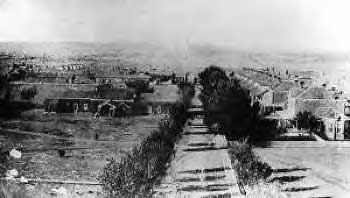 In January of 1877, Corporal Clinton Greaves of the 9th was stationed at Fort Bayard when word reached the post that a band of forty to fifty Chiricahua, Warm Springs, and Mescalero Apache had left the reservation and were heading into New Mexico. A party consisting of one officer, six men of the 9th Cavalry including Greaves, and three Navajo scouts left the post in search of the renegades. The soldiers followed the trail into the Florida Mountains, where they met the Apache and tried to persuade them to surrender. Instead, they were surrounded and attacked from all sides. Corporal Greaves " . . . fought like a cornered lion and managed to shoot and bash a gap through the swarming Apaches, permitting his companions to break free." The soldiers escaped, leaving five Apache dead and more wounded. Greaves was awarded the Congressional Medal of Honor for his deed, and others of his party were commended for their bravery. Clinton Greaves and other Black cavalry troopers were recently honored at the dedication of the "Buffalo Soldier" Memorial, installed at Fort Bayard on July 26, 1992.

In the late 1870s all five of the cavalry units stationed at Fort Bayard fought Victorio and his followers. The troops used both Apache and Navajo scouts in their efforts. After the death of Victorio in October of 1880, his successor, Nana, took up the fight and led an especially devastating raid in July and August of 1881. Nana's band fought troops of the 9th Cavalry eight times. In one of these encounters, in Gavalan Canyon which joins the Mimbres River, Lieutenant George W. Smith and four enlisted men from Fort Bayard were killed.

The McComas Incident occurred on March 27, 1883. This event made national news for weeks and had a lasting impact on the lives of the Apaches. The press all over the country demanded immediate and decisive action be used to stop these atrocities. Judge McComas, a prominent citizen in Silver City, along with his wife, and son, Charlie, were traveling by buckboard from Silver City to Lordsburg. A band of Apache attacked them at the mouth of Thompson Canyon in the Burro Mountains. They killed the Judge and his wife and carried Charlie off. Soldiers and local citizens failed to find any trace of Charlie. To this day, stories abound about what happened to this blond-haired little boy.

Finally, with the surrender of Geronimo on September 1886, the conflict came to an end. The Indians no longer presented a threat to the area. Fort Bayard continued as an active Army post until 1899. About this time it was proposed that the Fort be abandoned. However, Surgeon General Sternberg of the U.S. Army had noted the general well-being of the line troops on duty at the fort. He suspected the area's mild climate and gentle seasons were making a difference in maintaining healthy troops. He began posting troops sick with tuberculosis who were returning from the tropics.
He conceived the idea of transferring the post to the Medical Department as an Army General Hospital for the treatment and research of tuberculosis. Army doctors began producing excellent results with their patients. During World War One there were as many as 1,700 patients at the hospital. From 1899 to 1920, some of the foremost medical army officers in the country carried out important work here.

On May 1, 1922, Fort Bayard came under the jurisdiction of the Veterans Administration and then in 1966, it was turned over to the State of New Mexico as a public nursing home.

Today the post cemetery, which began in 1866, is all that remains as a reminder of past glories. It was designated on July 5, 1976, as a National Cemetery. It continues to be used, and holds the remains of hundreds of armed forces personnel and their dependents, destitute civilians of the frontier days, and a few unknowns.

Because of its continuous use, Fort Bayard did not suffer the fate of its surrounding sister forts. Visitors can still visit the area and see the silent parade ground with its surrounding officers quarters proudly facing Clinton Greaves' statue armed and ready to go. Close by is the still-flourishing hospital which continues to serve the needs of people living in the area.

All tours will begin at the Fort Bayard Theatre located near the northeast corner of the hospital.

Guided tours of Fort Bayard will be held on the following days of 2010 (or by appointment). All tours will begin at the Fort Bayard Theater located near the northeast corner of the hospital.

May - September: every saturday