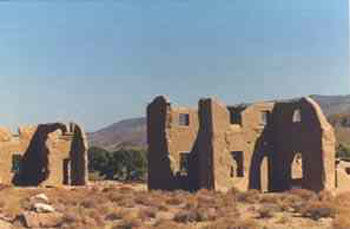 Fort Churchill was once a U.S. Army fort built in 1861 to provide protection for early settlers. It was abandoned nine years later, and today the ruins are preserved in a state of arrested decay. Twice a year the Nevada Civil War Volunteers puts on a civil war encampment at Fort Churchill.

A visitor center displays information and artifacts of the fort's history. The Pony Express and the Overland Telegraph once passed through this area. Nearby is Buckland Station, a Pony Express stop, supply center, and former hotel built in 1870. Facilities at Fort Churchill State Historic Park include trails, a campground, picnic area, group-use area and access to the Carson River. Visitors can enjoy hiking, historic and environmental education, camping, picnicking, photography and canoeing. The park is located eight miles south of Silver Springs on Alternate U.S. 95. 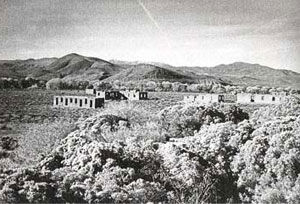 Picture from the book,
Encyclopedia of Indian Wars, by Gregory F. Michno.

Fort Churchill is located along the Carson River, eight miles south of Silver Springs on U.S. 95A. The park is situated 40 miles east of Carson City, and 36 miles west of Fallon.

Caution:  Visitors are advised to enter the park from U.S. 95A, on a short, paved access road. While Fort Churchill Road along the Carson River from U.S. 50 is scenic, it is 16 miles and unpaved. Summers at the fort are hot with daytime highs of 94°F and nighttime lows of 58°F in July. Winters are cold with occasional snow.