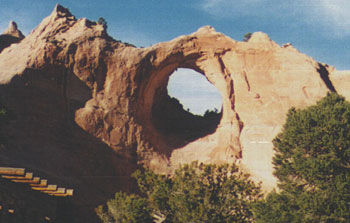 This park near the Navajo Nation Administration Center features the graceful redstone arch for which the capital is named. The Navajo Nation headquarters and other government offices were built in close proximity to this mystical rock formation.

More recently, the Navajo Nation has built a Veterans Memorial at the base of Window Rock to honor the many Navajos who served in the U.S. military.  Many Navajo soldiers are recognized in the annals of history for their role as Code Talkers, whereby they used the Navajo language to create a code that was never broken by the enemy.  Historians credit the Navajo Code Talkers for helping to win World War II.

The park has many symbolic structures:  a circular path outlining the four cardinal directions, 16 angled steel pillars with the names of war veterans, and a healing sanctuary that is used for reflection and solitude that features a fountain made of sandstone.