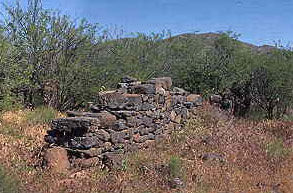 Located in Yavapai County
Site has been obliterated by treasure seekers.

Camp Date Creek was a small post whose purpose was to guard the road between Prescott and Ehrenburg between 1868 and 1874. There were two companies of the 14th infantry stationed here and rumor has it they spent more time fixing the buildings than chasing Indians. They also prospected in their spare time and were instrumental in starting the Martinez district.

Friendly Hualapais told Lt. Col. George Crook that the perpetrators of the Wickenburg Massacre were living among the Apache-Yumas and Apache-Mojaves on the Date Creek Reservation. They also warned Crook that when he went there, Indians planned to come to his quarters under the pretext of talking, and during the customary smoke, one would pull a gun and try to kill him.

Despite the warning, Crook went to Date Creek to investigate the Wickenburg incident and called for a council himself. He did not bring an escort of soldiers, but he had a dozen fully armed packers hovering nearby, ready for action. When all were seated for the council, the Apache leader Ochocama rolled and lit a cigarette. Just then another warrior produced a carbine, but as he fired, Lt. William J. Ross, Crook's aide-de camp, struck the warrior's arm and deflected the shot.

Bedlam erupted. Other Apaches pulled out weapons, and the packers jumped in with revolvers blazing. Seven warriors were slain and four whites were wounded. Some of the Indians, including Ochocama, fled into the mountains.