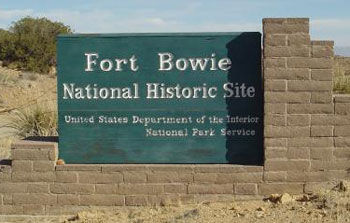 Fort Bowie commemorates in its 1000 acres, the story of the bitter conflict between the Chiricahua Apaches and the United States military. For more than 30 years Fort Bowie and Apache Pass were the focal point of military operations eventually culminating in the surrender of Geronimo in 1886 and the banishment of the Chiricahuas to Florida and Alabama. It was the site of the Bascom Affair, a wagon train massacre, and the battle of Apache Pass, where a large force of Chiricahua Apaches under Mangus Colorados and Cochise fought the California Volunteers.

The remains of Fort Bowie today are carefully preserved, the adobe walls of various post buildings and the ruins of a Butterfield Stage Station. It stands as a lasting monument to the bravery and endurance of U.S. soldiers in paving the way for westward settlement and the taming of the western frontier. It also serves to give us an understanding of the "clash of cultures," one a young emerging nation in pursuit of its "manifest destiny," the other a valiant hunter/gatherer society fighting to preserve its existence. Apache resistance was finally crushed at Fort Bowie, and the result was the end of the Indian wars in the United States.

Visitor Center: 8:00 a.m. to 4:30 p.m., daily. Closed Christmas Day. Ruins Trail hours are from sunrise to sunset. Peak season is from March until May.

From Willcox drive southeast for 20 miles on State #186 to the Fort Bowie turn off, then drive another eight miles on the unpaved road to the Fort Bowie Trailhead. Be prepared to walk the three miles round trip to the ruins and back to your car. From the town of Bowie, the trailhead is located on Apache Pass Road, 13 miles south. The park is 116 miles east of Tucson via I-10, and 227 miles from Phoenix.

Exhibits on the Butterfield mail route, military life at the fort and Apache history are available.

A Western National Parks Association bookstore has maps, posters and books about Apache history, the Butterfield mail route, women's history of the 19th century and military history during this period. 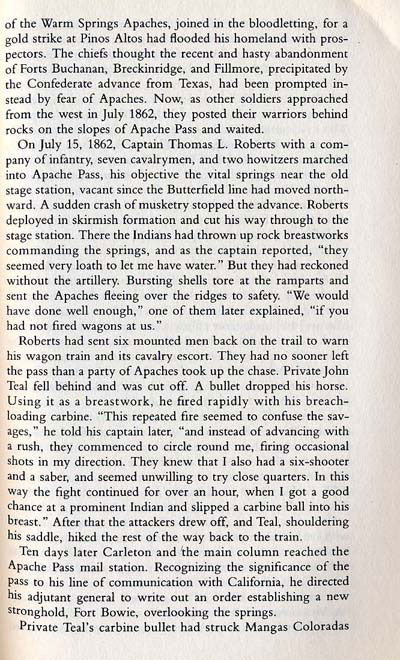 The following story is from the book, On the Border with Crook, by John G. Bourke: 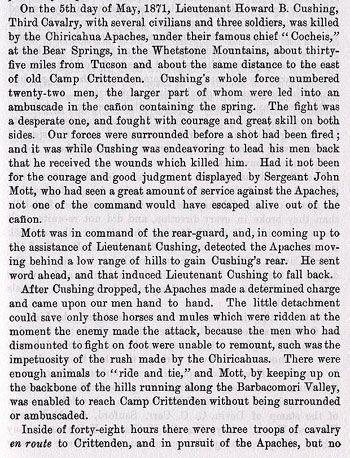 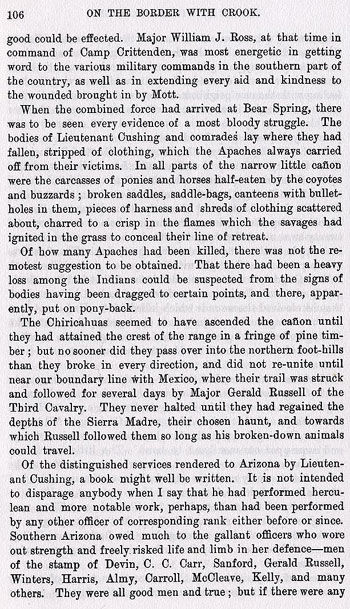 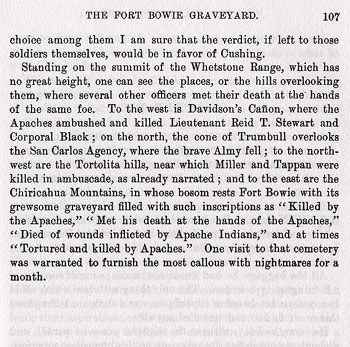 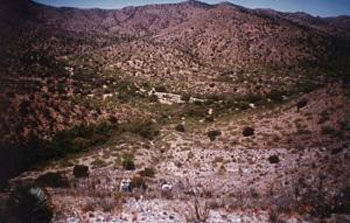 Located in forbidding Apache Pass, a landmark on the Overland Stage road, Fort Bowie played a significant role in the wars with the Chiracahua Apaches. Here in February 1861, even before the fort was established, Lt. George Bascom faced Cochise in a dramatic confrontation that touched off a quarter-century of bloody hostilities between the Chiricahuas and white invaders, and a personal ten-year war between Cochise and the U.S. Army.

General James H. Carleton, leading a Federal army eastward in 1862 to head off the Confederate invasion of New Mexico, founded Fort Bowie, and fought for two days, July 15 and 16, a battle with the Apaches for control of the nearby Apache Springs. Thereafter, until the final surrender of Geronimo, the post operated as a base for scouts, patrols, and major offensives against the Apaches. Most notably, Fort Bowie served as headquarters of Gen. George Crook and his successor Nelson A. Miles in the campaigns deep into Mexico that brought about the surrender of Geronimo and his band. From the Fort Bowie parade grounds in September 1886, Geronimo and his people started on their journey to Florida and imprisonment. The site is operated by the National Park Service.

Gregory F. Michno describes in his book, Encyclopedia of Indian Wars, the 1862 battle at Apache Pass.

After the Confederate invasion of New Mexico, Union Brig. Gen. James H. Carleton marched his brigade of 1,800 California soldiers east to catch the Rebels on the Rio Grande. As the advance guard-126 men of the 1st California Infantry, a detachment of cavalry under Capt. Thomas Roberts, 2 howitzers, and 22 wagons-labored up the western approach to the springs at Apache Pass, between the Chiricahua and Dos Cabezas Mountains, several hundred Apache warriors waited.

Near the springs, the warriors opened fire on the troops from the rocks above. Unable to reach their assailants, the soldiers had no choice but to blast the Indians out of the rocks. Roberts opened up with his two howitzers. Faced with exploding shells and flying rock fragments, the Indians fell back, and Roberts secured the springs.

Roberts sent six horsemen back to Capt. John C. Cremony, who waited at Dragoon Springs with the rest of the cavalry and the supply wagons. On the way, the horsemen ran into more Apaches. One of the soldiers, Pvt. John Teal, lagged behind, and the Indians cut him off from the others and shot his horse. Laying down beside his dying animal, Teal resolved to take at least one Apache with him. With a breech-loader and a pistol, he kept up a steady fusillade, preventing the Indians from rushing him. Teal shot one tall Apache in the chest, and it caused much commotion-the Indians took the warrior away and soon disappeared completely. Teal did not know it, but he had desperately wounded the great Apache leader Mangas Coloradas. The soldier picked up his saddle, bridle, and blanket and walked eight miles to Dragoon Springs, meeting Cremony just before he set out for Apache Pass.

When they arrived at the pass the next morning, Cremony and his men found the Apaches had reoccupied the cliffs. Once again, the artillery blasted them, clearing the path to the springs. The soldiers filled their canteens and departed on 17 July.

The two-day battle cost Roberts and Cremony two men; two others were wounded. Some of the men reported more than 60 Indians killed, but, more realistically, Roberts estimated 9 slain and perhaps 12 wounded.