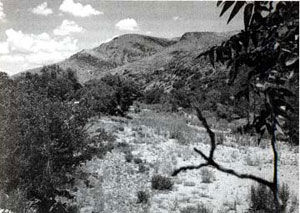 12 January 1880, Hillsboro, New Mexico: Maj. Albert P. Morrow had chased Victorio's Apaches back into Mexico in late October 1870, but in early January 1880, the band was back in New Mexico, and Morrow again took up the chase. On the 10th the major received a report that the Mimbres were in the Black Range, and with detachments of Companies B, C, F, G, H, and M of the 9th Cavalry, he was on the trail 24 hours behind the band. Morrow caugh up with them two days later on upper Percha Creek, west of present Hillsboro, New Mexico, and a sharp fight ensued, lasting from 2 p.m. until dark. Victorio then broke for the San Mateo Mountains, north of Ojo Caliente.

Sgt. D.J. Gross and another enlisted man were killed, and one was wounded. There were no Indian casualties.