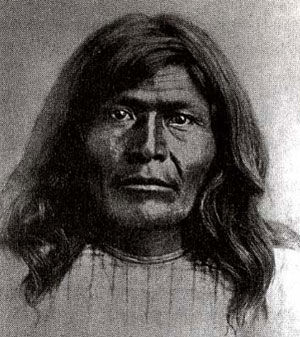 Picture of Chief Victorio from the book,
Encyclopedia of Indian Wars, by Gregory F. Michno.

After the Ojo Caliente raid, Lieutenant Colonel Nathan Dudley took four companies of the 9th Cavalry and a number of Navajo scouts in search of Victorio. On September 18, they tracked the Apache into the upper reaches of nearby Los Animas Canyon, where they came under fire from Victorio's well-entrenched marksmen. During the vicious shootout that followed, five soldiers were killed in action, and three others earned the Congressional Medal of Honor.