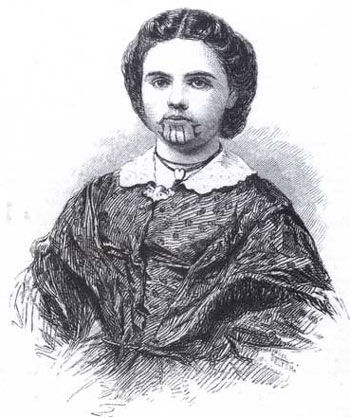 1858 portrait of Olive Oatman from the book,
Encyclopedia of American Indian Wars, by Jerry Keenan.

In March, 1851, a small wagon train consisting of three Missouri families was crossing present-day Arizona en route to California. When the train split up, Royse Oatman, his wife, and their seven children carried on alone. On the Gila River, west of Yuma, they were approached by an estimated nineteen Yavapai who murdered the adults and four of the children. They left one wounded boy for dead and captured seven-year-old Mary Ann and fourteen-year-old Olive Ann, who were in turn, sold to the Mojave. Mary Ann died in captivity, but Olive Ann was rescued in 1856, having had her face heavily tattooed with markings identifying her as a slave. Despite the disfigurement, she attended college in California, married in 1865 and lived until 1903. However, she rarely appeared in public without her face being covered.