Recently Republic of Texas Press released Stephen L. Moore's Savage Frontier; Rangers, Riflemen, and Indian Wars in Texas, Volume I and Clay Perkins, author of The Fort in Fort Worth recommended it to me. Once I got my hands on it, I couldn't stop until I had located the sites of the dozens of events he had chronicled on a highway map. Soon the Northeast and Southeast Texas maps were produced with the help of Bill Groneman's Battlefields of Texas and Texas Forts by Wayne Lease although I haven't searched the counties' historical highway markers to complete the job.

Click on each map to bring up the full version of that particular Blood Trail. 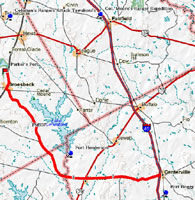 Thanksgiving weekend I took the opportunity to visit my family in Houston and drove down I-35 exiting Highway 171 to Mexia then dropping down 14 to visit Parker's Fort. Actually I had very little choice; southbound traffic was backed up for miles coming into Hillsboro and my impatience made my decision. I took a beautiful drive down Highway 937 from Groesbeck which passes just west of the site of old Fort Henderson and joined Highway 7 into Marquez. I continued a short while onto Centerville, the site of old Fort Boggy, where I caught I-45 to finish my trip. 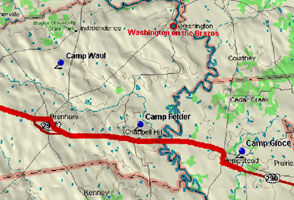 On Thanksgiving Sunday, I headed back to Fort Worth, taking Highway 290 from Houston to Hempstead. There I began my exploration of the historical countryside Moore described. The first leg from Hempstead through Chappell Hill then Brenham was smooth and beautiful though eastbound traffic coming into Brenham was severely backed up. 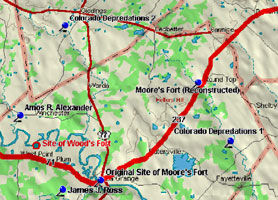 I breezed along in a general southwesterly direction taking the 237 exit south out of Burton to Round Top where the reconstructed Moore's Fort can be visited (as shown in the above map.) As I headed southwest, passing the scene of the first Colorado Depredations on my left, I marveled at the tranquility and beauty of my drive through the golden autumn leaves that filled my windshield as I dropped into LaGrange, the original site of Moore's Fort.

There I caught Highway 71 west, passing just above the spot where, in April of 1826, James J. Ross led a group of Rangers including John J. Tumlinson, Jr. against a band of marauding Wichitas (Tawakonis). In the early afternoon, I continued west, driving just beneath the site of Wood's Fort and just a little more below the 1835 Wichita (Keechi and Tawakonis) and probably Comanche attack against the Alexander family. These slayings set off a series of events that involved Choctaw Tom and several Ranger Companies from the Brazos and Colorado settlements which led to the Parker's Fort Massacre and the beginning of the forty-year Comanche/Texas War. 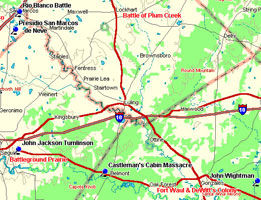 Below me to the southwest lies the countryside that makes up the leg that goes into Luling and includes Lockhart, the site of the Battle of Plum Creek, perhaps the Ranger's most significant victory. South of I-10 lies the site where John Wightman was killed and mutilated in an Indian attack in 1826.

A little further west in Gonzales lies Fort Waul and DeWitt's Colony and the 1835 massacre at Castleman Cabin in Belmont.

James Milford Day, pictured above, one of Guadalupe County's earliest settlers, was seriously wounded in a gun battle with Cordova's rebels on March 30, 1839.

We taken them home but Milford had a lingering hard and painful time before he recovered, and after he was thought to be well his hip rose and several pieces of bone worked out. Then for many years he had to undergo the same pain and suffering from his hip rising and pieces of slivered bones working out. He finally recovered after years of pain and suffering, but it made a cripple of him for life. But he is still living at this writing and limping around on one short leg and has seen as many ups and down since that time as any man of his age.

Finally near Seguin lies the site of the Battleground Prairie where General Edward Burleson's men defeated Vicente Cordova with his Mexican and Indian contingency in 1839. This is also near where, in 1823, John Jackson Tumlinson was killed by Indians and his sons, future Ranger Captain John J. Tumlinson, Jr. and Joseph, avenged his murder. As I drove on where 71 turns more to the north toward Bastrop, I promised I would visit the Plum Creek Battleground Leg another day. 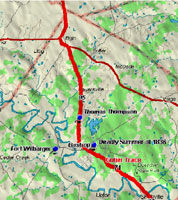 Crossing the Gotier Trace and entering Bastrop, just east of the site of Fort Wilbarger, the beautiful countryside gives no clue to the murderous circumstances of 1836. Nearly a dozen of the local residents were dismembered and scalped by Indians in a ferocious raid, echoing a previous 1829 raid on the Thompson farm which resulted in Stephen Austin ordering Ranger Captains Oliver Jones and Bartlett Sims as well as Harvey S. Brown, to lead companies in pursuit of the marauders. 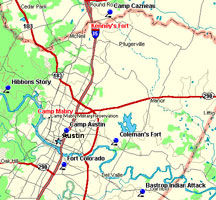 Heading north on 95 toward Elgin, I struggled through a little bit of traffic congestion, warning me that I would find no pleasure in touring further west, but realizing that under the pavement of Greater Austin, lies the site of Coleman's Fort. It also includes the Bastrop Indian Attack, southeast of the fort, where the remuda was stolen to the northeast and the sites of Camps Austin and Mabry. Just to the northwest of town lies the site of the Hibbons story which contains Ranger Noah Smithwick's account of his company's successful revenge of Texas' first Comanche raid. 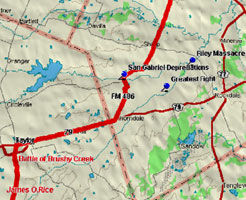 Continuing north on 95, I passed the marker for James O. Rice, who, in 1839, fought Mexican troops under Manuel Flores on the San Gabriel River. He captured documents proving that the Mexican government had encouraged, through their agent Vicente Cordova, an Indian uprising against the American settlers in Texas, resulting in the Cherokee War. Just north of the site of the Battle of Brushy Creek lies the little town of Taylor, where I took Highway 79 back to the east to Thorndale and caught FM 486 North. This route passes close to the San Gabriel Depredations as well as The Greatest Fight and the Riley Massacre. 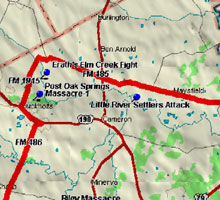 I continued north on FM 486 to Buckholts and caught FM 1915 so I could pass just west of the Post Oak Springs Massacre 1 and Erath's Elm Creek Fight. I was also avoiding Temple's urban sprawl which I assumed took the romance out of visiting the beautiful Little River Fort settlement and all its associated battles; although my route would take me just north of one of the major fights those settlers incurred. 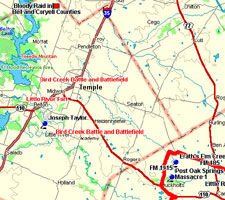 I confess I turned north on 77 and didn't continue the route I have marked to Forts Nashville and Milam as well as the leg to Fort Sam Houston. 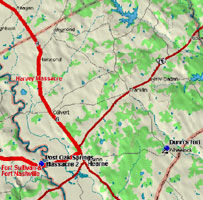 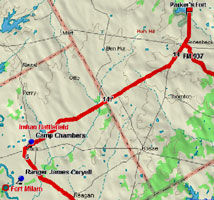 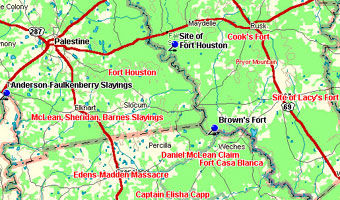 I was anxious to get to Waco and revisit the Texas Ranger Museum at Fort Fisher. My route from Hempstead to FM 485 took about four and a half hours of driving time, in other words, this drive probably works better as an overnight trip. This would give you plenty of time to tour Parker's Fort and make the beautiful drive back to Centerville or visit the George Bush Presidential Library and Museum at Texas A&M. You can figure that I'll update this trip soon. Keep an eye out! Also, I hope to hear from some of you about your road trips and will try to integrate your stories into my descriptions.