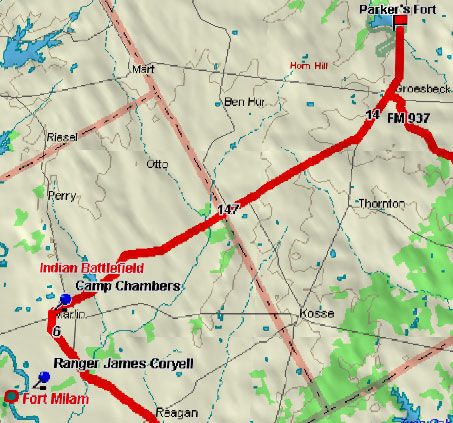 Marker Title: Fort Milam
City: Marlin
County: Falls
Marker Location: From Marlin, take FM 712 about 4 mi. SW to FM 2027, then Go south 2 mi. to local road. Take road east .7 mi. to Brazos River Falls.
Marker Text: Built at the capital of Robertson's Colony named in 1834 Sarahville De Viesca in honor of his mother Sarah Robertson and the Governor of Texas, Agustin DeViesca. Soon after its name was changed to Milam, December 27, 1835, a ranging company built the fort as a protection to the settlers against hostile Indians.

May 10th, 1837, a body of about two hundNative Americans made a murder raid through the Brazos settlements including the Post Oak Springs Massacre. Ranger James Coryell and a few other men went down the road to Perry Creek to cut a bee tree. They were sitting around eating honey when about a dozen Caddo Indians attacked them. Coryell stood and received his mortal wounds. His companions retreated to the fort as the Indians began scalping him.

A regular army post near the site of present-day Marlin in Falls County, Fort Chambers was established in May or June of 1840 on the east bank of the Brazos River, two miles north of the present-day Highway 7 crossing. Nothing remains.

Marker Title: Indian Battlefield
City: Marlin
County: Falls
Year Marker Erected: 1963
Marker Location: From Marlin, Take SH 6 north about 6.5 mi.
Marker Text: At this site, near the pioneer home of George Morgan, a battle took place, January 16, 1839, between settlers in this region and Indians under Chief Jose Maria in which the colonists were defeated. A treaty with these Indians made soon after brought comparative peace to this region.