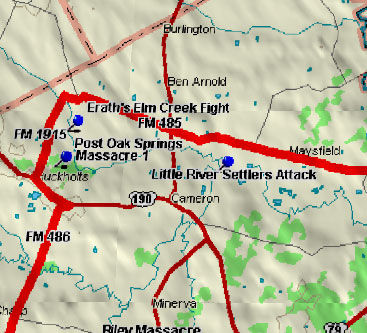 "When they approached within two hundred yards, they divided, one half to the right, the other half to the left-passed us shooting at us-and pursued and killed Crouch and Davidson, who were some three hundred yards ahead of us. Before they could gain, those of us who were near the wagon made our way to some timber that was near. The Indians drove off our cattle and took one horse; the balance of the company escaped without further injury."

The Indians scalped Crouch and Davidson after killing them and began to fight over who would keep the scalps and booty. Childers took this opportunity to lead his party to safety under the cover of some oak trees. The Indians turned back and headed for the Little River houses where they found the remaining families. Daniel Monroe relates:

"They used guns, bows and arrows, and spears. Whilst defending themselves in their house against the Indians, William Smith was shot on the outside of the door through the leg by a rifle ball. They shot and killed deponent's horse whilst tied to the house-killed many cattle-drove the balance off-and plundered a wagon."

A few days later, Judge O.T. Tyler performed last rites at the gravesite on the prairie where the killings took place.

January 7th, 1837, Sergeant Erath had ten horsebacked Rangers (all they had was ten horses). Erath's men could hear the Indians coughing. They crept up the river bank until they had a good view. Erath recalled that all were:

"dressed, a number of them with hats on, and busy breaking brush and gathering wood to make fires. We dodged back to the low ground, but advanced toward them, it not yet being broad daylight. Our sight of them revealed the fact that we had to deal with the formidable kind, about a hundred strong. There was not time to retire or consult. Everyone had been quite willing to acquiesce in my actions and orders up to this time. To apprehensions expressed I had answered that we were employed by the government to protect the citizens, and let the result of our attempt be what it might, the Indians would at least be interfered with and delayed from going farther down the country toward the settlements."

They took a position under the river bank twenty five yards from the camp and on command began firing. Within a few minutes, David Clark and Frank Childers fell dead. The remainder broke into two groups, one retreated while the other covered them with fire.

The following three pages are from the book, Texas Frontier, by Ty Cashion. 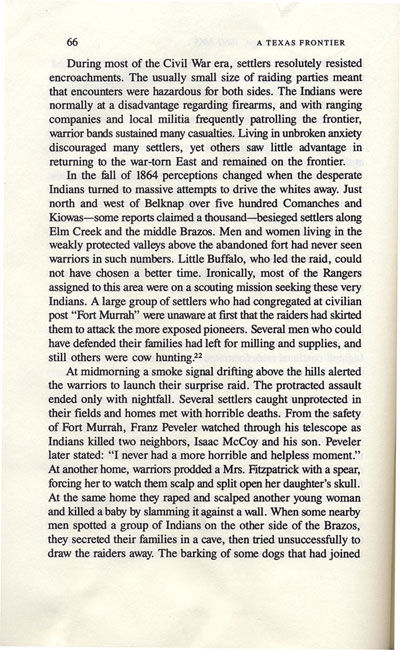 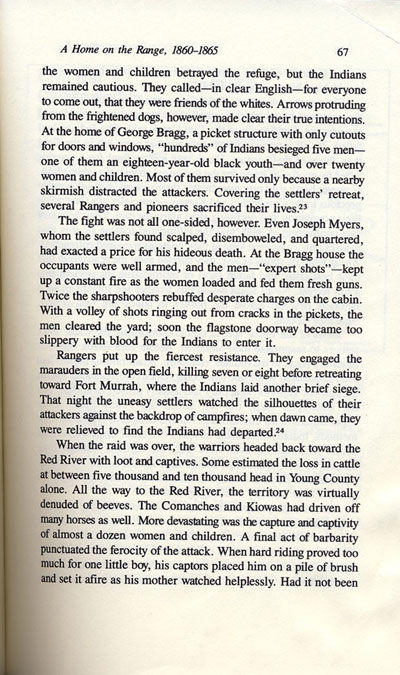 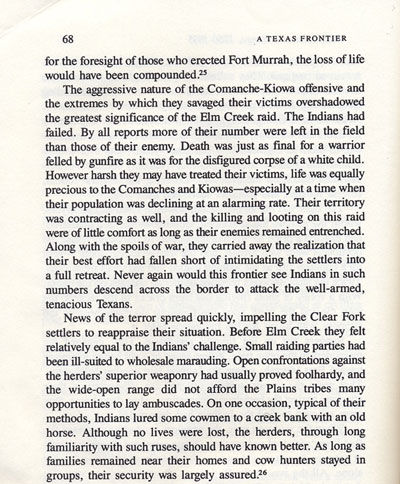