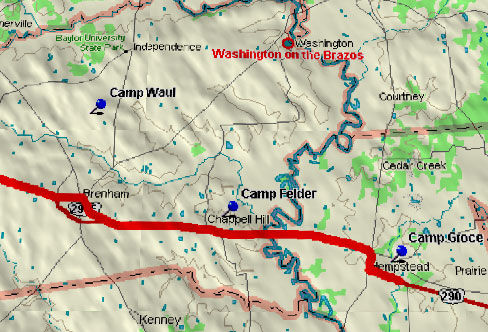 Marker Title: Washington-on-the-Brazos
City: Washington
County: Washington
Marker Location: In Washington-on-the-Brazos State Park, Washington.
Marker Text: This frontier village was the setting for the convention that on March 2, 1836, wrote and signed the immortal Texas Declaration of Independence in this first capital of the Republic of Texas, the constitution was drawn, the government organized. However, Washington was a target for Santa Anna's army, and on March 17 the government had to flee. After the Texas victory at San Jacinto, April 21, 1836, Washington was again proposed as capital, but Houston was selected instead. In 1842, the Republic's government returned to Washington and remained here during the term of Anson Jones, fourth and last president of Texas. Anson Jones, native of Massachusetts, in 1833 had come to Texas, where he at once began the practice of his profession, medicine. At the Battle of San Jacinto, in the Texas Revolution, he took the field as surgeon of the 2nd Regiment. Later he served in the Texas Congress, was minister to the United States, Secretary of State, a senator, and finally the president from 1844 to 1846. Upon annexation of Texas to the United States, Dr. Jones retired to Barrington, his plantation near Washington. He died in Houston on January 9, 1858.

Colonel Leonard W. Groce's Liendo plantation stood on Clear Creek two miles east of present-day Hempstead in Waller County. Camp Groce, or Camp Liendo as it was frequently referred to, was probably established in 1862 to house Union soldiers captured by Confederate forces at the Battle of Galveston. Camp Groce served as a recruiting station for the Confederate Army and a refugee center for women and children fleeing southern states. In December of 1864, all of the prisoners at Camp Groce were paroled and the camp was permanently abandoned as a military prison as nearly 500 prisoners were taken to the port of Galveston where they were turned over to Union forces.

Camp Felder was a Confederate camp for Union prisoners of war. It was located near present-day Chappell Hill in Washington County and was named for Gabriel Felder, owner of the Brazos River bottomland where the camp was established.

Camp Waul was a Confederate training camp seven miles north of Brenham and was named for Thomas Neville Waul. Waul's Texas Legion was organized on May 13, 1862 and ordered out of state in August that year.

The camp information above is from the book, Texas Forts, by Wayne Lease.