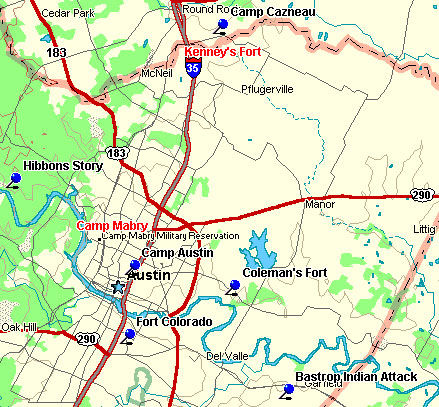 Located adjacent to Kenney's Fort, east of present-day Round Rock, Camp Cazneau was on Brushy Creek at the Double File Trail Crossing created by Indians passing through the area. It was used in 1840 by the Travis Guards and Rifles under the command of George W. Bonnell when he led raids against the Comanches in May and June of that year.

Marker Title: Kenney's Fort
Address: US 79, 2.5 mi. E
City: Round Rock
County: Williamson
Marker Location: US 79, 2.5 mi. E of Round Rock
Marker Text: 1/2 mile South to the site of Kenney's Fort First settlement in Williamson County. Erected as a home by Dr. Thomas Kenney and Joseph Barnhart in the spring of 1839. Served as a place of defense during Indian raids. Rendezvous of the Santa Fe Expedition, 1841. Here the archives of the Republic of Texas en route to Washington-on-the-Brazos were captured on December 31, 1842 and returned to Austin.

In 1840, the Indians raided Kenney's Fort, and a description of the incident appears in the book Indian Depredations in Texas, by J.W. Wilbarger. 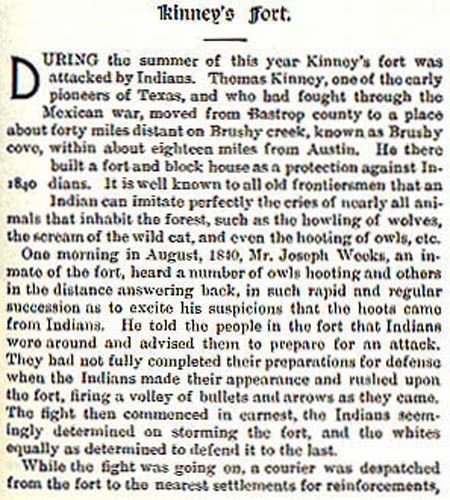 The following story is from the book, The Texas Rangers, by Walter Prescott Webb:

The Rangers were an irregular body; they were mounted; they furnished their own horses and arms; they had no surgeon, no flag, none of the paraphernalia of the regular service. They were distinct from the regular army and also from the militia… 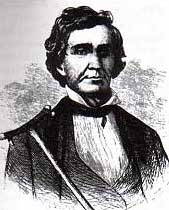 Major Robert McAlpin Williamson
The crutch (pictured above) was needed because he wore a wooden leg thus the nickname Three-legged Willie. He previously commanded a Ranger company in 1835 in Col. Moore's battalion. He liked to tell a story about laying an ambush for some Indians that had been trailing his company for days. He ordered an extra large camp fire built that evening and had the men wrap their blankets around logs so it would appear the whole company was asleep. The Indians attacked their prey with knives and by the time they realized they were striking wooden logs, they were wiped out by Ranger gunfire.

The officers of this ranging corps were elected on the night of November 28. The captains were Isaac W. Burton, William H. Arrington, and John J. Tumlinson. R.M. Williamson and James Kerr were nominated for the office of major. Williamson was elected. Noah Smithwick served under Tumlinson and R.M. Williamson, and has left us some account of what these Rangers did. Texas had an army of five or six hundred men, and was preparing to invade Mexico. The Indians took advantage of the situation and began to raid the frontier and murder the citizens. 'So,' says Smithwick, 'the government provided for their protection as best it could with the means at its disposal, graciously permitting the citizens to protect themselves by organizing and equipping ranging companies.'Since Smithwick's account gives such an excellent idea of the nature of the Rangers' work in this early period, it is given in his own words. Click on picture below for his account.

In 1846, during the Mexican War, a detachment of the 2nd Dragoons of the U.S. Army was moved from Indian Territory to Austin. Their camp, like many other holding camps at the time had no name. Two years later, the camp was named Camp Austin and was more involved with paperwork than patrols. When the Civil War broke out, the camps arsenal manufactured cannons and cartridges. Following the Civil War, 26 regiments of Federal infantry and cavalry were stationed here to restore order in Texas. Camp Austin at this time consisted mostly of tents with a mess hall, kitchen, bakery, and quarters. In August of 1875, the camp's garrison was closed and troops were moved to the frontier. More

In April of 1837 at Fort Coleman, Lieutenant Nicholas Wren and a handful of men took the company's remuda up the creek to graze. A band of Indians swept down at a full run, yelling and whistling, stampeding the herd. A portion of the horses ran toward the fort and Ranger Smithwick opened the gate. Ranger Felix McCluskey had just mounted his horse at the fort and took out after the Indians and the rest of the herd. He was joined by Smithwick who later wrote:

"Old Isaac Castner, who had left the service and was then living at Hornsby's, had been up to the fort and was jogging along leisurely on his return. He had crossed the creek and gained the open prairie when he heard the clattering of hoofs coming in his rear. He turned in his saddle and took one look behind. The frightened animals pursued by McCluskey and myself were bearing right down on him. We had lost our hats in the wild race, and our hair flying in the wind gave us much the appearance of Indians. Uncle Isaac, who, as previously stated, weighed about 200 pounds, laid whip to his horse, which was a good animal, and led off across the prairie to Hornsby's Station, about a mile distance, the horses following in his wake and we trying to get in ahead of them. McCluskey's sense of fun took in the situation. "Be Jasus," said he, "look at him run!" and the reckless creature could not refrain from giving a war whoop to help the old man along.

Hearing the racket, the men at Hornsby's fort ran out, and seeing the chase, threw the gate open. Breathless from fright and exhaustion, Castner ran in, gasping, "Injuns.""

On the 28th of April, the Indians raided Fort Smith's remuda on the Little River, escaping with an even larger portion of Captain Daniel Monroe's Rangers horses but Lieutenant Wren was singled out to be reprimanded by President Houston for allowing his horses to graze outside the fort without mounted guards. An early valuable lesson not forgotten by later Rangers.

After Texas gained its independence, Sam Houston authorized the formation of Texas Rangers and the establishment of blockhouses to protect settlers from Indian attacks. Two facilities were near Austin in 1836. The Texas Rangers established Camp Coleman, or Fort Colorado, as it would later be called. It was on high ground above the north bank of the Colorado River just west of Walnut Creek and six miles southeast of Austin in present-day Travis County. Built during 1836 by Colonel Robert M. Coleman, it was first garrisoned by two companies of his battalion. Lieutenant William H. Moore was the last commander of the fort when it was abandoned in April 1838. There are no remains of the blockhouse, abandoned as the frontier moved westward.

Coleman wrote to Senator Sterling Robertson on October 16, describing Fort Colorado and the deployment of his new ranger battalion.

I have selected the most beautiful site I ever saw for the purpose. It is immediately under the foot of the mountains. The eminence is never the less commanding, and in every way suited to the object in view.

I have ordered Capt. Batton to build a block house at or near Milam, where he will station one half of his company. The other half of the company under the 1st Lieut. is also ordered to build a block house at, or near, the three forks of the Little River. I shall in a short time commence a block house at the head of San Marcos, and one at the crossing of the Guadalupe, by which means I hope to be able to give protection to the whole frontier west of the Brazos.

May 14th, 1836, a band of ten to fifteen Comanches carrying a white flag approached men working in the Hornsby's field. John Williams and Howell Haggard were speared and shot down. The other men took cover and the Indians eventually decided against another attack and departed with a hundred head of cattle from the neighborhood.

A portion of the above fort and camp information is from the book, Texas Forts, by Wayne Lease.