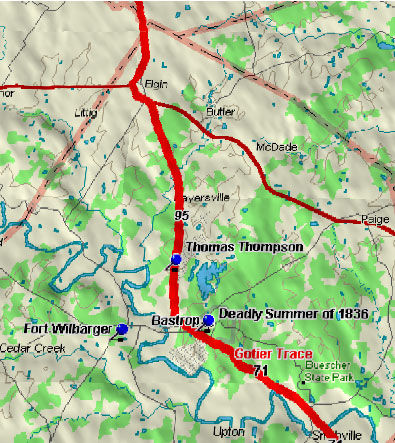 Marker Title: The Gotier Trace
Address: Entrance to Bastrop State Park, SH 21 at Loop 150
City: Bastrop
County: Bastrop
Year Marker Erected: 1967
Marker Location: Entrance to Bastrop State Park, Loop 150 & SH 21
Marker Text: Originated in 1820s. Crossed the present counties of Austin, Washington, Fayette, Lee, Bastrop; joined San Felipe, capital of Stephen F. Austin's colony, with Bastrop. Marked by James Gotier, a settler who (with several in his family) died in an Indian massacre near this trace in 1837. Like most early Texas roads, this was only a marked route which travelers could follow-- dusty in droughts, boggy in rains. From such traces, wagon roads and cattle trails, Texas has developed over 67,000 miles of fine paved highways-- a system recognized as nation's finest. (1967)

Deadly Summer of 1836
* items are taken directly from the book, Savage Frontier, by Stephen L. Moore.

On June 7 Indians plundered the house of Nathaniel Moore, and on the next day, June 8, attacked the house of Thomas Moore. Veteran ranger Conrad Rohrer was outside Moore's house at this moment attempting to saddle his horse. Rohrer had served Sam Houston's army as a special wagon master and had been among Captain John Tumlinson's early rangers during the revolution. He was shot down dead in the yard.

In another depredation, Bastrop area citizen Matthew Duty was killed while riding out alone one night to look over his crops. He had barely gotten out of sight of town when shots were heard. His horse returned on the run, its saddle splattered with blood. When an armed party rode out to look for Duty, he was found murdered and scalped.

Also during the summer of 1836, Indians killed Texas pioneer John Edwards, who had been traveling in company with Bartholomew Manlove from Bastrop to Washington. Manlove rode for his life,but the Indians killed Edwards. He was repeatedly speared and then scalped. The Indians took his horse and rifle.

Laban and Jarrett Menefee and John Marlin fought four Indians near the Colorado River. One Indian was killed and all three men claimed credit. They examined the body and found two bullet holes no more than two inches apart. They went a little further and were attacked by more Indians in which they managed to kill two. They chased the remainder into a timber thicket, killing one more in the process.

*Harris, Blakely and Another

Also at this place, Harris, Blakely and another man came down the river to slaughter a cow when they were attacked in a ravine. Blakely escaped but Harris and the other man were shot and dismembered and their entrails were strewn around the bushes. They cut off their arms and removed their hearts, which were apparently eaten by the Indians.

Joseph was attacked by forty or more Indians, reaching his own house before he died. His wife drug him to safety before he could be mutilated or scalped. His brother attacked the camp with some volunteers and managed to kill the chief before being killed. The others in his party were wounded which may explain why they scalped the Indian. End of Deadly Summer of 1836.

Josiah had joined Stephen F. Austin's colony in 1828 and received a Mexican land grant in present-day Bastrop County where he settled in the community of Utley near the Colorado River. The Wilbarger's home consisted of a cabin and a stockade that may have been a family fort. He also prepared a cave in the banks of the Colorado River for shelter in case of Indian attack. Little else is known about the fort. At one time there was a commemorative marker at the site of Wilbarger Bend in the Colorado. If the marker still exists, it is now on private property.

The balance of 1827 and 1828 found Austin Colony settlers and the native Indians on somewhat better relations. In July 1829, however, a battle was fought against Indians who had taken control of Thomas Thompson's small farm near present Bastrop on the Colorado River. Thompson led then men in a fight against the Indians, killing four and chasing away the others. Colonel Austin ordered two volunteer companies of fifty men raised. The companies were under Captains Oliver Jones and Bartlett Sims and under the supervision of Colonel Abner Kuykendall. Captain Harvey S. Brown raised another volunteer company during this time due to murders and depredations committed by Indians around the Gonzales area. Although Captain Sims and his company scouted extensively in pursuit of the Indians, these combined forces only managed to kill one Indian while on their offensive.