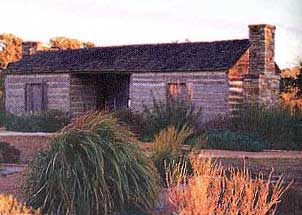 Moore's Fort, near La Grange in Fayette County, was a twin blockhouse built in 1828 by John Henry Moore as a place of defense against Indians. The Texas Centennial Commission placed a marker at the site in 1936. The American Legion of La Grange occupied the site in 1994.

Buildings from Moore's Fort have been rebuilt in the nearby community of Round Top.

Round Top features historic Anglo and German-Texan structures from the 1820s to 1870s. Henkel Square preserves a collection of relocated early homes. Five miles north, the International Festival Institute stages summer concerts and workshops. Four miles to the east, the Winedale Historial Center preserves a 19th-century farmstead, managed by the University of Texas for the study of Central Texas history and culture. 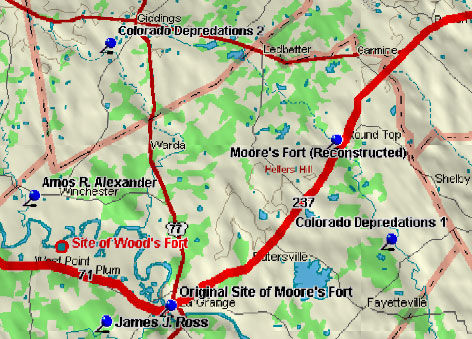 In 1828, John Henry Moore built two blockhouses within what are now the city limits of La Grange. Area settlers were also allowed to use this shelter as a defense against the Indians. Buildings from Moore's Fort have been rebuilt in the nearby community of Round Top.

February 1837, a party of forty Comanches came into Fayette County taking horses and captives. They killed the Honorable John G. Robison and his brother, Walter. The next day, the judge's son, Joel, a veteran of San Jacinto and famous for having captured Santa Anna, heard of the raiding and went out looking for his father and uncle. He said:
"I had scarcely gone a mile, when, in the open post oak woods I found my father's cart and oxen standing in the road. The groceries were also in the cart. But neither father nor uncle were there. I had now no doubt of their fate. The conviction that they were murdered shot into my heart like a thunder bolt. Riding on a few yards further, I discovered buzzards collecting near the road. My approach scared them away and revealed to my sight the body of my father, nude, scalped and mutilated. I dismounted and sat down by the body. After recovering a little from the shock, I looked around for uncle. I found his body, also stripped, scalped and mangled, about fifty yards from my father's remains."

February 1837, James Gotcher and his two sons were away from the house and cutting wood on the river bottom when Indians attacked their house, killing and scalping a young boy and capturing a little girl. Inside the house were two ladies, Nancy Gotcher and Mrs. Crawford, and several children. The Indians rushed the house, killed Mrs. Gotcher and took Mrs. Crawford and the children captive. The men, hearing the commotion, ran to the house and attempted to fight but were cut down though one of the sons managed to rip open the throat of one of the warriors with his teeth. Mrs. Crawford and the children suffered horribly for two years in captivity before being ransomed by a trader named Spalding at Holland Coffee's station. Spalding married the widow, took the children then settled in Bastrop County.

The most serious encounter of 1826 occurred when Tawakoni Indians came into the settlements stealing horses and hunting the Tonkawa Indians they so hated. The Tonkawa name was derived from "They all stay together" but has been translated as "men who eat men." They were also reported to have killed and scalped a Mexican resident while on their depredation. The Indians made their camp in the bed of Ross Creek in present Fayette County near the town that later became La Grange. Captain James J. Ross led thirty-one militiamen out to fight these Indians on April 4, 1826. His party was composed of many future Fayette County settlers, including John J. Tumlinson Jr., John Cryer, and S. A. Anderson. When Ross's men raided the Indian camp, they caught them by surprise. Some of the Indians were dancing around with fresh scalps, while others were parching corn or lying down. Of an estimated sixteen Indians, the Texans killed eight and wounded most of the others.

From the Falls of the Brazos, the townspeople selected Samuel McFall to run ahead and warn the Bastrop citizens. Bastrop was the uppermost white settlement of any size on the Colorado River in 1835. The local residents had been forced to band together to protect themselves from neighboring Waco, Tawakoni, Kichai, and Comanche raids. Consequently, a strong log stockade or fort was erected in the center of the little town. In the event of a serious Indian attack, the townspeople could take shelter inside.

McFall, a lean and quick man of six feet, three inches, ran the distance on foot and is fabled to have been a faster runner than most saddle horses of the time. Before he could arrive, a party of eight Indians made a vicious attack on June 1. On the road from San Felipe to Bastrop, they attacked the wagon of Amos R. Alexander near Cummins Creek.

Alexander, a Pennsylvania native, had brought his wife and two sons to Texas in the spring of 1833. They settled in Bastrop and eventually opened a store and hotel. In April 1835 Amos and son Amos Jr. went to the coast to get a supply of goods they had ordered. They hired two other men to serve as teamsters to haul their goods. The Alexanders were attacked by Indians on June 1 at Pin Oak Creek about thirty-five miles from Bastrop.

Amos Alexander was killed outright. His son was on horseback and was shot through the body. The younger Alexander rode full speed from the scene of the attack toward Moore's Fort at La Grange, the last town they had passed. He met the second wagon being hauled by the two brothers his father had hired as teamsters. The three started for Moore's Fort, but the young Alexander died from his wounds. His body was laid under a tree and covered with leaves and moss.