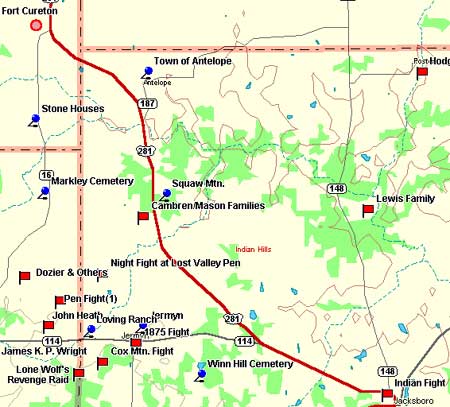 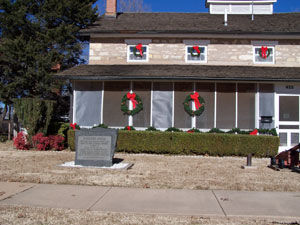 Christmas at the Sherman House 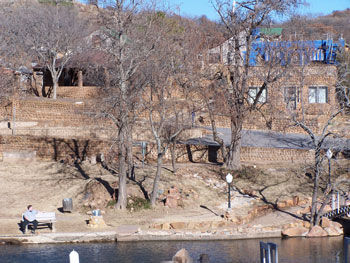 Highway 148 shadows the military road, stage and telegraph line to Fort Sill and it passes west of the historical marker for Fort Buffalo Springs on the way to Henrietta. Visit Geronimo's grave and Sherman's house at Fort Sill where he personally arrested the Kiowa chiefs and while there, tour Medicine Park and Mount Scott. 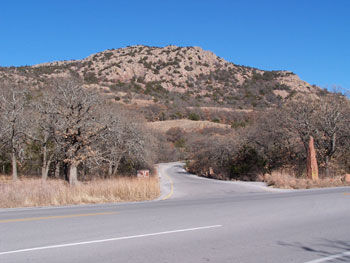 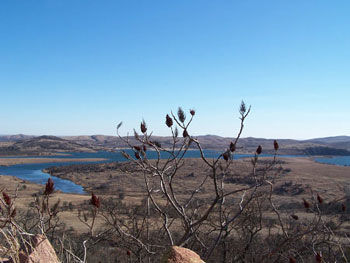 View from top of Mount Scott 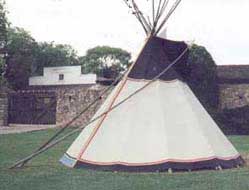 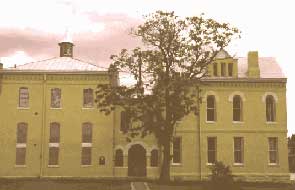 Hwy. 281 to Wichita Falls is another good route to Fort Sill. For more detailed information, see the Red River road trip. Just beyond the Y to Jermyn lies a roadside park on the west side of the highway offering a terrific view of Lost Valley. The missing historical marker once read:

Marked by "Seven Blue Hills" in distance. To right is Spy Knob -- a lookout during pioneer days. Noted atrocity site: In 1857, the Cambren and Mason families, settlers, were victims of white renegades and Indians. On May 18, 1871, on western rim, teamsters of Warren Wagon Train were killed soon after General W. T. Sherman of the U.S. Army had traveled safely through this valley. On July 12, 1874, the escort part of Major John B. Jones, Commander of the Frontier Battalion, Texas Rangers, was ambushed here, with two men killed. In later years, this has been peaceful farm-ranch area. (1970)

A little further north on 281 take FM 2190 a couple of miles east to the historical marker for the so-called "Squaw Mountain" Community. Though slightly mislocated, the related story seems to correspond with what is generally determined to be the last Indian fight in North Texas. Those pressed for time can proceed west on Hwy. 114 to Jermyn and begin their return trip south on 1191.

Hwy. 287 northwest of Wichita Falls is a traditional road to the Panhandle and the battle sites of Mackenzie's Raiders. The first stop is Quanah, named after the famous Comanche chief, and intersects with historical Hwy. 6 which wanders south through Albany on its way to Galveston Bay. It was recently the subject of a road trip written by Paul Burka in Texas Monthly. North of Doan's Crossing on 283 shadows the old trail to Dodge City and passes between some of the greatest battle sites in the American/Indian War. The first stop going this direction is Altus, where they have an interesting museum.