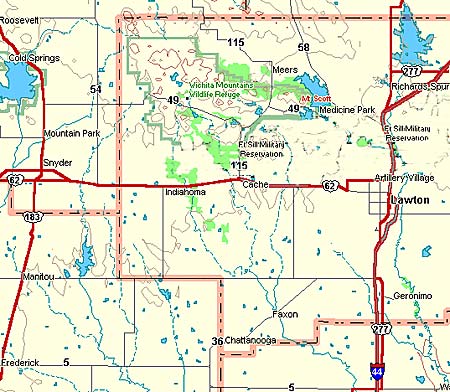 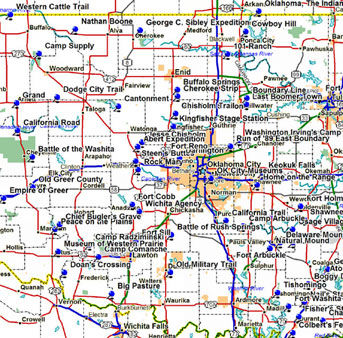 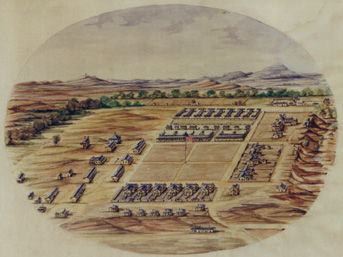 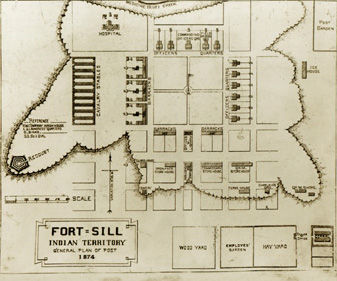 From Interstate 44, take exit 41 (Key Gate) and turn west on Sheridan Road. Turn right onto Randolph Road and drive .6 mile. Turn right onto Chickasha Road, them immediately left onto Quanah Road. The museum visitors' center is Building 435 on your left. The second building on your left, B437, is the museum administrative office.

Admission to the Fort Sill Museum is free and open to the public Tuesday through Saturday, 9:00 a.m. to 5:00 p.m. We are closed on Sunday and Monday. 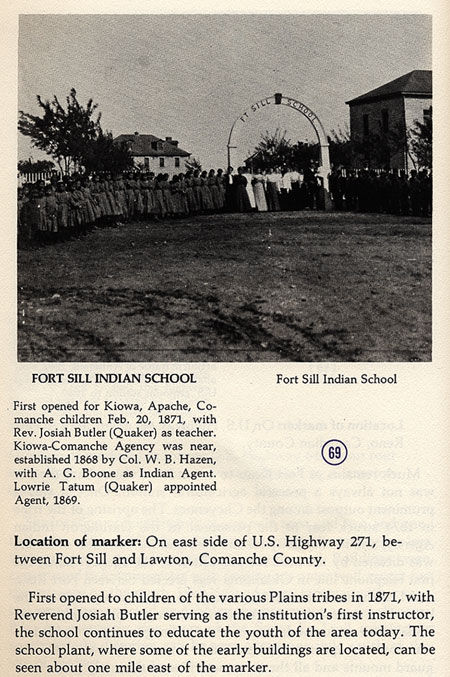 The site of Fort Sill was staked out on January 8, 1869 by Maj. Gen. Philip H. Sheridan who led a Campaign into Indian Territory to stop hostile tribes from raiding border settlements in Texas Kansas.

At first the garrison was called Camp Wichita and referred to by the Indians as "the Soldier House at Medicine Bluffs." Sheridan later named it in honor of his West Point classmate and friend, Brig. Gen. Joshua W. Sill, who was killed during the Civil War. The first post commander was Brevet Maj. Gen. Benjamin Grierson and the first Indian agent was Colonel Albert Gallatin Boone, grandson of Daniel Boone.

Several months after the establishment of Fort Sill, President Grant approved a peace policy placing responsibility for the Southwest tribes under Quaker Indian agents. Fort Sill soldiers were restricted from taking punitive action against the Indians who interpreted this as a sign of weakness. They resumed raiding the Texas frontier and used Fort Sill as a sanctuary. In 1871 General of the Army William Tecumseh Sherman arrived at Fort Sill to find several Kiowa chiefs boasting about a wagon train massacre. When Sherman ordered their arrest during a meeting on Grierson's porch two of the Indians attempted to assassinate him. In memory of the event, the Commanding General's quarters were dubbed Sherman House.

In June 1874 the Comanches, Kiowas and Southern Cheyennes went on the warpath and the South Plains shook with the hoofbeats of Indian raiders. The resulting Red River Campaign, which lasted a year, was a war of attrition involving relentless pursuit by converging military columns.

Without a chance to graze their livestock and faced with a disappearance of the great buffalo herds, the hostile tribes eventually surrendered. Quanah Parker and his Quohada Comanches were the last to abandon the struggle and their arrival at Fort Sill in June 1875 marked the end of Indian warfare on the south Plains.

Until the territory opened for settlement, Fort Sill's mission was one of law enforcement and soldiers protected the Indians from outlaws, squatters and cattle rustlers.

Above is the site of the exciting showdown where Sherman arrested the Kiowa chiefs responsible for the Warren Wagon Train massacre. 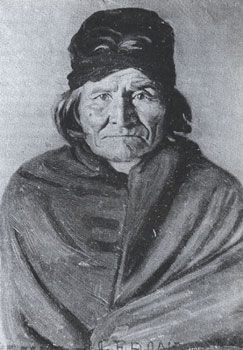 Geronimo. From a portrait by E.A. Burbank.

In 1894 Geronimo and 341 other Apache prisoners of war were brought to Fort Sill where they lived in villages on the range. Geronimo was granted permission to travel for a while with Pawnee Bill's Wild West Show and he visited President Theodore Roosevelt before dying here of pneumonia in 1909. The rest of the Apaches remained on Fort Sill until 1913 and they were taught by Lt. Hugh L. Scott to build houses, raise crops and herd cattle.

Scott also commanded troop L of the 7th Cavalry, a unit comprised entirely of Indians and considered one of the best in the west. Indian scout I-See-O and other members of the troop are credited with helping tribes on the South Plains to Avert the Bloody Ghost Dance uprising of the 1890s in which many died on the North Plains.

The last Indian lands in Oklahoma opened for settlement in 1901 and 29,000 homesteaders registered at Fort Sill during July for the land lottery. On August 6 the town of Lawton sprang up and quickly grew to become the third largest city in Oklahoma.

With the disappearance of the frontier, the mission of Fort Sill gradually changed from cavalry to field artillery. The first artillery battery arrived at Fort Sill in 1902 and the last cavalry regiment departed in May 1907.

The School of Fire for the Field Artillery was founded at Fort Sill in 1911 and continues to operate today as the world renowned U.S. Army Field Artillery School. At various times, Fort Sill has also served as home to the Infantry school of Musketry, the School for Aerial Observers, the Air Service Flying School, and the Army Aviation School.

Today as the U.S. Army Field Artillery Center, Fort Sill remains the only active Army installation of all the forts on the South Plains built during the Indian wars. It serves as a national historic landmark and home of the Field Artillery for the free world.