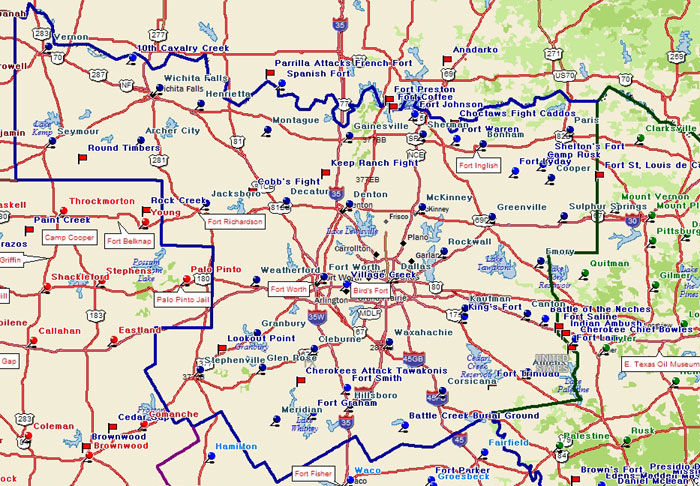 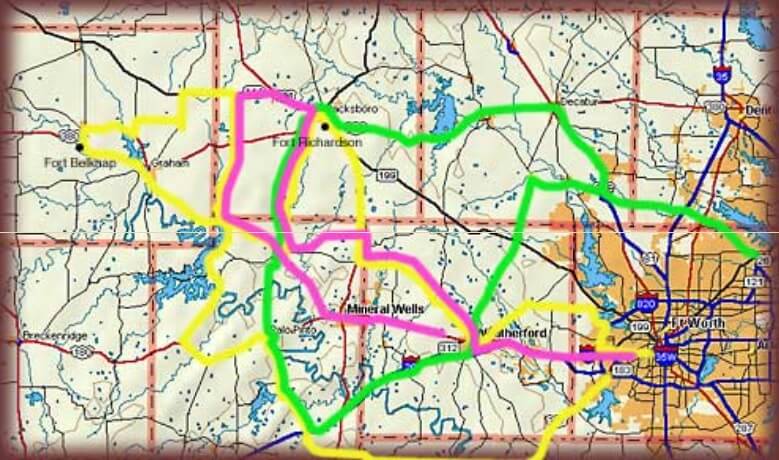 The areas on the map cover battles and massacres for the counties of Jack, Palo Pinto, Parker, Tarrant, Wise and Young. 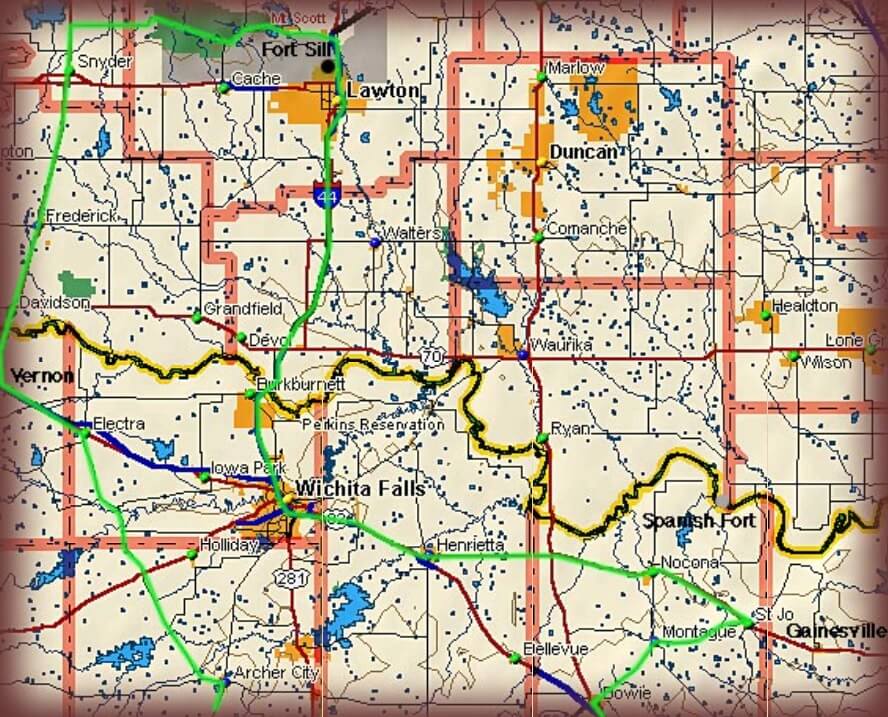 The areas on the map cover battles and massacres in the frontier settlements of Archer, Baylor, Clay, Cooke, Montague, Wichita and Wilbarger counties and also North of the Red River into Fort Sill and the Medicine Mountains.

A drive to Fort Sill offers an opportunity to pass through Archer City, north of Olney. Larry McMurtry owns the "Booked Up," a treasure trove of hard to find books on the West. There have been some interesting renovations to buildings around the square, including his "Last Picture Show." Wichita Falls has a good selection of lodging and restaurants as well as its own waterfalls. The famous ribs at Bar L barbeque drive-in, the red beers down the street at The Deuce (Pioneer Two Drive In) and red tacos at Casa Manana shouldn't be missed.

Archer County has two of the war's most important battle sites. The Battle of the Little Wichita, which began near Henrietta and continued to a point six to nine miles northeast of Archer City, and the Battle of Stone Houses, the worst defeat in Texas Rangers' history, which occurred further south between SH-16 and SH-79.

A good way to approach Fort Sill is from the west by driving north on Hwy. 183 through Frederick, Oklahoma and turning east at SH-49. Don't miss the drive to the top of Mount Scott while you are in the vicinity. The fort's original buildings, museum and displays are on a level of excellence with Fort Concho, which many consider the crown jewel of Texas forts.

If you intend to travel further north, recommended stops would include the Cowboy Hall of Fame in Oklahoma City, Fort Supply, just north of the Antelope Hills Battle, the Cavalry Museum at Fort Leavenworth and the Little Bighorn Battle National Monument. Lawton has a good selection of overnight accommodations and restaurants, handy if you want to start fresh in the morning and drive east to Rush Springs, the site of Van Dorn and Sul Ross' bloody fight with Buffalo Hump's Comanches in 1858. On your return, there is a good family style restaurant in Bowie and an extensively restored old-downtown district which hosts an interesting variety of craft, gift and antique shops.

A beautiful side trip to the site of the Old Spanish Fort on the Red River passes through many Indian battle locations as noted on the Montague County map.