Southeast to Jacksboro on Hwy. 281

In 1866, a small detachment of the Sixth Cavalry, led by Samuel H. "Paddy" Starr, marched into Jacksboro, established a post and began preparations to build a new fort to the north at Buffalo Springs, just across the Clay County line. The appearance of a large Comanche war party caused the army to relocate its building efforts back to the south in Jacksboro.

The Sixth Cavalry and several infantry companies posted at Fort Richardson were woefully ineffective at pursuing raiding warriors. The army not only lacked speed but was forbidden by treaty from crossing the Red River. In fact, the forces they did occasionally manage to catch were usually much better prepared than anticipated. McClellan's defeat at the Battle of the Little Wichita is often credited to superior generalship on the part of Kiowa Chief Kicking Bird. 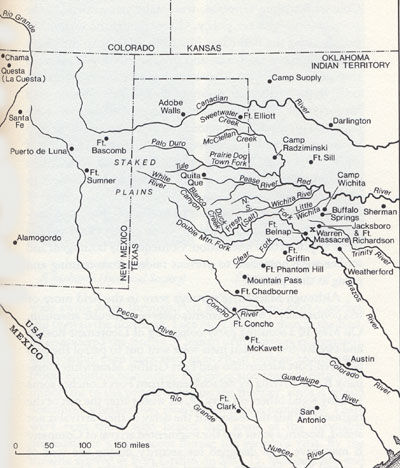 This map is from the book, Bad Hand, by Charles M. Robinson, III

Eventually the army built its new line of forts including Concho, Griffin, Richardson and Sill in Indian Territory, providing a sense of security that lured settlers back onto the frontier. Still, hundreds, if not thousands, of Comanches and Kiowas occasionally swept through the settlements.