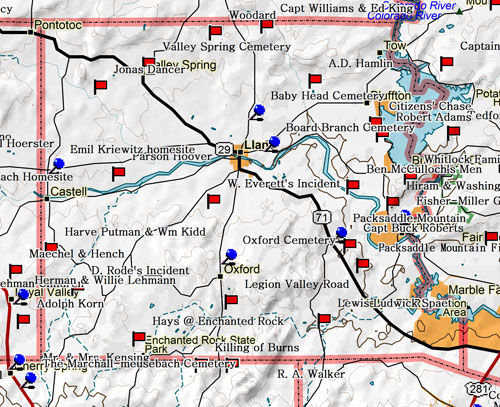 Marker Title: Baby Head Cemetery
City: Llano
Year Marker Erected: 1991
Marker Location: from Llano take SH 16 north approximately 9 miles to ROW.
Marker Text: According to local oral tradition, the name "Babyhead" was given to the mountain in this area in the 1850s, when a small child was killed by Indians and its remains left on the mountain. A local creek also carried the name, and a pioneer community founded in the 1870s became known as Baby Head. the oldest documented grave here is that of another child, Jodie May McKneely, who died on New Year's Day 1884. The cemetery is the last physical reminder of the Baby Head community, which once boasted numerous homes, farms, and businesses. More

Marker Title: Board Branch Cemetery
City: Llano
Year Marker Erected: 2000
Marker Location: 1 mile east of Llano on SH 29, then 5.8 miles north on CR 2241, then 0.9 miles west on CR 216.
Marker Text: This graveyard developed as a public burial ground for the Lone Grove community and surrounding area on the property of W.A. and Sallie Templeton. According to oral history, the earliest grave on this site may be that of William Kinderly, reportedly killed by Indians in 1864. The earliest documented grave is that of Susan Reed (d. 1886), the wife of John S. Reed. There are more than eighty graves dating from 1900 or before. The cemetery is called Board Branch for a mill operation once located on nearby Board Branch Creek. Among the graves of interest on this site are those of Confederate veterans such as Dr. Cyrus Reeves, an Army surgeon from Alabama, and eight others. Veterans of World War I, World War II, and other wars and conflicts are interred here, as well. (2000)

Marker Title: Homesite of Emil Kriewitz
City: Castell
Year Marker Erected: 1993
Marker Location: from Castell take SH 29 north approx. 3 miles to CR 405, then north on CR 405 1.5 miles
Marker Text: Arriving on the Texas coast from Potsdam, Germany, at the onset of the Mexican war in 1846, Emil Kriewitz began his Texas exploits by serving in the U.S. Army. He later was engaged by the Adelsverein to assist German settlement along the Llano River, an area then occupied by the Comanche Indians. At great personal risk, Emil lived with the Indians as a gesture of good will. In 1857 he married Amalia Markwort. They built their home and a small Sunday house on this site about 1867. He served as justice of the peace and postmaster before his death in 1902.

Marker Title: Oxford Cemetery
City: Llano
Year Marker Erected: 1985
Marker Location: from Llano take SH 16 south approx. 10 miles.
Marker Text: The Oxford community was founded in 1880 when Confederate veteran A.J. Johnson came to Llano County and laid out the townsite. In 1881, a burial ground was established near this site for the use of the families of Oxford. Burials date from 1883, although some of the graves that were moved from a neighboring cemetery bear earlier death dates. Among those interred there are the town's founder, A.J. Johnson (1832-1924), who captained the Packsaddle Mountain fight, an 1873 battle that drove raiding Indians out of Llano County.

We received the following information from a visitor of our site: The text on your website of Oxford Cemetery historical marker has some incorrect information. The Packsaddle Mountain fight was actually captained by James Ragsdale Moss. The actual marker in Oxford states this correctly. Sincerely, Wes Moss

Dear Mr. Moss, after receiving your e-mail, I did some research and you are correct. The Texas Historical Commission (where we gathered this information) has it incorrect on this marker but correct on the Packsaddle Mountain marker. (We will leave this as it's how the marker reads but will leave this note for other visitors.) Thanks for bringing this to our attention. Lea Ann Rector ~ Fort Tours

Marker Title: Valley Spring Cemetery
Address: CR 409, N. off SH 71
City: Valley Spring
Year Marker Erected: 1996
Marker Location: CR 409, 0.2 miles north of SH 71, Valley Spring.
Marker Text: This hilltop cemetery has served the local community since 1867 when Martha Epperson Eaker and Hattie Phillips, daughters of pioneer settlers in the area, were buried here. Burials continued, and in 1877 the Epperson family donated land for the "benefit and convenience of San Fernando Valley." Cemetery trustees acquired another acre in 1889, the deed referring to the "old graveyard west of the Valley Springs." Renowned pioneer physician Dr. W.Y. Fowler (1860-1935), who began his 46-year Llano County practice at Valley Spring in 1889, acquired the surrounding ranch in 1897 and provided additional land for the cemetery. More than 100 graves in this cemetery are marked only with a rock or unlettered stone; many are believed to be those of young children. Forty headstones record a birthdate prior to Texas statehood in 1846. Veterans of the Civil War, World War I, and World War II also are buried here. Cemetery maintenance, dependent on volunteers, resumed with the formal organization of the Valley Spring Cemetery Association in 1994. Improvements include water piped to the site, and many trees and plants added for beautification. The "old graveyard" continues to serve the families of Valley Spring. (1996)

During 1860 Woodard and a few others, out scouting, saw a lone Indian in the distance. Woodard fired and broke the Indian's neck. No other savages were seen. This occurred a few miles south of Cherokee in Llano County.

Ref.: R. Ralb, who lived north of Cherokee at the time.

During 1865, a Mexican was herding sheep for D. Rode in Llano County, about nine miles northeast of Cherry Springs. He was alone. The Indians murdered Rode's Mexican and he was found the next day by Harve Putman.

Note: Author personally interviewed: Peter Crenwelge, who lived in this section of the state at the time.