During 1868, among the very few families who lived in Legion Valley about sixteen miles south of Llano, were John F. Friend, Babe and Boy Johnson and their families. At the time of this particular raid, the Johnson brothers had started to Austin for supplies. John F. Friend was also away. So the women and children, during the morning of February 6, 1868, were congregated at the home of one of the Johnson brothers and the following people were present: Mrs. Friend and her stepson, Temple Friend, Miss Townsend, about sixteen years of age, and a relative of Mr. and Mrs. Friend, Mrs. Babe Johnson and her baby, Mrs. Boy Johnson and her baby, and little Malinda Caudull, a girl not yet in her teens.

During the fatal morning several savages were seen near the residence, unhobbling horses. And the splendid women and children made the very grave mistake of making a run for the house and then hurriedly returning. In this way, they paraded themselves in the open and disclosed to the Indians, no men were present. In a short time, the savages were attempting to break into the door. When they did, Mrs. Friend attempted to shoot but the wild demons, who were perhaps from the government reservation, wrenched the gun from her hands. The Indians then attempted to discharge a rifle, but the brave Mrs. Friend took a chair and knocked the gun out of the Indian's hands. She then knocked the Indian down with a smoothing iron. But she was shot through the breast with an arrow, which caused her to fall to the floor. Mrs. Friend was scalped, but the Indians only removed a small portion of her hair from the top of her head.

All others were made prisoners and poor Mrs. Friend left alone for dead. She was also badly cut across one hand and wounded in the arm. When the several Indians started away with their prisoners, one fiendish savage started back to make sure that Mrs. Friend was dead. She saw him coming so Mrs. Friend fixed herself in the same position in which she lay when the Indians left a few seconds before. When the Indian reached her, he pushed the arrow up and down in Mrs. Friend's breast several times, but the brave frontier woman did not flinch, so the savage went away. When the white captives had been carried about four miles to the southeast, the Indians killed Mrs. Boy Johnson's baby. A few miles farther on, the savages murdered Mrs. Babe Johnson's baby. The two Mrs. Johnsons, Miss Townsend and Temple Friend, who was about eleven years of age, were then carried into the cedar breaks to the southeast. No one knows just what these citizens endured. Here the Indians camped for the night with their prisoners. The next morning, when the red men were ready to resume their journey, one of the Mrs. Johnsons refused to go, or was unable, we know not which, so she was murdered and scalped. The other Mrs. Johnson was carried about one mile farther toward the southeast where she, too, was murdered. The savages, with their remaining prisoners, again resumed their journey. When they had gone about five miles farther, through the rough and rugged hills of that section, they murdered Miss Townsend, an innocent frontier girl about sixteen years of age.

The Indians now decided that it was time to take their remaining prisoners to Oklahoma and Kansas. Malinda Caudull, who was about ten years of age, was gone about one year, and Temple Friend remained with the Indians much longer. When he returned, twelve or fifteen years later, he was completely Indianized. He would take his bow and arrow and kill the ducks around the house and, needless to say, his acts and conduct for some time was very much like that of an Indian.

Thrall's Pictorial History of Texas contains a report of this disastrous raid. From this report, which was made February 11, 1868, just five days after the tragedy occurred, we take the following quotation.

"After Mrs. Friend recovered slightly, she started to the Widow Johnson's house, distant one and half miles, where a Mr. Bradford and family were staying. Mr. Bradford pulled the arrow out of her breast, placed cloth over her head and then fled to the woods, leaving her alone sitting before the fire, in which condition she remained until next morning. The attack was made before sundown. Twenty-four hours passed before the physician at this place was called; at the same time word was received here of the affair. Every man that could possibly go, started immediately a part going to the scene of the late fatal occurrence. Arriving in the night, we had to wait until morning to see the trail, which was thirty-six hours after the occurrence."

A heavy snow had fallen since the twelve or fifteen savages had committed their horrible crimes. So it was almost impossible for the citizens to follow the trail through the thick timber, and rough and rugged country. The bodies of those murdered were all found. Mrs. John F. Friend finally recovered and lived for many years.

Note: Author personally interviewed Ike B. Maxwell, W.H. Roberts, Capt. Van W. Roberts and others who lived in Llano and adjoining counties at the time.

Indian Depredations in Texas, by J.W. Wilbarger, provides a second version of this story: 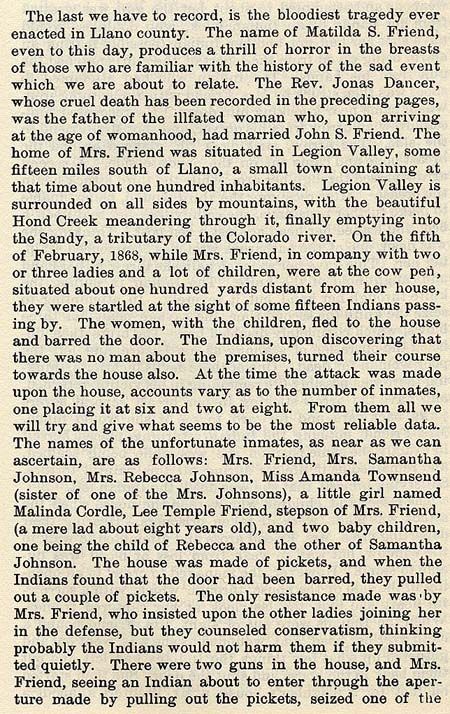 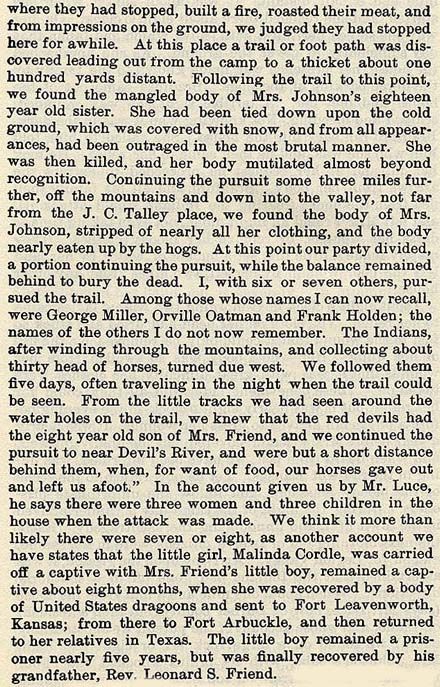