Jonas Dancer, a frontier preacher, numbered among the first settlers of Llano County. During May of 1860,some of the local citizens agreed to meet at a certain point for the purpose of blazing the ground to build a new church. Parson Dancer, traveling alone, left his home early but was massacred by Indians before reaching his destination.

Note: The author personally interviewed Ike Maxwell, who lived in Llano County at the time. Also interviewed others. 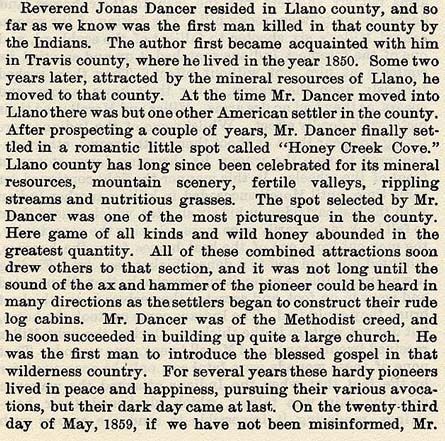 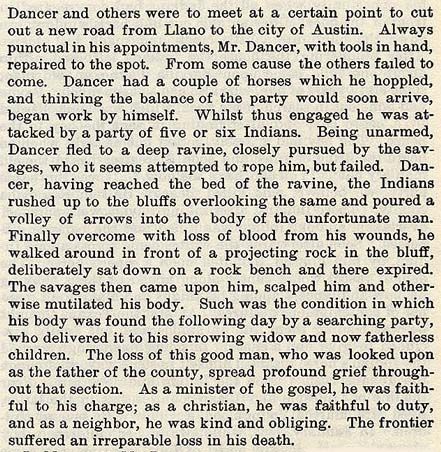 We received the following information from a visitor of our site:

The map for battle sites in Llano County has the death of Jonas Dancer in the wrong area of the county.  He was killed near his home on Honey Creek, which is in the vicinity of Pack Saddle Mountain, where he had left to meet others about building a road.  His grave is located west of his home, and although on private land, I know several people who have seen and photographed the marked grave. This would be WEST of Hwy. 71, as Pack Saddle is east of that same highway.

Dancer's home place still has remnants of a rock fence and well, but the boards that remained several years ago were sold and removed for use in a home elsewhere. His home is not far from the Honey Creek Cemetery, very near a famous swimming hole on Honey Creek known as Blue Hole. Although the road to Blue Hole leads only to private property, the beautiful oasis with rocks, foliage, and falling water can be viewed easily from the road. The road is just west of the Honey Creek Cemetery, taking the road that forks to the right (or north) not far past the home of Wilson Roberts, a direct descendant of early Llano Co. pioneer Charles C. Roberts.

I am an appointee of the Llano County Historical Commission