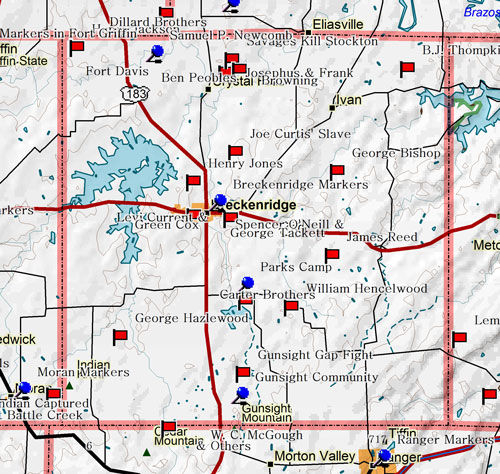 Marker Title: Caddo
Address: US 180 at FM 717
City: Caddo
County: Stephens
Year Marker Erected: 2002
Marker Location: NW corner of US 180 and FM 717
Marker Text: Caddo The 1860 census reported fewer than 200 residents in Stephens County. That year, Joe Schoolcraft settled on Caddo Creek, 15 miles south of a Caddo Indian village. He built his home on the north bank of Caddo Creek at Elm Creek. The town grew during the next decade, and in 1876, local ranchers began recording their brands at the courthouse. Early settlers included Jere Hart, C.J. Johnson, A.W. Corbett, Tom Thompson, W.B. Richardson, William Copeland, John Robinson and Josephus Knott, as well as the Graceys, Swensons, McMeens, Lees and Winstons. Perry K. Taylor opened a store in 1875. Shortly thereafter, R.Q. Lee and the Butlers opened "the Big Red Store," which became Sandidge, Lee & Co. in 1906. The Caddo post office opened in 1877. In 1883, the town hired Dora Mandy as the first schoolteacher. A two-story structure was built in 1890 and was used for school, church and Masonic lodge meetings; it burned in 1910, and residents then built a red brick and rock schoolhouse on Caddo Creek. The first physician came in 1886, and the town's early doctors included a woman named Dr. Evans. Local churches organized in the 1890s; the Baptist congregation built its sanctuary in 1894. Early settler Tom Lay hauled water to local residents, who also had access to telephone service in 1898. Cattle, horses, sheep and cotton were the mainstay of the town until 1916, when the first oil well came in. In 1919, Caddo led the state in oil production. The boom, which attracted thousands of new residents and numerous businesses, lasted until the early 1920s. By World War II, the population had declined. The last class of maroon and white Caddo Cougars graduated in 1945; the town consolidated its school with Breckenridge. Highway construction bypassed the town in the 1950s, and Caddo's population continued to decrease. Fewer than 50 people lived in the town in 2000, most relying on agriculture and oil. (2002)

Marker Title: Camp Breckenridge, C.S.A.
Address: US 180 at Courthouse
City: Breckenridge
Year Marker Erected: 1963
Marker Location: SW corner Courthouse Square, US 180, Breckenridge.
Marker Text: Established near this site 1862. Part Confederate frontier defense line from Red River to Rio Grande. Occupied by company of Texas Frontier Regiment. Posts were a day's horseback ride apart and area patrolled regularly. Duties included curbing Indian raids, rounding up draft evaders and renegades. Confederates were poorly fed, clothed and lacked horses, ammunition. They shared few of the glories of the war, but at the cost of the lives of not a few of them, these men gave a measure of protection to a vast frontier area. A memorial to Texans who served the Confederacy; Erected by the State of Texas 1963

Marker Title: Gunsight Community
Address: Off US 183 on CR 157 S of Breckenridge
City: Breckenridge
Year Marker Erected: 1995
Marker Location: From Breckenridge take US 183 south about 15 miles; take CR 157 east about 2 miles to marker in Gunsight Community.
Marker Text: Records indicate that Gunsight exited on a wagon road from Fort Griffin to Stephenville in 1858. Settlement of the town, however, did not occur until the 1870s. The first recorded burial here was that of Lewis McCleskey is 1877. Gunsight developed as a stage stop and by 1880 contained a post office, school, two churches, gristmill, general store, and a cotton gin. The local economy, sustained by cotton farming and ranching, was boosted by an area oil boom in the 1920s. The town began a steady decline after World War II and today consists of a few houses, a few buildings, and this cemetery.

Marker Title: Dr. Peter Gunsolus
Address: Walker St near Gunsolus Creek
City: Breckenridge
Year Marker Erected: 1989
Marker Location: North of Walker Street (US 180) in city park near the bank of Gunsolus Creek, Breckenridge.
Marker Text: (March 18, 1801-May 23, 1886) A native of Chicago, Dr. Peter Gunsolus came to this area in the 1850s. He lived and practiced medicine in Shackelford, Parker, and Stephens Counties. Gunsolus eventually settled here on Duck Creek, which was later renamed in his honor, and was a valued member of the community. Although some accounts state he was the father of 53 children from his seven marriages, many of those may have been step-children. Gunsolus Creek has played an important role in Breckenridge history as the site of social, religious, and civic activities.

Marker Title: Samuel P. Newcomb
Address: Off US 183 on CR 285 via FM 1481
City: Breckenridge
Year Marker Erected: 1996
Marker Location: from Breckenridge: 10.4 miles northwest on US 183; 1.7 miles east on FM 1481; 2.5 miles north on CR 285.
Marker Text: Born in Connecticut in 1839, Samuel P. Newcomb made his way alone to Texas at age 17, arriving in 1857. A schoolteacher, he settled at Fort Davis on the clear fork of the Brazos River in Buchanan county. Newcomb held several public offices. In 1860 he was elected county clerk of Buchanan county (renamed Stephens county in 1861.) He became a surveyor when the commissioners court assigned him the task of surveying the boundaries of Stephens county. In 1861 Newcomb functioned as Justice of the Peace, and was appointed collector of the confederate war tax for eleven counties. He served in a Texas state troops ranger unit during the Civil War. His writings have proved an important primary source for historians and archeologists. As a diarist, Newcomb chronicled the daily life of the pioneers, and carefully described the physical appearance of Fort Davis. He also told of droves of buffalo nearby, what young people did for entertainment, and the treatment for the sick and dying. He married Susan Reynolds, who also became a diarist. Her writings reflect the conditions of the county, and the isolation of the settlers. Newcomb died at age 31 in 1870, and is buried here beside his first child, an infant son. (1996)

Marker Title: Parks Camp
Address: Off US 183 on FM 576
City: Breckenridge
Year Marker Erected: 1990
Marker Location: From Breckenridge take US 183 south 6 miles to FM 576; take FM 576 east about 2 miles to marker.
Marker Text: Founded in 1918 and named for rancher J.W. Parks, on whose land it was located, Parks Camp was a company town built for employees of the Texas Company (Texaco). The discovery of oil on Parks land caused an economic boom in the area, and the Parks Camp at its height was home to about 15,000 people. By the 1920s the camp's facilities included a school, bank, post office, stores, community hall, doctors, and rows of individual and barracks-type housing. The town began to decline in the early 1940s and was completely abandoned by the end of World War II.

Marker Title: Picketville (Family Fort)
Address: US 183 N of Breckenridge about 1 mile
City: Breckenridge
Year Marker Erected: 1975
Marker Location: From Breckenridge, take US 183 north about 1 mile to marker.
Marker Text: One of Stephens County's first white settlements, Picketville was founded before the Civil War (1861-65) on Gunsolus Creek. Without military defense during the war, families "forted up" here for protection against hostile Indian attacks. The name probably came from picket construction in which tree limbs were placed on end and chinked with mud. Picketville served as the county seat until Breckenridge was settled in 1876. Then the town began to decline, leaving only a cemetery. After many graves were accidentally destroyed, Boy Scout troops restored and fenced the site.

Marker Title: Walter Prescott Webb's Formative Years
Address: US 180, on Courthouse Lawn
City: Breckenridge
Year Marker Erected: 1985
Marker Location: SE corner courthouse square, US 180, Breckenridge.
Marker Text: Noted historian Walter Prescott Webb (1888-1963) came with his family to Stephens County at the age of four. Over the next seventeen years, Webb received an education in frontier left that formed the basis of his intellectual development and his theories on the role of the Great Plains in American history. Webb's father, Casner, was a rural schoolteacher and farmer. As he moved to different teaching assignments, the family moved with him. W.P. Webb thus was exposed to the physical geographical variety within the county that was so important to his western thesis. His neighbors were prime sources of frontier lore. Although Webb's public school experiences were infrequent, it was during these formative years in Stephens County that he developed his love of books and his desire to attend college. Also during this time, Webb was contacted by William Hinds of New York, who was to become his benefactor and a great source of encouragement for the young scholar. In 1906 Walter P. Webb received his teaching certificate and spent the next three years as a rural educator. In 1909, at the age of 21, Webb left his home in Stephens County to pursue his college education at the University of Texas in Austin.

B.J. Thompkins and Others Fight in Stephens County

During 1873, B. J. Thompkins, Geo. Thompkins, Ryle Taylor, and Josh West, who lived on Veale's Creek in Stephens County, about one mile from the mouth, were traveling along in a wagon about two miles east of their home, when seven Indians were discovered some distance in the rear. Since these Indians were approaching the citizens from behind, when the wagon passed around a large rock, B. J. Thompkins and Ryle Taylor, dropped behind the rock, and let the wagon proceed down the road. In a short time, the seven Indians came along, and when Thompkins and Taylor fired, the Indians fled like scared wolves, and apparently at least one of their number was wounded.

About 1871, Henry Jones who was preparing to start to school at old Picketville the following Monday, went out to see about a pony he had staked about one mile west of the present town of Breckenridge. It was about Wednesday, and Jones was alone. The Indians came up and began shooting and a Mr. Evans, gathering cattle a short distance, away, could hear the firing. He ordered his cowhands to go in that direction for fear somebody was in distress. When they refused to go, however, each of them were discharged. When Jones was reached, he was already dead.