Mike Christeson has been gracious enough to send us the following information and invaluable pictures. Thanks again to Mike and his family.

Dear Rick,
Your site is great. I am writing about Lish Christesson. I have a lot of information about the Christeson family in MO, before they came to Texas. The spelling was changed as a result of a family dispute over slavery. I would like to contact the person from Breckenbridge who posted the message on your board. Also interested in anything else which you might have on the Christessons. One of Lish's daughters, Margaret, married Andrew Cameron McDonald and moved, after the Civil War, to the area of Amarillo Texas. I have obits and some pictures of these true pioneers of West Texas and will be glad to share.  You may contact me at [email protected] .
Thank you...Mike Christeson

Addendum: I was assuming that Lish Christesson was the same person as Elisha Elzie Christeson, born  7-3-1832, in Pulaski Co. MO, who was Margaret's father. Lish must be her brother, Elisha Levi Christesson, born 4-15-1857, in Denton, Co. Texas. Please change my posting to show Elisha Elzie and not Lish, as her father. Thanks, Mike 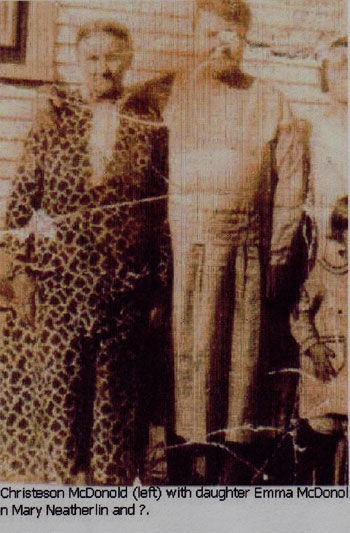 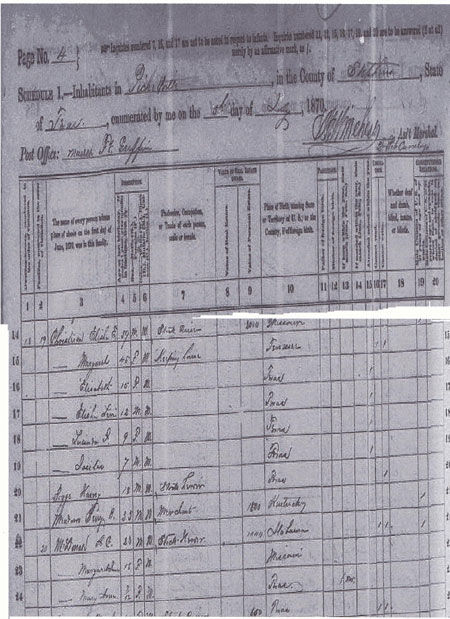 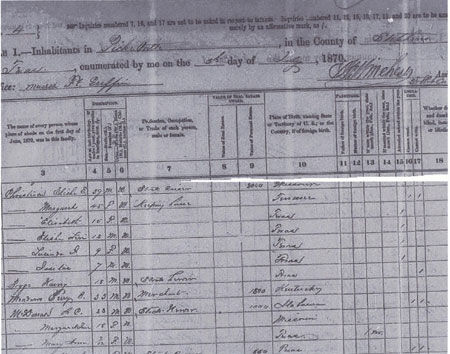 The following stories are from the book, The West Texas Frontier, by Joseph Carroll McConnell.

Levi Current had moved from Picketville to old Mugginsville, and had returned for his chickens, etc. Early one morning during 1864, Levi Current left Picketville with an ox-wagon full of chickens and other things and was followed by Green Cox in another wagon. When the two were about one and a half miles west of the present city of Breckenridge, they were surrounded by about ten or twelve Indians, who in truly Indian fashion, rode around the citizens in a circle, and continued their firing. Green Cox was somewhat excited, but Levi Current told him to be calm, take deadly aim and shoot an Indian. Cox complied with the request and when he fired, an Indian fell. Levi Current also wounded a savage. The Indians saw they could not frighten the citizens, had a real fight on hand, and rode away with their wounded. About four days after this fight, G.E. Christesson found where an Indian had been buried about three miles from where the fight occurred.

Note: Author interviewed: Lish Christesson; and J.H. Schoolcraft, who lived nearby at the time.

During 1872, Ben Peobles was working for Gad Miller, who lived on the Clear Fork, close to the present town of Chrystal Falls, in Stephens County. He was out hunting horses, early in the morning, about two miles south of the Miller Ranch, alone on horseback, and armed with a six-shooting rifle. When charged by the Indians, Peobles ran toward the house, and no doubt felt sure he could escape, for Ben was riding a race horse. When this pioneer citizen was about three hundred yards from his destination, however, he received a mortal wound, and died almost instantly. Peobles was scalped and pinned to the ground with arrows. His yelling aroused others at the house. So Lish Christesson, J.H. and E.M. Current, G.W. Emberlin, and Bradshaw went to his rescue, but he was already dead. These citizens were later joined by Dick McCarty, and perhaps others, who followed and fought the retreating Indians until about two o'clock in the evening. About this time, Jeff Davis, Flake Barber, John McConnell and several others, joined the handful of citizens. It seems that after that hour, the Indians were never overtaken. However, the savages robbed a house on King's Creek, about sundown, and the citizens rode up just as the Indians were leaving.

Note: Author interviewed: Lish Christesson, mentioned above; and others.