Late in February of 1868, Geo. Hazlewood and others had a roundup and placed a large number of calves in the corrals on Sandy Creek and on the James Walker Ranch. Geo. Hazlewood, at the time, was living on Battle Creek, a few miles away. But in accordance with their usual custom, the cowmen camped near the cattle. Late in the evening of February 29th, Geo. Hazlewood hobbled his horse at camp, and turned them out to graze.

The next morning, which was of course, the first day of March 1868, exactly five years after Will M. Peters was killed, Geo. Hazlewood instructed the men to continue branding the calves in the corrals, and he would go out and bring in the horses. It was an extremely windy day, the air was full of sand, and a strong March wind blowing. Jim Carter, M.L. Johnson, John, and Tom Hazlewood, Wm. Cain, a son-in-law of Geo. Hazlewood, and possible two or three others were left at the pens branding calves, while Geo Hazlewood went to hunt the horses. In a short time, he found a few ponies, brought them to camp, and returned to find the others. In his reminiscences, published in the Trail Drivers of Texas, J.T. Hazlewood, a son of George Hazlewood, among other things reported as follows:

"During his absence, a man coming from another ranch observed a band of Indians and he hurried to the camp to give the alarm. The men in camp saddled their horses and went to the point where the Indians were last seen. They rode up on a high elevation, looking down into a canyon, where they discovered the Indians, and the Indians discovering the men at the same time. There being a large party of the Indians and only a few white men, a running fight took place as the men started back to camp, the Indians shooting with bows and arrows, while the men used their guns and pistols.

After the Indians had retreated, search was made for my father and he was found about a mile and a half from the camp, lying in a branch, where he had been killed by the Indians. He had fought them single-handed for some time, and several pools of blood were found near the battleground. The Indians were in the canyon preparing to carry off the wounded, when the settlers camp upon them. After killing my father, they did not disturb him except to take his gun, pistol, horse, saddle and bridle. The men went back to the camp, procured a wagon and brought father's body to the ranch the next day."

George Hazlewood was armed with one of the first Spencer rifles that reached Stephens County, and with this weapon, did deadly work. But accounts differ as to the number of Indians that were wounded and killed. Most conservative reports, however, indicate that one or two Indians were killed and an equal number wounded.

Along about this particular period, a mysterious African, named Cato, who in a measure, made his home at Fort Concho, often disappeared, and would be gone for long periods of time. This African man was the husband of Indian Kate, who was also known as Comanche Kate, for her father was a Comanche Indian. Her mother was formerly a slave of Wm. Greenwood, who moved to old Fort Mason, a few years before the outbreak of the Civil War. It was generally believed that Cato, her husband, was at times, operating with the Indians. And when George Hazlewood was killed, according to reports, Cato was with the Indians and helped commit the murder.

From the little branch where Geo. Hazlewood was murdered, the Indians went westward, and for a time, stopped in sight of old Mugginsville. From there they started toward the northwest. 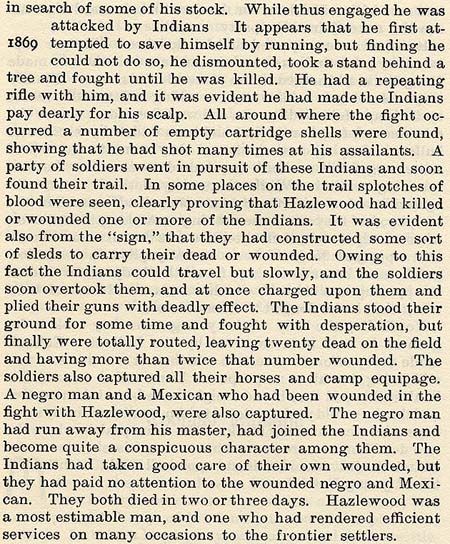 The troops, accompanied by their Tonkawa scouts and a party of stockmen, immediately pursued the ragged war party. The scouts had no trouble tracking the Comanches, who were burdened by three wounded warriors dragged on litters behind their horses. Between the forks of Paint Creek, about eight miles south of present-day Haskell, the Tonkawas discovered the enemy camp. The pursuit party spent a miserable night without fires or sleep, waiting anxiously to surprise the Comanches at first light.