Marker Title: Camp McMillan, C.S.A.; Texas Civil War Frontier Defense Address: US 190, at Courthouse
City: San Saba
Year Marker Erected: 1964
Marker Location: Courthouse grounds, Highway 190, San Saba.
Marker Text: Located 18 mi. West, 6 mi. North, this outpost guarded the Texas frontier during Civil War. One of a chain of outposts a day's horseback ride apart, from the Red River to the Rio Grande manned by the Texas Frontier Regiment. Regular patrols kept Indians in check and rounded up draft evaders. Food, clothing, horses and arms were always needed. They shared few of the glories of the war, but at the cost of the lives of not a few of them, these Confederates gave a measure of protection to a vast frontier area. (Back Side Camp McMillan): TEXAS CIVIL WAR FRONTIER DEFENSE: Texas made an all-out effort for the Confederacy after voting over 3 to 1 for secession. 90,000 troops noted for mobility and heroic daring, fought on every battlefront. An important source of supply and gateway to foreign trade thru Mexico, Texas was the storehouse of the South. Camp McMillan and other posts on this line were backed by patrols of State Rangers, organized militia, and citizen posses scouting from nearby "family forts." This was part of a 2000 mile frontier and coastline successfully defended by Texans. 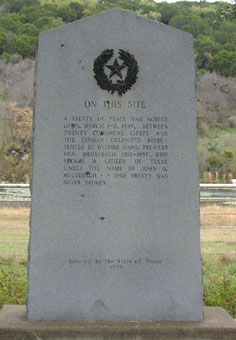 Marker Title: Comanche Indian Treaty
Address: FM 2732 off US 190 SW of San Saba
City: San Saba
Year Marker Erected: 1936
Marker Location: From San Saba, take 190 West about 3 mile, then go south on FM 2732 about 10 miles (marker is about .25 mile) north of New Hope Chapel and Cemetery.
Marker Text: On this site a treaty of peace was agreed upon, March 1-2, 1847, between twenty Comanche chiefs and the German colonists represented by Otheried Hans Freiherr Von Meusebach (1812-1897), who became a citizen of Texas under the name of John O. Meusebach...this treaty was never broken.

Marker Title: John Duncan's Fort
Address: US 190 & Hwy. 45 intersection
City: Richland Springs
Year Marker Erected: 1968
Marker Location: On US 190 at intersection of 190 and Highway 45, Richland Springs.
Marker Text: A private, or settler's fort, built 1858. Cabins of 4 families (30 people) formed a stockade for defense against Indians. Daily a hunting party would go out for meat; other men stood guard. Residents went home to farm in spring, but through 1865 "forted up" each fall.

Marker Title: Harkeyville
Address: US 190, W of San Saba
City: San Saba
Year Marker Erected: 1974
Marker Location: From San Saba, take Highway 190 west 2.5 miles, then follow county road north about .25 mile. Marker is on west side of road.
Marker Text: A site once famous for its horses and racetrack. Riley Harkey (1832-1920) and Israel Harkey (1835-1914) were Indian scouts in Texas in 1850-53. In 1855 they led their parents, Mathias and Catherine Harkey, to move here from Arkansas with other adult sons, daughters, in-laws and grandchildren. The families ranched, and Mathias Harkey ran a country store for many years. Riley Harkey brought to Texas a fine, fleet footed mare, who with her racing progeny drew crowds of enthusiasts to this site for half a century. Other sons and grandsons of Mathias Harkey also joined in the breeding, training, and racing of horses. Stores, blacksmith shop, and other businesses all faced east on a single street overlooking the flat with its racetrack and baseball diamond. There was no post office, but the village was so well known that mail addressed to Harkeyville promptly arrived here. On Nov. 26, 1873, George W. Barnett (1823-1885) gave land for the first school; the schoolhouse was used also for church services and public meetings. The racetrack closed in 1907; the cotton gin burned in 1920, and was not rebuilt; school consolidated in 1929 with San Saba. The last store closed in 1954. A community hall, built 1973, marks site of the town.

Marker Title: Indian Signaling Grounds
Address: US 190 E. of San Saba about 4.5 mi.
City: San Saba
Year Marker Erected: 1967
Marker Location: From San Saba, take 190 east about 4.5 miles.
Marker Text: Heights used from pre-settlement days to 1870s by Comanches and others to send messages over long distances. Smoke once rose from here (Five Mill Hill); Chapel Hill, 2 mi. south; and old community of Sloan in west San Saba County. Tribes wintered at main village near Sloan; burial ground is on Chapel Hill. An early settler recalls Indians peering through cracks in cabin at night while she, children, and friend put ashes on fire and hid. She believed Indians would not enter a dark house. Another time she heard livestock being taken. Many pioneers saw signals on nearby hills. Indians communicated by means of smoke, at times mirrors. Codes were used to confuse enemies. Messages sent news and could gather or disperse tribes. The Comanches had an excellent smoke signal system, also imitated animal cries. These often warned settlers to prepare for attack. In some areas, whites later pre-empted signal grounds for use against the Indians. Mirabeau B. Lamar visited this area in 1837; later, as president of Republic of Texas, he had a forceful Indian policy. On banks of San Saba in 1847, German Emigration Company bought peace from the Comanches for $3,000 worth of beads, trinkets; and in 1850 on Wallace Creek, about 15 mi. southwest, the U.S. signed an Indian treaty.

A little east at the junction of the Colorado, Captain Burleson led his rangers in a fight against the Cherokees on Christmas, 1839.

Marker Title: Lathum Cemetery
Address: Did Not Locate
City: Lathum
Marker Location: Did Not Locate
Marker Text: The burial site of four pioneer area settlers, this cemetery was first used for the interment of George Lathum (1859-63), the son of John (Jack) and Caroline (Couch) Lathum, who died as a result of a rattlesnake bite. Also buried here are Caroline's stepfather Chaney Couch, killed by Indians in 1864, Mother Isabella (Christian) Couch (d. 1887), and Grandmother Elizabeth Christian (d. 1868). Relatives of these pioneer settlers later started the nearby Deer Creek Cemetery and were responsible for the establishment of a school and chapel named in honor of Isabella Couch.

We received the following e-mail regarding the above historical marker.

There is a major mileage error in reporting where this camp ground is.

It should read 1.1 miles. The way it is written, you would end up in Cherokee, Texas, which is south of San Saba on Hwy 16. Matsler and Smelser are some of my relatives on my mother's side of the family. My great-grandmother, Delia Ray "Lamb" Bourke married a Rev. John Richard Smelser of San Saba. He was a circuit-riding Methodist preacher. She was 75 and he 85 when they married. Delia was sister to Bell Matsler, wife of Tom Mastler of High Valley. Delia Smelser lived to be 85, while Rev. Smelser lived to be 102. Tom Matsler lived to be 92, passing away from heart failure while he was taking a water break from plowing his field. Now that is the way to go. He was a wonderful godly person as was all these individuals. Rev. G.R. Diehl

Marker Title: John Robert Polk Ranch
Address: US 190 W of San Saba, did not locate
City: San Saba
Marker Location: From San Saba, take 190 west. Did not Locate.
Marker Text: Known as San Saba County property with history of longest continuous ownership by a single family. Texas settler Headley Polk, a kinsman of 1845-1849 United States President James K. Polk, bought from grantee Burke Trammel in 1849 a section of land a half-mile to the south of this marker. Headley's son, John Robert Polk (1853-1946), grew up in Lockhart and on the San Marcos River at the Mooney Mill, where he made fine furniture. In 1883, "Bob" and his wife Kate Word Polk moved to this property with their herd of cattle. Over the years they bought adjacent land until they had 2,000 acres with frontage of three and one-half miles on the San Saba River. The second tract of land in this county ever to be enclosed was fenced by Polk with the help of a man named Baker. Two schoolhouses were built at different times on this ranch, for the convenience of the Polk family and neighbors. In the early era, Polk trailed his Bar-P cattle to market; for years he belonged to the Texas Trail Drivers' Association. John Robert and Kate Polk were parents of a son Headley (who died at 17, in 1904) and five daughters: Annie (later Mrs. W.W. Holman), Eupha (Mrs. Louis J. Bryan), Ivor Mae, Katie (Mrs. J.A. Sloan), and Lex.

Marker Title: San Saba County
Address: US 190, E of San Saba
City: San Saba
Year Marker Erected: 1936
Marker Location: From San Saba, take 190 East .2 mile.
Marker Text: Formed from Bexar County; created February 1, 1856; organized May 3, 1856. The river traversing the region, the mission erected near by in 1757, and later the county and county seat were given the name of an early saint, whose name in Spanish is Saba.

During February of 1860, Henry and W.D.C. Wood were a short distance from their homes hunting horses. They lived about five miles east of the present town of Richland Spring. They became separated. W.D.C. Wood was charged by Indians and soon received a mortal wound. Henry Wood successfully made his escape.