Early in August of the above year, scouts of Capt. McCulloch reported fresh Indian signs and a fresh Indian trail west of their camp, which was on the north branch of the Llano. Capt. McCulloch and twenty-one men followed in immediate pursuit and when they reached the south bank of the San Saba, it became evident that the Indians were near. The Comanches' camp was soon discovered in a deep ravine. No doubt, these Indians felt secure so many miles from the settlements and permitted their horses to graze away for a considerable distance. 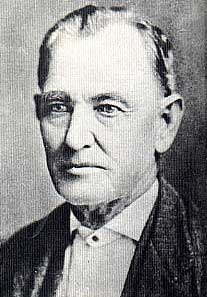 After learning the Indians were near the command cautiously proceeded toward their encampment. Capt. McCulloch and his men, at the critical moment, made a decisive charge and separated the horses from the Indians, who took refuge in a nearby ravine. The rangers crowded them as closely as possible and it was reported the female tribespeople fought with bows and arrows like they were men. The Indians were finally routed from their position and retreated down the branch until they found refuge in the brush below.

After the smoke of battle had cleared away, eight warriors lay dead on the ground. The rangers recovered their horses and camp equipment and it was evident the Indian raiders had been robbing the Mexicans on the Rio Grande. Two captured female tribespeople were also among the spoils and Capt. McCulloch gave them horses and necessary supplies and told them to convey the word to Katumpsy, chief of the Comanches, that if they would bring in such prisoners they had and report at Fort Martin Scott, their horses would be restored. In response, Katumpsy contended that he had been warring against the Mexicans only and that it was not right for the Texans to interfere. 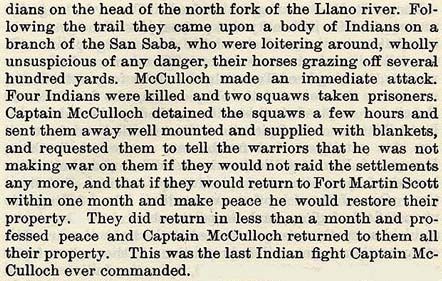