During November of 1858, John Burns was hauling supplies to Capt. John Williams' company of rangers, who were camped in Bowsers Bend on the Colorado in the northern part of San Saba County. The supplies were hauled in three wagons and about eight oxen were hitched to each vehicle. About ten rangers were sent to San Saba to escort John Burns and his men. During the night all camped near Richland Springs. The Duncan brothers, prior to that time, had had a ranch at this point, which was known as Fort Duncan. Beyond this point there were no roads, so James Brown and Will Cathey were detailed to select a suitable route for the wagons and find a suitable crossing of a branch for the party. The two were not a great distance ahead when twelve Indians suddenly charged and chased the rangers back to the wagon. The Indians seemed somewhat surprised, however, when they ran into others. At the request of John Burns, two of the rangers remained with the wagons. The others pursued the Indians and a running fight followed with the Indians in the lead. As many as four Indians were killed and wounded and a number of stolen horses and Indian provisions recovered. Jim Brown was in command and the other rangers were Will Cathey, Henry Farrar, N.A. Taylor, S.S. Gholson, John Meyers, Carter Williams, B.F. Gholson, Stephen Kemp and Riley Petit. This fight occurred in the northwestern part of San Saba County.

Note: The author conferred with B.F. Gholson who was in the fight.

During February of 1859, Lt. T. McMillan of Captain John William's company and about fourteen others were scouting for Indians to the west of the present town of Evant. Simultaneously Therman Ragsdall, was chased by Indians to the home of Mr. Asa Langford. Mr. Langford and J.W. Witcher in turn carried this news to the scouting rangers.

Lt. McMillan's horse had broken down, so he was riding a mule borrowed from Mr. John Riger.

"Don't" Elliot and Wilburn Damson were ordered to go first to Gillespie Point, and then to Henderson Point, to intercept the Indians, already being hotly pursued by Lt. McMillan and the main command. The officer and his mule were lost in the chase.

When the Indians were overtaken, the chief stopped to fight. But his warriors ran away. Bill Beene and Jim Fisk remained to fight the chief. Other rangers followed the fleeing savages. The chief was fired upon several times, but able to protect himself with a shield. About this moment, Lt. McMillan and his mule arrived. As he crossed a ravine, heavily grassed, his animal turned a complete somersault, and accidentally discharged McMillan's pistol; which resulted in killing the mule.

McMillan's position at this time was at right angles with the chief and the two rangers. This gave the lieutenant an opportunity to shoot behind the shield. As a consequence, he shot the chief twice. A female tribesperson then appeared on the scene to assist the wounded warrior. But she soon sustained a broken arm and rode away. Later during the battle this female tribesperson was shot from her horse. "Don't" Elliot and William Dawson were successful in turning the retreating warriors. But Dawson lost his horse and saddle. The Indians were chased about six miles farther.

They carried away four of their number, wounded or dead, and left behind the chief and female tribesperson.

When the rangers returned to headquarters, Mrs. Captain John Williams discovered a human scalp and other articles hidden in the chief's shield. The scalp was given to John Jackson, a son of Mr. and Mrs. Mose Jackson, murdered by the Indians during the preceding year.

The following rangers were in this fight: "Don't" Elliot, Wilburn Dawson, Toll Dawson, Bill Beene, Jim Fisk, Harve Denson, and about seven others.

Note: The author personally interviewed B.F. Gholson, who was a ranger in Capt. John William's company.

October 14, 1861, Capt. John Williams and his cowhands were gathering cattle for the Confederate army. While scouting in the northern part of Llano County near the Llano-San Saba County line and passing through Babyhead Gap, Capt. Williams became separated from his men. The Indians then came rushing off of the mountain and made a charge. Ned, David and John Truman successfully made their escape, but Ed King, riding a mule, was being killed. So Capt. John Williams rushed to his relief, but he too, was soon killed and scalped. Capt. Williams, at the time, lived near the present town of Cherokee. 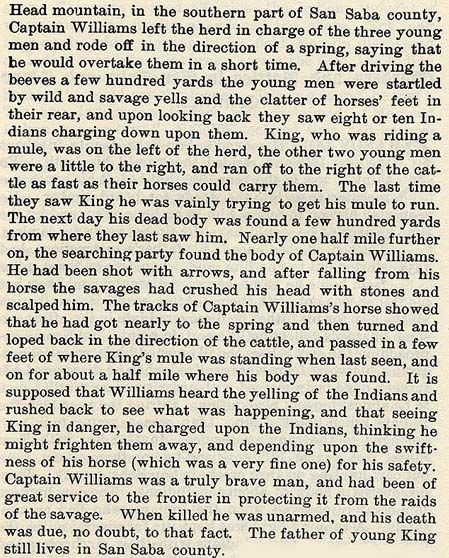