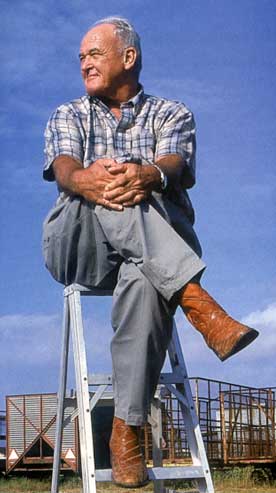 Bobby Morrow on his cotton farm near San Benito

Morrow, who was raised on his family's farm near San Benito, arrived on the campus of Abilene (Texas) Christian College in 1954. The Wildcats' track coach, Oliver Jackson, in effect told Morrow that if he wanted to attend a party school, go to Holy Cross; if he wanted to win footraces, come to Abilene. Jackson had a plan. His intent was to assemble a team of sprinters who could outrun the West Texas wind. If they could do that, then they could outrun the world. In Morrow, he found his main man.

"Bobby had a fluidity of motion like nothing I'd ever seen," says the 80-year-old Jackson, who lives in Abilene. "He could run a 220 with a root beer float on his head and never spill a drop. I made an adjustment to his start when Bobby was a freshman. After that, my only advice to him was to change his major from ag sciences to speech, because he'd be destined to make a bunch of them."

By Morrow's sophomore year, he had tied world records in the 100- and 200- meter dashes (10.2 and 20.6 seconds, respectively) and anchored Abilene Christian relay teams to another world mark in the 4 x 220. Still, track and field purists from the West Coast were skeptical of Morrow's skill and suspicious of the wind gauges used at meets in Texas. The San Benito Bullet? Sober up.

The doubt disappeared after the June 1956 U.S. Olympic Trials at the Los Angeles Coliseum where Morrow won the 100 and 200 meters. By then, everyone realized it made no difference whether the man in the next lane was from Baylor or Belgrade-he had no chance of outrunning Morrow. Morrow's only bona fide rival was Duke's Dave Sime, destiny's victim, who beat Morrow in the 100-yard dash at the Drake Relays in April 1956 but was injured at the trials.

"I was standing near the finish line for the 100-meter finals in Melbourne," says Bob Richards, who won the gold medal in the pole vault at the 1956 Games. "The track was terrible. Loose, like sawdust, and Bobby was kicking cinders 10 feet into the air behind him. On a modern surface, there is no doubt in my mind that Bobby would have run an eight-something 100 meters. He was the greatest sprinter I ever saw."

At slightly more than 6 feet, Morrow was tall for a sprinter, but his legs were thick. Stylistically Morrow was a symphonic convergence of many moving parts, his stride offering the illusion of a man floating an inch or so above the cinder fairway. "Oh, he looked so relaxed, so graceful, like when he was chasing rabbits back on the farm. That was Bobby's trademark," says Jo Ann Richey, Morrow's former wife.