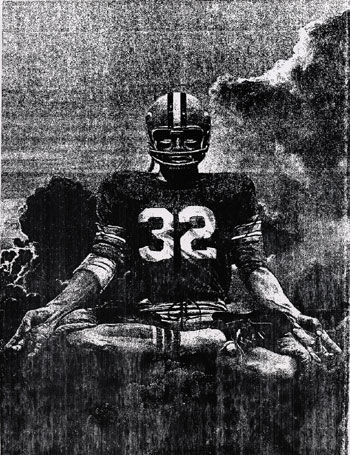 The following excerpt, coming out in September, 2006, is from the book Runnin' with the Big Dogs, by Mike Shropshire:

Throughout his football career, Looney was accused, in the media and in the minds of the sporting public that didn't know better, of squandering his immense sporting talents. He was a natural, all right. Looney could do double backflips on a trampoline like, say, Mary Lou Retton. He could dance like Gene Kelly and drive a golf ball like John Daly. He could truly do anything he damn well wanted to, a jock of all trades, but his critics never realized how passionately and relentlessly Looney had toiled in order to fashion himself into the machine that he was to become.

Nighttime was different, though, and Looney, even in his teens, felt completely at home and at ease in the garish glare of the Fort Worth neon. Cowtown was honky-tonk heaven, and Looney relished the setting. he could not stand the country music on the jukebox (one could not enter a Fort Worth saloon without hearing Floyd Cramer plink-plinking "Last Date" on the piano), but he was tolerant of any setting as long as the beer was cold and in ample supply. I was home from UT at midsemester break and got busted with Looney for drinking underage at a dive in West Vickery next to the Texas & Pacific Railroad yards where we all used to go shoot rats with .22s during our happy days as lads. They called the tavern The Pub. It was a brakemen's bar, and we were popped by a mean man who represented the Texas Liquor Control.

Joe Dan was back in there the very next night. "The only time I ever met Looney was in The Pub," recalls a man named Joe Longley, now an Austin lawyer. "I was wearing a white Izod golf shirt, the ones with the little alligators on them. Evidently, he didn't like Izod, so he picked up this plastic toothpick off the bar and flicked it at me, and, I'll swear to God, the thing stuck in the shirt like a miniature javelin, and a little bead of blood appeared next to the alligator. He threw his head back, laughed, and said, 'that's the way Joe Don Looney does it.'-"

I got to see another way that Joe Don "did it" in Fort Worth around New Year's. Now Looney was wearing a tux at a party that was thrown by the daughter of an eye surgeon, near the Rivercrest Country Club, playpen for the upper crust. An attendee at the soiree was Sid Bass, home on holiday from yale. Sid had something of a good thing going for him. He was one of the richest little bastards in the world. I knew Sid, having sat next to him in Spanish class in junior high school, before his family had shipped him off to prep school at Andover. Late in the evening, Sid Bass attempted to toss a piece of peppermint candy to another guest. He missed, and the candy hit Joe Don in that tree trunk of a neck that he had.

Looney's blood alcohol level was in the danger zone. He told Sid "to cut that shit out." He didn't know who Sid Bass was, and Sid, being a person who could buy downtown Houston with his pocket change and was certainly unused to being addressed in such a manner, reached into the candy jar and flipped another piece in Joe Don's direction. I knew what was coming next and actually stepped over a coffee table in time to intercept Looney and stave off the assault. "For Chrissake! Don't kill Sid!" I spun Looney around and directed him back toward the kitchen where the booze was being poured. Later, a shaken Sid Bass offered me thanks.

I include this happening only because that was my only meaningful contribution to the Texas-Oklahoma football series. Had Looney socked Sid Bass, he might not have actually killed him, but certainly would have inflicted life-threatening cranial damage. Had that occurred, the Bass family would have seen to it that Looney was sent away for about eighty years, and Bud Wilkinson would have been deprived of the opportunity to meet the most frustrating football player he would ever coach.

Looney-though it was hardly his intention-was gathering a citywide reputation as the most notorious saloon patron to hit Fort Worth since Doc Holliday. Perhaps the most notable of frequent Mount Looney eruptions took place in the parking lot of the 19th Hole, a dive on University Drive popular with TCU kids. Looney duked it out with a Horned Frogs basketball player, David Warnell. His teammate, six-foot-nine Stan Farr, who would be shot to death in the most celebrated murder case in Fort Worth history, was among the ringside audience and watched Looney punch out Warnell. Joe Don's first-round TKO earned his persona non grata status on the TCU campus and parts of the surrounding neighborhood.

Looney played golf at the Worth Hills muni course that abuts the college-is the same course immortalized as Goat Hills in various Dan Jenkins-authored projects. He stood admiring the flight of his tee shot on a Par 4 hold that ran along Stadium Drive-damn near drove the green-and watched as a little kid ran out of a house across the street, picked up Looney's golf ball, then ran back inside. A guy in the threesome fell over laughing and said, "That's a two-stroke penalty, Joe Don." Looney sprinted down the fairway, carrying his driver in his right hand, ran across the street, the spikes on his golf shoes making a klat-klat-klat noise on the pavement. He pounded on the front door and from within, a woman's voice commanded, "You get away from here before I call the police."

The Looney situation was that he was seeking a higher plain, cosmically that is, and Fort Worth could be a frustrating place to try to accomplish that. His journey to awareness began after he read Hermann Hesse's Siddhartha. Looney identified with the young prince. "Siddhartha-the strong, the beautiful, moving with his lithe-limbed walk...love stirred in the hearts of the young daughters of the brahmins with Siddhartha walked through the city streets with his radiant brow, his imperial grace, with his slender hips." Looney read that and said, "Yep, that's me, all right."

Of course, in the case of his literary model, it was, "Yes, everyone loved Siddhartha. He aroused joy in everyone, he was a delight to all." Well, that's where the Siddhartha-Joe Don Looney connection really jumps the track. Most people felt that it was only a matter of time before Joe Don got himself shot. If Joe Don had any competition for the rank of Fort Worth's premier ass kicker, it would have been Rudy Mauser, a former center on the Kansas Jayhawks football team. "So who do you think is the baddest of the bad, you or Rudy?" The question was posed to Looney, and he sighed, "I guess there's just one way to find out.

"Send Rudy over to beat the crap out of David Warnell, and then Warnell can tell us." Most everything Looney did, even at age eighteen, he accomplished with a rare kind of panache.

The challenge Looney then encountered was that he was primed and poised to conquer the kingdom of American athletics, but he lacked the proper stage setting to exploit his talents or from which to expand his arena from the barroom parking lot. Up to this point, Looney's best playing surface was asphalt. His one attempt at boxing encountered a jagged outcome. An experienced Golden Gloves heavyweight was making Looney look awkward in an outdoor ring at Rockwood Park. Finally, in the second round, Looney landed a punch. His opponent promptly swallowed his tongue and went into convulsions. Afterward, the man in charge of the event approached Looney and told him, "You damn near killed that boy!" 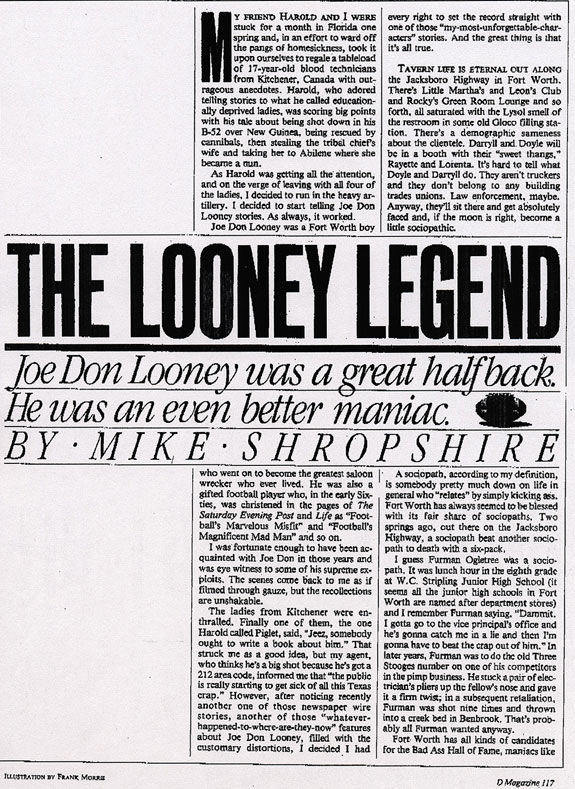 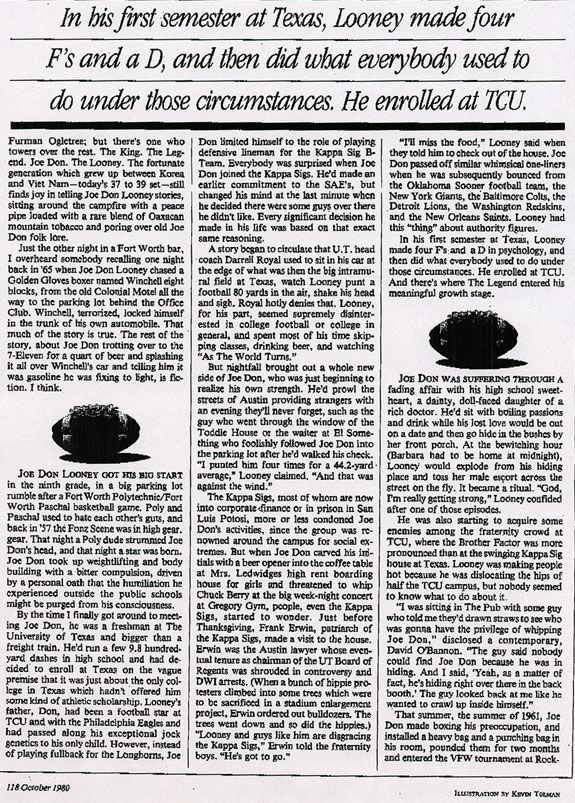 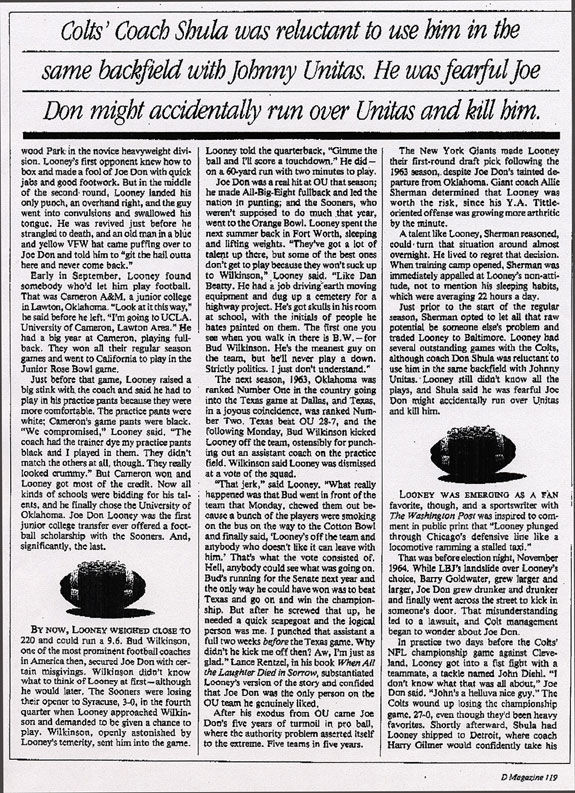 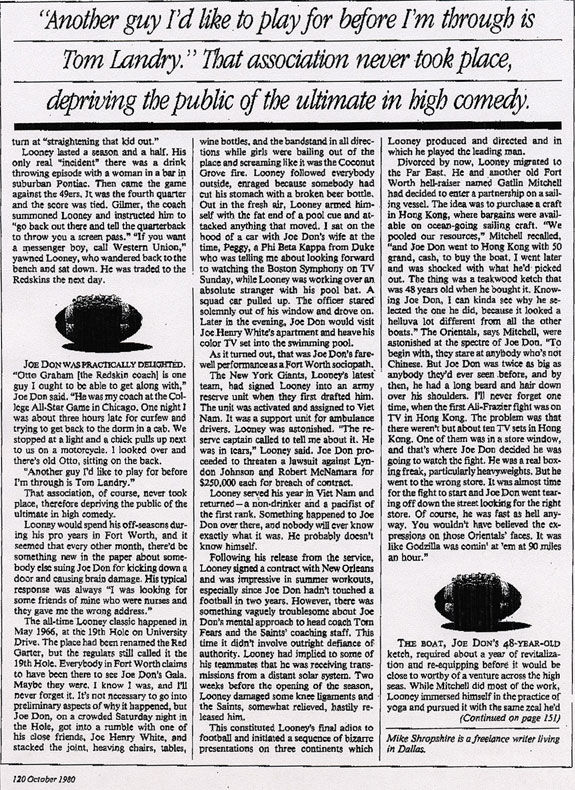 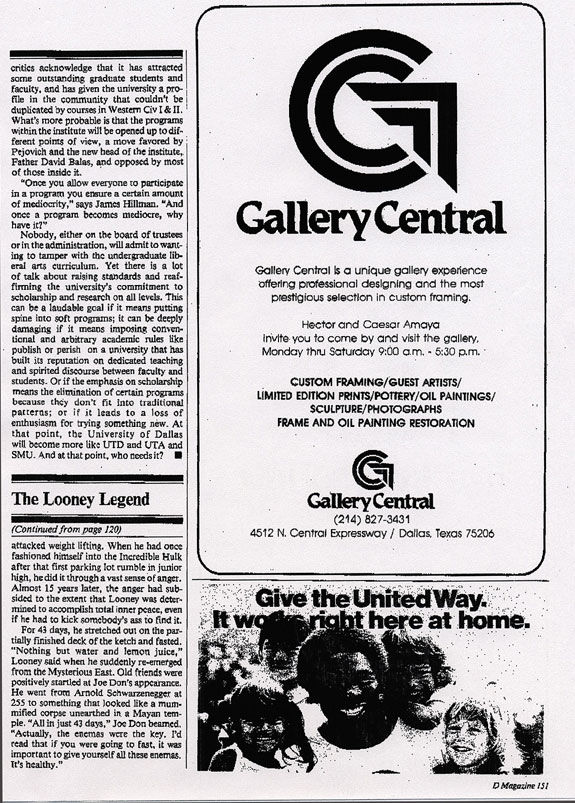 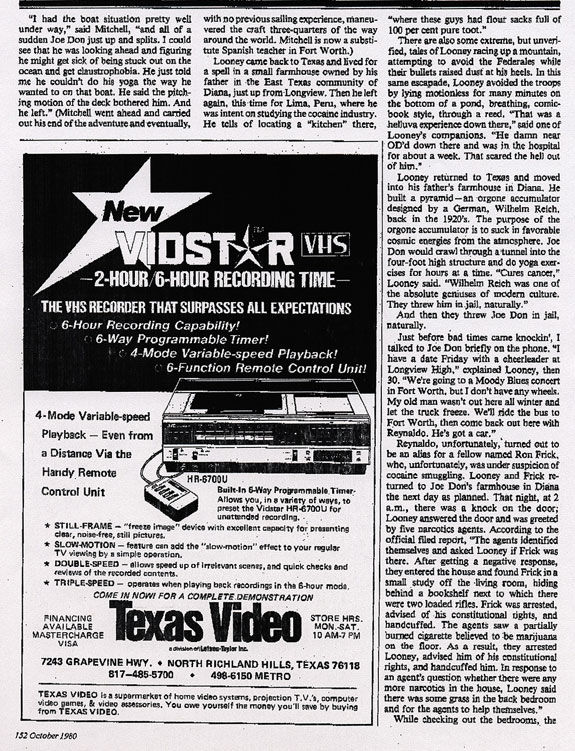 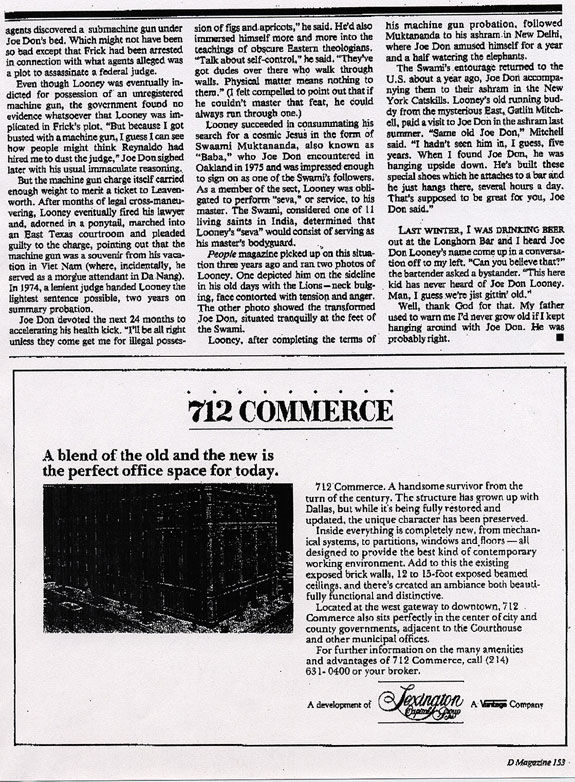