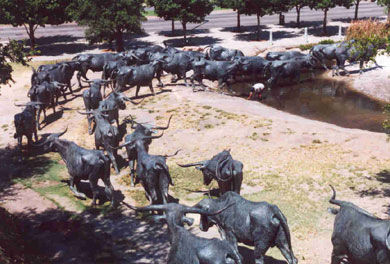 Those staying in Dallas should take the opportunity to visit downtown's Thanksgiving Square, Nasher's Sculpture Center, the Dallas Museum of Art, the Dallas Heritage Village at Old City Park and the Fairmont Street galleries. The metroplex benefits mightily from the energy of many internationally recognized resident artists. Further proof can be found in the cool creations that sprang up around Fort Worth's Art District, Valentine's '04. Party in Deep Ellum or two-step at Gilley's Super Honky Tonk (think John Travolta and Urban Cowboy.) Rural cowboys can be found at the Mesquite Championship Rodeo. The Historic West End Marketplace abuts the Dallas Courthouse and John Neely Bryant's log cabin. Captains Sloan and Journey led the first Texas Rangers here in 1838; they camped beneath where the Reunion Tower now stands. 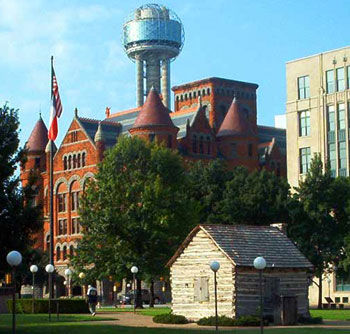 The Mansion and The Adolphus compete for the best digs and grub title but it doesn't take much money to sample the pizza at The Egyptian or Prego's, or the barbeque at Sonny Bryan's. 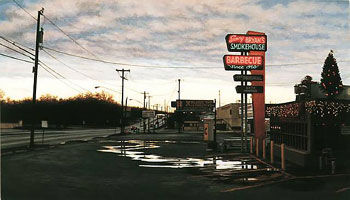 Mike Shropshire offers the following description of Dallas in his new book, Runnin' With the Big Dogs, about the Texas/Oklahoma football wars.

Forget the image that some people have of Dallas as this bastion of uptight Baptist intolerance. Nonsense. After Jack Ruby got sentenced to die in the Texas electric chair, to ride Old Sparky (that got overturned, most people forget), his lawyer, Melvin Belli, called Dallas "the city of hate." C' mon. Give it a rest. People don't come pouring into Dallas and its pulsing neon streets to spend their money on hate. Harry Hines Boulevard, which winds out of downtown Dallas northwesterly for about ten miles, is to Dallas as the Mississippi River is to St. Louis. Taverns, smelling of Lysol and cigarette smoke that hangs in the air thick as cotton candy, line the boulevard. Next door are always places where the rooms come with little sheds where a gentlemen can conceal his automobile. I've been around this place a long time, and I can tell you that Dallas is okay, and around the clock the streets are alive with people loaded on everything from acid to Zoloft. Jimmy Dale Gilmore, in his song "Have You Ever Seen Dallas from a DC-9 at Night," says that "Dallas is a rich man with a death wish in his eye."

Most people see Dallas as something else. ..a pretty woman who likes for people to buy her nice things. More Mike