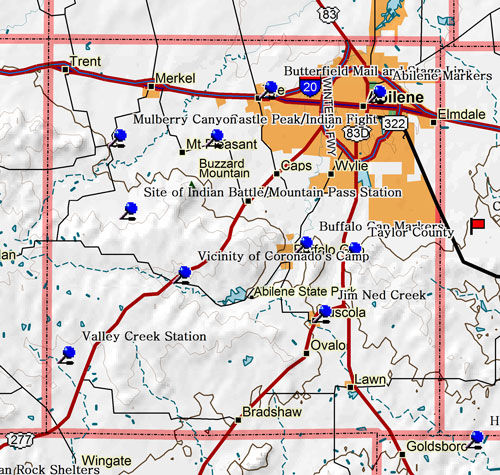 Marker Title: Town of Buffalo Gap
Address: West and Vine St.
City: Buffalo Gap
Year Marker Erected: 1968
Marker Location: Old Settlers Reunion grounds, corner of West & Vine Streets, Buffalo Gap.
Marker Text: Probably named for the pass in Callahan Divide (mountains) crossed by thousands of buffalo that once inhabited this area. Besides providing the native Apache and Comanche Indians with food, buffaloes drew the first white hunters here, about 1874. First homes in present town were dugouts of buffalo hunters. The community began to grow in 1878 when it was named county seat and was located on the western cattle trail. In 1883, however, the new railroad town of Abilene became county seat and Buffalo Gap, like so many small Texas towns, lost prestige.

Marker Title: Buffalo Gap Cemetery
Address: FM 89, 1 mile W. of Buffalo Gap
City: Buffalo Gap
Year Marker Erected: 1968
Marker Location: From Buffalo Gap, go about 1 mile west on Highway 89 to cemetery entrance.
Marker Text: Oldest public cemetery in Taylor County; used by residents of Buffalo Gap even before the earliest known headstones were erected, about 1877. In the older section of the ten-acre plot are 146 graves, many of Civil War veterans and pioneer citizens of Taylor County. Tract is still in use. (1968)

Marker Title: Butterfield Mail and Stage Line
Address: FM 20, 1/2 mile W. of Tye
City: Tye
Year Marker Erected: 1969
Marker Location: From Tye, take Highway 20 .5 mile west.
Marker Text: One of major horse-drawn transportation projects of history. Was authorized by Act of Congress on March 3, 1857. Contract for semi-weekly service overland to San Francisco, California, was awarded to company headed by John Butterfield; another stockholder in the $2,000,00 venture was express pioneer William G. Fargo. The line employed some 2,000 people and used hundreds of stagecoaches and thousands of animals. In addition to receipts from freight and passengers, it had a $600,000 annual subsidy for carrying U.S. Mail. Company operated from September 1858 to February 1861 with a 25-day schedule for the 2,795 mile trip (8 to 9 days were allowed for crossing Texas). Route began in Tipton, Mo., and Memphis,TN., uniting at Fort Smith, AR., entering Texas near Sherman, thence westward through the Comanche-held frontier, leaving the state at El Paso. Stage stations were located about every 20 miles and the best known in this vicinity were Fort Belknap, Fort Phantom Hill, Mountain Pass and Fort Chadbourne. Between Fort Belknap and Tucson, AZ., mules were used to pull the coaches as they were less appealing to Indians. Each coach accommodated four to ten passengers at an average fare of $200 each; mail and freight charges were ten cents per one-half ounce. (1969) More

Marker Title: Castle Peak
Address: FM 1235, S of Merkel
City: Merkel
Year Marker Erected: 1968
Marker Location: From Merkel, take FM 1235 south about 7 miles.
Marker Text: The Butterfield Overland Mail, the first public transportation facility spanning the area from the Mississippi to the Pacific with passenger and mail service, 1858-61, used the 2400-foot peak to the northeast as a beacon. The drivers and passengers viewed it for 30 to 40 miles. In that era it was called Abercrombie Peak, for Colonel J.J. Abercrombie of the U.S. Army, active in defense of this frontier. Waterman Ormsby, a newspaper reporter riding the first Butterfield Stage to pass this way, noted that the peak resembled a fortress. Later the height was renamed Castle Peak. (1968)

In Vicinity of Coronado's Camp

Marker Title: In Vicinity of Coronado's Camp
Address: US 277 & FM 89 junction
City: Abilene
Year Marker Erected: 1968
Marker Location: From Abilene, take Highway 277 southwest about 15 miles to junction 89.
Marker Text: In 1541, the Spanish explorer Coronado is thought to have passed this way en route from New Mexico to the fabled Indian villages of "Quivira", through his path across vast Texas plains is now difficult to determine. Upon finding that his Indian guide, "The Turk", had taken him too far south, Coronado halted at a small canyon or barranca. Here he conferred with his captains and decided to follow the compass directly north. When they reached "Quivira" (possibly in Kansas), no gold was found - only the poor, grass huts of a Wichita village. (1968)

Near Site of Indian Battle

Marker Title: Near Site of Indian Battle
Address: CR 351, S of Merkel
City: Merkel
Year Marker Erected: 1968
Marker Location: From Merkel, take FM 126 south 14.4 miles to CR 350 and follow south about 21.4 miles then take CR 351 south .9 mile.
Marker Text: On February 15, 1870, Corporal Hilliard Morrow and five men of Company E, 24th U.S. Infantry, set out from Fort Griffin to relieve guards at Mountain Pass mail station near here. Soon after arriving, however, they were besieged by a raiding party of 75 Comanches. Although outnumbered by more than ten to one, the courageous group repelled the attack. The Indians, however, drove off five mules and one horse belonging to the El Paso and San Antonio Mail Company, which ran a branch line to the station. Three of the Indians were killed, but the soldiers suffered no losses. (1968)

Marker Title: Vicinity of Indian Fight
Address: Fm 1235
City: Merkel
Year Marker Erected: 1968
Marker Location: from Merkel, take FM 1235 about 7 miles south.
Marker Text: On New Year's Day, 1871, Indian raiders who had stolen horses in Coleman County were pursued and overtaken here by 18 Texas Rangers and cowboys. Leaders of the group were Captain James. M. Swisher and rancher Sam Gholson. The Indians took refuge in the heights west of Mountain Pass. The ensuing battle lasted all day, and at nightfall the raiders left the horses and fled. Of the fewer than one dozen Indians, one was killed, several wounded. One cowboy was wounded and another, J.M. Elkins, recorded the battle in his book, "Indian Fighting on the Texas Frontier." (1968)

Marker Title: Mountain Pass Station
Address: CR 351, SW of Merkel 32 mi.
City: Merkel
Marker Location: From Merkel, take FM 126 south about 14.4 miles to CR 350 and follow 2.4 miles south to CR 351 south and follow 9 miles.
Marker Text: Maintained from 1858 to outbreak of the Civil War in 1861 as a stage stop on the Butterfield Overland Main Route, which was the first mail and passenger line to link the east and west coasts of the United States. In 1870s this was a stop for branch of El Paso and San Antonio mail line. (1968)

Marker Title: Mulberry Canyon
City: Merkel
Year Marker Erected: 1997
Marker Location: 6.2 mi. SW of Merkel on FM 126 at intersection with FM 1085.
Marker Text: Human activity in this area has been traced to prehistoric eras. Native American tribes once roamed this land with the buffalo, deer, turkey, mountain lion, and black bear. Among the first recorded ventures into the canyon were the Military Road survey and the forty-niner mail route of 1849. The Military Road was used by the Butterfield Stage-Overland Mail route from 1858 to 1861. The canyon was named for the mulberry trees that grew along the largest creek. Cattle ranchers began to use the canyon in the 1870s. The last herds of buffalo passed through Mulberry Canyon in 1878 just before pioneer families began to build communities. In 1879 settlers planted maize, corn, and wheat; the first cotton was planted in 1886. The last black bear lived as a pet on the Brown Ranch in the 1880s. Over half a dozen small communities sprang up in the canyon. Ten churches and ten schools have served the area, which at its peak had a population of 500. The earliest marked grave in White Church Cemetery is dated 1883. Nubia, the only town, had a post office until 1917. The last store closed in 1946. In 1997, descendants of the pioneer settlers still occupied much of Mulberry Canyon. (1997)

Marker Title: Taylor County
Address: US 83/84, S. of Abilene
City: Abilene
Year Marker Erected: 1964
Marker Location: From Abilene, take Highway 83/84 south about 12 miles to Roadside Park.
Marker Text: Created 1858. Named for Edward, James and George Tayor, 18, 20, and 22, Tennesseans who came to Texas in 1833 and died at the Alamo, March 6, 1836. Organized 1878, with county seat at Buffalo Gap, through which went the Fort Concho to Fort Belknap stagecoach and longhorns on western trail up to Kansas. County seat was moved to Abilene in 1883. Of the 254 Texas counties, 42 bear Indian, French or Spanish names. 10 honor such colonizers as Stephen F. Austin, "Father of Texas". 12 were named for Washington, Clay and other American patriots. 96 were named for men like the Taylors who fought in the Texas War for Independence (15 dying at the Alamo), signed the Declaration of Independence, or served as statesmen in the Republic of Texas. 23 have the names of frontiersmen and pioneers. 11 honor American Statesmen who worked for the annexation of Texas; 10, leaders in Texas since statehood, including jurists, ministers, educators, historians, statesmen; and 36, men prominent in the Confederacy during the Civil War. El Paso and 8 others have geographical names, San Jacinto and Val Verde were named for battles; Live Oak and Orange, for trees; and Mason for a fort. (1964)