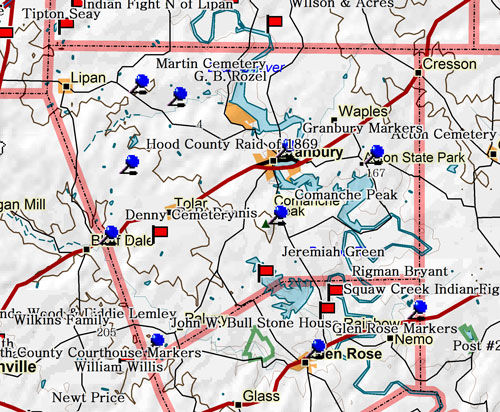 Marker Title: Comanche Peak
City: Granbury vicinity
Year Marker Erected: 1969
Marker Location: from Granbury, take SH 144 about 3 miles south.
Marker Text: Prominent Indian and pioneer landmark. Actually a Mesa, the peak rises 1,229 feet (above sea level). May have had ceremonial value for local tribes or have been a look-out point for game and enemies. A Comanche trail crossed county in this vicinity. In 1846 whites and indians en route to the so-called "peak" for a meeting almost failed to find it because of its flat top. Later settlers held dances here and students from Add-Ran College (about 10 miles north) had picnics at the peak. Boys also hunted wolves and rattlesnakes among caves and rocks on the top. More

If you have the time for this longer trip, from Granbury, continue past Comanche Peak to Glen Rose on Hwy. 144. Take I-35 to visit Parker's Fort near Mexia and the Texas Ranger Museum. 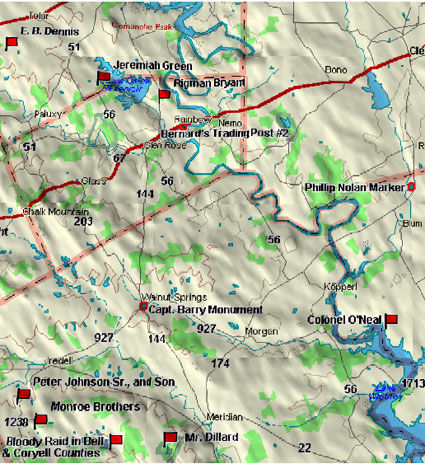 Marker Title: Martin Cemetery
City: Lipan vicinity
Year Marker Erected: 2001
Marker Location: 5 miles east of Lipan on FM 4 to Diamond A Ranch, then 2 miles down main ranch road through two gates.
Marker Text: A reminder of pioneer life in Hood County, the Martin Cemetery may have had its origins as early as 1859 when Nathan Holt was buried on the property after being killed during an Indian attack. The graveyard is named for the family of William Harvey Martin, who came to Texas from Illinois in 1855 and obtained the land on which the cemetery rests in 1876. The oldest tombstone--dated June 17, 1868--is that of Spencer Marion Self, infant son of David and Frances Self, while a reproduced stone marks an even earlier burial, that of Elizabeth Fortner Holt, from about 1860. Grave markers of granite, concrete and hand-carved stone reflect the lives of those buried here and stand as testament to the area pioneers. (2001)

Marker Title: so-called "Squaw Creek" Indian Fight
City: Glen Rose
Year Marker Erected: 1965
Marker Location: FM 144 N of Glen Rose about 2 miles.
Marker Text: Civil War frontier victory, near this site. About 25 raiding Indians jumped a fox hunter, Rigman Bryant, killed him, shot his dog, stole his horse. That afternoon the Indians and stolen horses were seen by a minister, Silas Scarborough, W. C. Walters and an African bringing home a turn of meal from the gristmill. Scarborough and Walters headed into a cedar brake. The Indians urged the African to join them, shot him full of arrows when he refused. In a few hours the Cavalry attacked the Indians, recovered the horses, killed one Indian, chased the others away. One settler was shot. In a week the wounded African died. Many of the 1848-1861 settlers on the Paluxy and so-called "Squaw Creek" were away in the Confederate army. Very young boys and elderly men joined defense forces. Some drew military duty for 10 days, were off 10 days to look after mills, cattle, horses and farms. For safety, women dressed as men while their sons, husbands and fathers were away. At times 50 to 100 tents were used in hasty "forting up" of families. During the war, Alex McCammant established county's first tannery, using cedar leaves in processing hides. For cloth making, county's first cotton was grown.