During July of 1863, J. Green, Wylie Price, Woodson and A. Bell, were riding the ranges in the western part of Hood County between the Paluxy and so-called "Squaw Creek". After going for several miles in the hot summer sun, the citizens went to the creek for water. They then rode upon a hill, to let their horses graze. Before the Texans dismounted, however, sixteen savages were discovered a short distance away, and apparently waiting to see what move the whites were to make. The five whites had but two guns, and were divided in opinions as to whether or not they should make a hasty retreat, or stand their ground. One of the whites, it seems, became somewhat excited and fled, and in a few moments, he was followed by two others, who were riding splendid horses. The two remaining whites were riding inferior animals. Woodson Bell was riding a mule. So the two were soon outdistanced by their companions. When Woodson Bell, who was armed, was closely pressed by the savages, he dismounted and successfully escaped in a thick cedar break. Green, however, also unarmed and riding a slow horse, was soon overtaken, and received a mortal wound. The citizens who escaped, reported to the nearby settlement, and in a short time reinforcements arrived. But it was too late. They soon discovered the bloody trail of Jeremiah Green, who had escaped in the dense cedar breaks, after he received a mortal wound.

Ref.: History of Hood County by T.T. Ewell, and Wilbarger's Indian Depredations in Texas. Also interviewed James Newberry and others that then lived in that section. 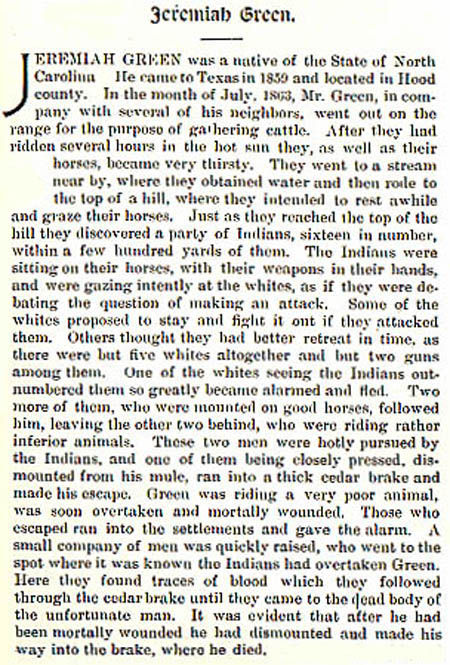