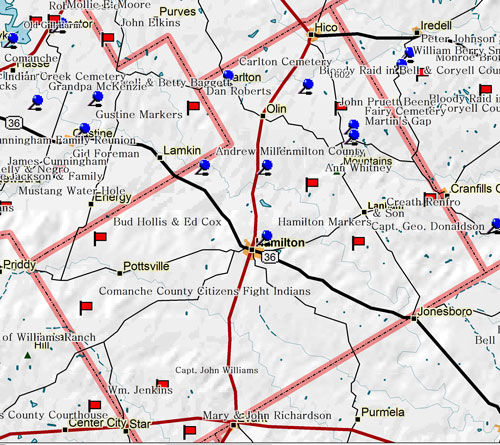 Marker Title: Carlton Cemetery
City: Carlton
Year Marker Erected: 1998
Marker Location: FM 2823.
Marker Text: Carlton Cemetery is commemorative of the growth and decline of a fading community as agriculture and railroads changed the destiny of small Texas towns. Local lore places the first grave at this site in 1867 when J.E. Pinkerton, a farmer, was killed by a band of Indians. After hitting solid rock, area settlers moved 200 feet to the north, where they established Pinkerton's grave with a 16-inch high solid native stone bearing only his initials on a chiseled shield. The village of Carlton was organized in 1876 and named for Dr. F.M. Carlton, who was buried here in 1897. James Monroe McCarty rests in the first dated grave, inscribed January 21, 1872. Of 1,278 graves counted in 1997, 213 are unmarked. Of these, 22 anonymous graves date from the influenza epidemic of 1918-1919. Also buried here is Deputy Sheriff Audie Gibson, killed by bandits in 1932. Carlton natives have faithfully maintained the cemetery in honor of their relatives, friends, and the many local veterans who served their country. The Carlton Cemetery Association was formed in 1957. L. W. Fine, cemetery overseer, was the last person to be buried by his neighbors in 1957. Burial services have since been assumed by funeral homes. (1998)

Marker Title: Fairy Cemetery
City: Fairy
Year Marker Erected: 1994
Marker Location: from Hico southern city limits take FM 1602 south 9.5 miles to Cemetery (on East side of road).
Marker Text: First called Gap for its geographic setting between two hills, this sparsely settled community became known as Martin's Gap in the 1860s after a man named Jim Martin reportedly was killed by Indians while traveling through the area. When local citizens applied for a United States Post Office in 1884, the name Fairy was chosen in honor of Fairy Fort Phelps (1865-1938), the petite daughter of pioneer settlers Battle and Sallie Fort. Fairy and her father taught area children in a school in their home for many years, and the Fort family donated land to several area churches. Although the earliest known burial occurred here about 1880, deed records show that this graveyard was not officially set aside as a community burial ground until 1890. Among those interred here are numerous pioneer settlers, dozens of victims of the 1918 influenza epidemic, at least one Texas Ranger, and veterans of the Civil War, World War I, World War II, and the Korean War. Encompassing three sections, the cemetery contains many distinctive handmade gravestones and other types of grave markers. Maintained by a local association of descendants, the cemetery is a reflection of the area's pioneer heritage. Recorded-1970

Marker Title: Hamilton County, C.S.A.
City: Hamilton
Year Marker Erected: 1965
Marker Location: from Hamilton city limits, take US 281 north 6.6 miles to marker (in roadside park on east side of road).
Marker Text: Created and organized in 1858. By 1860 had 489 people in 78 families from 15 states. Vote in 1861 was 86-1 in favor of secession. 60 farmers were organized as Hamilton County Minutemen, a unit of part-time soldiers. Others joined Confederate regiments and fought at Vicksburg, Shiloh and other memorable battles. During the Civil War, travel was on horseback and hauling by ox wagon. Homes were of logs split from timber along creeks and rivers. About half an acre a day was farmed, with homemade wooden tools. Corn and wheat were raised. On burned-over ground each family grew its own tobacco, hanging the leaves inside the living room to dry. Diet was mostly beef, cornbread and coffee substitutes. Homes were lighted by wicks stuck into tallow-filled eggshells. With few men on hand to brand and herd, feuds rose over thefts and straying cattle. In differences over war issues, 2 men fled to Mexico to join Federals. Later they returned, trying to recruit neighbors into a unit disloyal to Texas, to welcome planned Federal invasion. Further trouble came from many Confederate deserters who took refuge along the streams and lived by theft and violence.

Marker Title: Ann Whitney
City: Hamilton
Year Marker Erected: 1993
Marker Location: located at intersection of US 281 and Francis Marion Rd. (about 7.8 blocks north of Courthouse Square).
Marker Text: Elizabeth (Ann) Whitney, a native of Missouri, accepted a teaching position at a newly erected rural school located about seven miles north of present day Hamilton in 1867. This school, called the Leon River School, was situated on a rise overlooking the Warlene Valley. On a hot summer afternoon in 1867 Ann and her students were suddenly attacked by Comanche Indians. According to local tradition Ann was repeatedly struck by arrows fired through cracks in the schoolhouse walls. Although fatally injured she nevertheless bravely aided the escape of all but one of her young students.

Marker Title: Ann Whitney
City: Hamilton
Marker Location: located in center of old Hamilton City Cemetery, just off US 281 north 7-8 blocks from courthouse square.
Marker Text: (1839 - 1867) Described as a stout lady with an engaging personality, Elizabeth (Ann) Whitney confirmed that she could be strong, brave, and resourceful on one fateful July day in 1867. Ann was a teacher at a nearby frontier school. Suddenly, during the course of a typical school day, a party of Comanche Indians attacked. Reportedly pierced by 18 arrows during the ordeal, Ann Whitney nevertheless helped all but a young boy escape before dying herself.