Murder of Miss Ann Whitney, Mr. Standley and Wounding and Capture of Others

As usual there is a slight variation between different accounts of this particular raid. Nevertheless, all reports are substantially the same, and every effort has been made to obtain the most accurate information.

A new school building had been constructed in Warlene Valley, about 75 or 100 feet south of the Leon River, and about seven miles northeast of Hamilton. Miss Ann Whitney was the first school teacher. The building was constructed of unfinished logs, and conformed to the usual frontier architecture. The furniture and floor of the school building were also constructed of unfinished timber, and it was possible to lift some of the logs of the floor, and crawl under the house. Since the schools during those days were taught in the summer, the buildings were well ventilated because of the large cracks between the picket walls. This school building had a door in one end, and a window in the other.

The following pupils were among those who attended Miss Ann Whitney's school: Olivia Barbee, Jane Amanda and John Kuykendall, Wm. Baggett and sister, Mary Jane and Louis V. Manning, Grabiella and Alex Power, John H. Cole, and some of the Gann, Dean and Massingill children and, perhaps, some others.

Olivia Barbee, the twelve year old daughter of John Barbee, lived eleven miles away, but was boarding near the school. The day of this awful tragedy, which occurred July 11, 1867, Olivia Barbee was expecting her father and his cowhands. About two o'clock in the evening of the above day, Grabiella Power, who happened to be looking out the door, saw in the distance several men whom she thought to be Indians. But since Mr. Barbee was expected, Miss Ann Whitney ordered Grabiella to take her seat, and told her it was only cowmen. Grabiella, however, could not be mislead and a few seconds later took another look, and cried out, "They are Indians." She then took the hand of her little brother, Alex Power, jumped out the window and hurried to the roughs along the river, only a short distance away. Miss Ann Whitney was not sufficiently aroused to go to the door and to her surprise, she saw several Indians untying Mary, her faithful horse. Miss Whitney had previously several times said, "When they take Mary, my horse, I want them to take me also." She then closed the door, which had been opened because of the warm summer weather. Most of the children were now climbing out of the window, and hurrying to the rough and rugged breaks and banks along the river. But Mary Jane Manning clung to the rclothes of her teacher, who boarded with Mr. andMrs. Ezekial Manning, parents of Mary Jane. Olivia Barbee said, "Let's get under the floor." So Olivia and Louis V. Manning lifted up a log and crawled under the house. John H. Cole, John Kuykendall and his sister also remained in the house. John Kuykendall's sister hid behind something in the corner of the room.

Only four of the Indians came to the school to do their deadly work. But miraculous things often happen to turn the tide during times of distress, and it so happened on this occasion. The savages discovered a Mr. Standley and his family, who were moving in an ox wagon, about one mile away. They also discovered Amanda Howard and her sister-in-law, Mrs. Vol Howard, who happened to be horseback riding in the valley, thought the Indians were cowmen and approached within a few hundred yards of the Indians before they realized their mistake. This three-cornered affair, no doubt, created much excitement among the savages as well as the citizens, and prevented a much greater tragedy at the little school house.

But the four Indians came on up to the frontier school and began to drive their arrows through the cracks of the walls into the very vitals of Miss Ann Whitney. Fortunately none of the arrows struck little Mary Jane, who still clung to Miss Whitney's clothes. But she was being stained with blood issuing from Miss Whitney's body. One of the Kuykendall boys received a severe arrow wound, either before or after he left the little building. In a very short time, Miss Whitney had about twelve arrows driven into her body, and when she began to sink to the floor, Mary Jane Manning released her clothes, jnumped out of the window, and also ran for the river. About this time the Indians began to beat on the school door to perfect an entrance, and after they did, little Louis V. Manning, whom the author interviewed, about two hours ago, became excited, came out from under the floor, and was again in the school room.When he saw what was transpiring, made a dash for the window and accidentally ran down the banks of the Leon into the very arms of Mary Jane, his sister, who held him closely to her bosom.

The Indians entered the school room to finish their deadly work, and found Miss Whitney already dying with approximately eighteen arrows buried deeply into her feminine form. During this entire ordeal, eye and ear witnesses said that Miss Whitney never murmured excepting she pleaded and prayed that the savages spare her children. A warrior on the outside discovered Olivia Barbee, who was hidden under the house, and was in the act of placing her on his horse when he was called on the inside by the warrior who first opened the door, and who was already on the inside of the little school. When the second Indian went on the inside, this gave Olivia an opportunity to run away. The poor girl had been so frightened, it seems she became somewhat deranged and wandered so far away, was not found until the succeedding day. According to reports, this poor child had almost gone wild. John Massingill Sr., who found her, had to run Olivia down. But kind and proper treatment restored her to normal condition. Little John Massingill, who remained in the house, was made a prisoner and carried into captivity. John H. Cole, also remained in the house, and when the Indians retired from the schoolroom, John H. Cole went through the window and hurried to the high banks of the Leon, where many of the remaining children were hidden. The savages now hurried back toward their main command, who, no doubt, were already charging Mr. Standley and his family and pursuing Amanda Howard and her sister-in-law, Mrs. Vol Howard.

John H. Cole, who was in the house until after the Indians left, and who saw the savages lead John Kuykendall away, stated one of the men with the Indians wore a big broad hat and appeared to be either a Mexican or white man. According to the reports of others, the mysterious redheaded man again made his appearance. But we are not inclined to believe that a former sweetheart of Miss Ann Whitney was with the savages, as has been reported.

Let us turn our attention now, to Mr. Standley and his family, who were traveling in an ox-wagon, about one mile away. Mr. Wilbarger, in his book entitled, Indian Depredations in Texas, no doubt, erroneously called Mr. Standley, Mr. Stangeline. Many are there today who will say the author is incorrect when he calls the stepfather of Ben and Mollie Underwood, Mr. Standley. About thirty years ago Mr. A.J. Sowell wrote an account of the killing of Miss Ann Whitney, and his story was published in the Houston Post. In 1902, 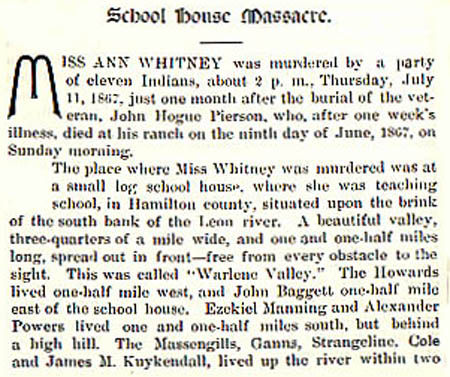 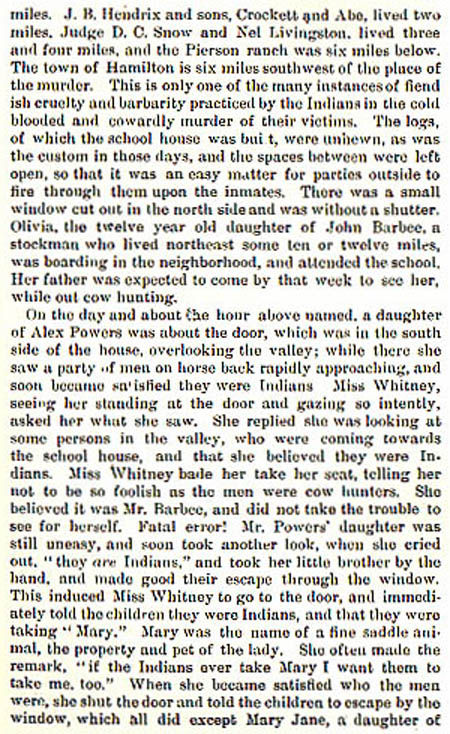 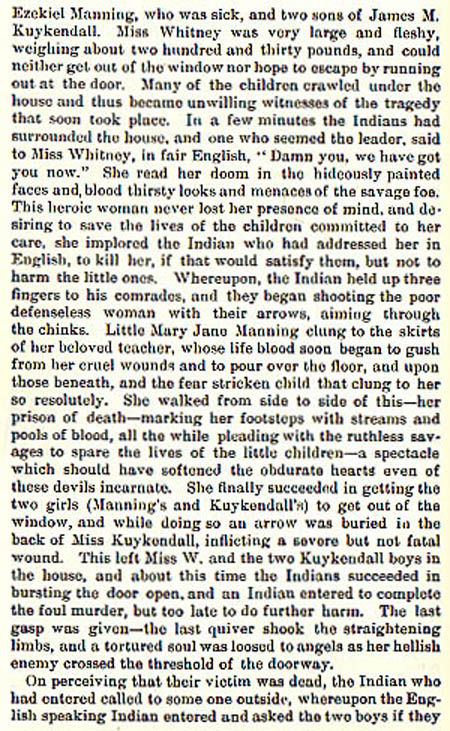 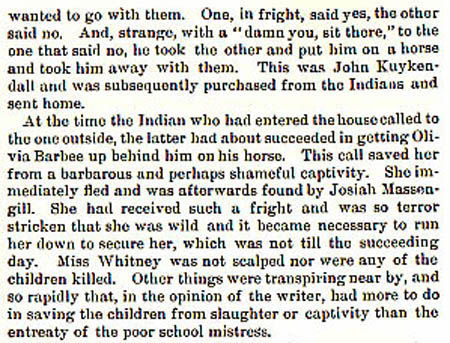 The above version of the schoolhouse murder is from J.W. Wilbarger's book Indian Depredations in Texas.

The Mr. Standley that was murdered by the Indians, as well as schoolteacher, Miss Ann WHITNEY, in Hamilton County, Texas in 1867-the correction of Mr. Standley should be Hugh STANALAND that married Rutha (MASSINGILL) UNDERWOOD 20 September 1865 in Angelina County, Texas. Hugh STANALAND that was murdered during the raid by Indians and murder of Miss WHITNEY, is buried beside one of maternal ancestors, 3 great grandfather, Shadrack HOWARD, in two unmarked gravesites known as HOWARD-STANALAND Cemetery in Hamilton County, Texas. Thank you, Betty Cole Wienke