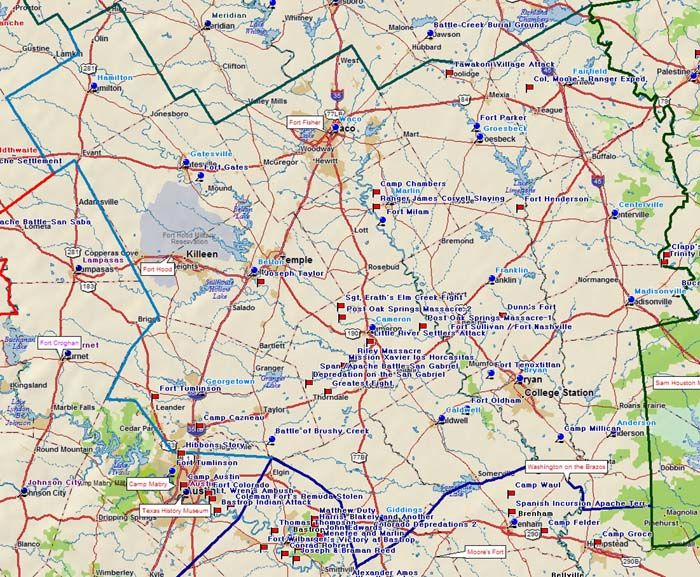 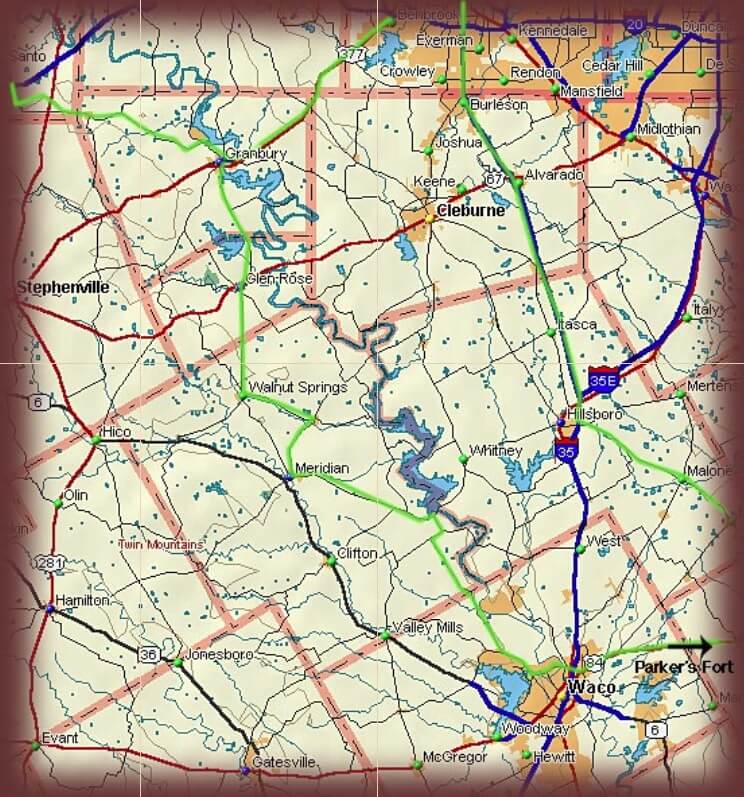 The sites covered on the map are of battles and massacres for the counties of Bosque, Erath, Hamilton, Hill, Hood, McLennan and Somervell.

The Brazos Valley Road Trip offers a more westernly alternative to I-35W. Must stops include the fantastic square at Granbury, perhaps the gem of all small town squares; a spectacular array of lodging, dining, camping and golf facilities are available, many encompassing Lake Granbury.

Arguably one of the most beautiful public camp grounds anywhere is located at Tres Rios in Glen Rose right across from the equally impressive so-called "Squaw Creek" Golf Course. Glen Rose is also home to the tourist attractions Fossil Rim Wildlife Center and Dinosaur Valley State Park. Don't miss the historical markers in the Walnut Springs Park dedicated to Bryant and Capts. Barry and Cureton.

Fort Parker State Park offers excellent public camping facilities around the magnificently reconstructed replica of the historically important family stockade. This is the site of the beginning of the forty-year Texas/Comanche War.

Don't miss the Texas Ranger Museum at Fort Fisher in Waco, right next to the Brazos River on I-35. Waco seems to be the repository of many culinary traditions including the home of Dr. Pepper, and at least at my last visit, it boasted a Leslie's Fried Chicken Stand and Underwood's Barbecue cafeteria. 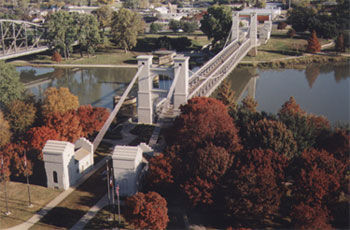 Bridge Over Brazos in Waco

The Brazos River is truly mighty by the time it reaches Waco and is an attraction in itself. The area is home to the Waco band of Wichita Indians; the occasional victims of passing Spanish armies since the 1600s. This was also the location of the wild horse corrals built by American adventurer Philip Nolan in the late 1700s. He and his men fell victim in 1801 to a Spanish army sent to rid the countryside of American filibusters, the term for a land-bound buckaneer or pirate. A third of a century later the trespassing Americans called themselves "Texians" and formed a Republic which authorized the establishment of Torrey's Trading Post on this part of the Brazos. This act encouraged settlement but as the frontier grew to the northwest, many pioneers accused the trading post of providing alcohol and weapons to the raiding Indians.