Creath Renfro was born in Iowa, December 2, 1806. He married Susan McMahan, and in 1849, together with his family, moved to Texas. During 1857, the Renfros moved to a point about three miles southwest of Cranfill Gap, and established a stock farm in the corners of the present Bosque, Coryell, and Hamilton Counties. Francis had improved a place. He and his father went early one morning to find the stock, for they were going back to their former home, six miles from Lancaster, where Francis was to be married. David Conway was also sent out in search of the same stock, but he went one direction, and Mr. Renfro and his son another. Conway found the horses, drove them home and put them in the corral. He then hitched up an ox team and started toward Lancaster thinking that Mr. Renfro and his son would soon overtake him. Later during the same morning, the horse Francis had been riding ran home, and was smeared with blood. A searching party was soon sent out, and his body was found in a short time where Francis had been massacred by the Indians. Mr. Renfro, however, could not be found. For three or four days the settlers of that section searched in vain. Mrs. Renfro afterwards stated that for three years she never heard the dogs bark unless she thought perhaps it were her lost husband returning home. About three years later, some cowmen found the body of Mr. Renfro where he had died on Neil's Creek about three or four miles southwest of Cranfill's Gap. After being mortally wounded he rode his horse into a thicket at this point, unsaddled his horse, and made a bed out of his saddle and overcoat, on which he lay, nobody knows how long, mortally wounded and finally died. He was identified by the initials on his saddle and his pocket knife. Where he was found was an extremely brushy place, and if some thirsty stockmen had not come to this point for water, no doubt, it would have been considerably later before his remains were discovered.

David Conway reached Lancaster before he learned of the misfortune of Mr. Renfro and his son. The news of their death had a shocking effect on the entire Texas frontier, for their massacre marked the beginning of a long and bitter conflict waged with West Texas Indians.

An investigation of this tragedy was made among the Indians of the several government agencies, and according to early reports, it was done by the Kickapoos, who were ever known to be treacherous; but still professed to be a friendly tribe. Some of the early frontiersmen were of the opinion that Indians of the Texas Reservation, played an important part in the killing of Mr. Renfro and his son.

Ref.: Before writing this section, the author conversed and corresponded with Mrs. M.S. Murphy, a granddaughter of Creath Renfro, O.M. Braunsted, J.M. Robertson, Frank Gholson, Mrs. Swenson, Jacob Olston, and several others who were living in Bosque, Coryell, Hamilton and other adjoining counties at the time, or shortly afterwards. The author drove several hundred miles to gather the facts for this single story.

A slightly different version of this story appears in J.W. Wilbarger's book, Indian Depredations in Texas: 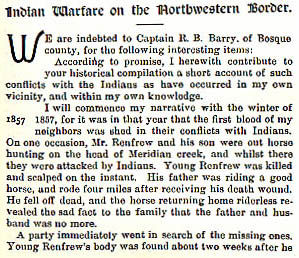