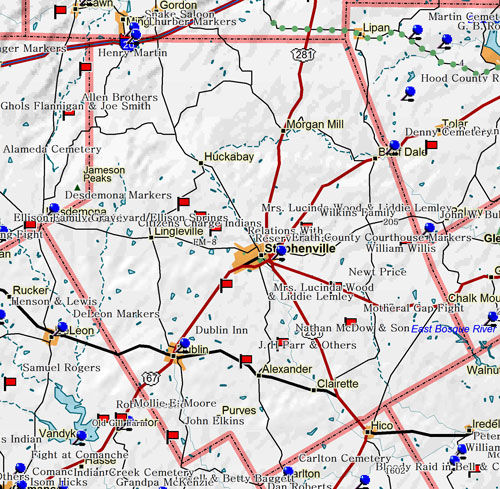 Marker Title: Denny Cemetery
City: Bluff Dale vicinity
Year Marker Erected: 1983
Marker Location: 1 mile east of Bluff Dale on US 377.
Marker Text: Alfred W. Denny (d. 1877) came to Texas in 1853, settling first in Clarksville, and then moving to Weatherford in 1860. During the Civil War (1861-65) Denny served in a Ranger unit stationed at Stephenville that guarded Texas' western frontier. In 1867 he bought 320 acres, which included the site where he was later interred. There are 17 known gravesites of family members in the Denny Cemetery, including Denny's wife Mary Elizabeth and infant grandson Walter Calloway Baldwin, who was killed by a horse in 1879. The burial ground was restored in 1982. (1983)

Marker Title: Erath County Courthouse
Address: 100 Washington
City: Stephenville
Year Marker Erected: 1963
Marker Location: Corner of Washington and Graham.
Marker Text: Founded in 1854 and named for early settler and land donor John M. Stephen, the town of Stephenville became county seat when Erath County was created in 1856. The first county courthouse, a wood frame structure built in 1856, was destroyed by fire in 1866. By 1890 Erath County was experiencing an economic boom. The railroad had reached this area in 1889, and local business increased as shipping opportunities improved. County commissioners called for bids to design a new courthouse in 1891. J. Riely Gordon submitted the winning design. The construction contract was awarded to S.A. Tomlinson of Fort Worth. Gordon, who became a nationally known architect, had designed two earlier buildings on the town square (the First National Bank and the Crow Opera House). He is well known for his Texas courthouse designs. A distinctive rendition of the Romanesque Revival style, this courthouse, completed in 1892, features striking use of locally-quarried limestone accented with Pecos sandstone. A 1988 restoration project included the addition of an adjacent courthouse annex. The central clock tower of the historic courthouse has been the most prominent feature of the surrounding landscape for more than a century. Recorded Texas Historic Landmark - 1963

Marker Title: Thurber
City: Thurber
Year Marker Erected: 1969
Marker Location: Smokestack Park area on northeast corner of I-20 and FM 108, Thurber.
Marker Text: Most important mine site in Texas for 30 years. Coal here, probably known to Indians, was "discovered" in 1886 by W. W. Johnson, who with his brother Harvey sold out to Texas and Pacific Coal Company in 1888. (T. and P. Coal Company provided fuel for the Texas and Pacific Railroad, but was independently owned.) Town was named for H.K. Thurber, friend of T. and P. Coal Company founders. Most dynamic firm member was Robert D. Hunter (1833-1902), developer of 7 of 15 mines. Next president was E.L. Marston, Hunter's son-in-law, who left mining largely to William K. Gordon (1862-1949), an engineer who brought daily output to 3,000 tons. Then in 1917, Gordon (backed by management of coal company) was primarily responsible for discovery of Ranger oil field, 20 miles west. Adoption of oil- burning railway locomotives cut demand for coal. Last mine here closed in 1921, and the 10,000 or more inhabitants of Thurber began to move away. The coal firm changed its name to Texas Pacific Coal and Oil Company and was sold in 1963 to Joseph E. Seagram and Sons, Inc., for $277,000,000.00. Renamed Texas Pacific Oil Company, it is now one of largest independent domestic energy suppliers. Much coal (by estimate 127,000,000 tons) remains underground. (1969)

During 1867, Geo. B. Danley, who lived in Erath County, was helping Bobbie Sloan move cattle to Colorado or Arizona. When the cowmen reached the edge of the plains in West Texas, Geo. B. Danley was murdered by Indians, who succeeded in catching him a short distance from his companions. The savages then drove two or three thousand head of cattle away. Geo. B. Danley was buried on the lone prairie, where for sixty-two years the wild coyotes have howled over his lonely grave.

Note: Author interviewed: Kye Danley, a brother, and others who lived in Erath County at the time.

About 1872, Charlie Ellington, was shot through the body by Indians. Ellington finally managed to get home. When the doctor was called, the wounded man was told he would die. Ellington replied that he was going to get well and did. This frontiersman was wounded about one-half mile from home in northern Erath County. 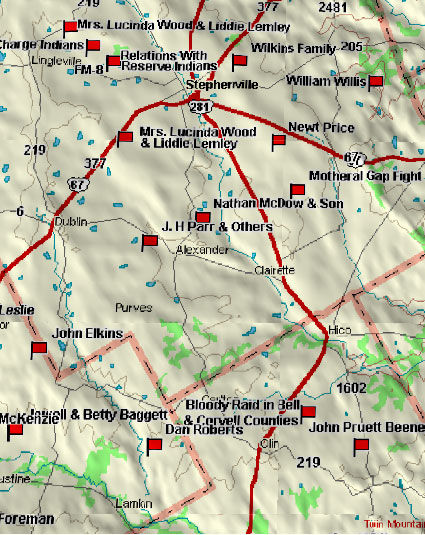 About 1869, while Dan Thornton was out hunting his horses, in the Barton's Creek country, approximately two miles west of the present town of Exray, in Erath County, several Indians surrounded him in a thicket. No doubt, at least one Indian was wounded, and Thornton, himself, received a severe wound.