Massacre of Mrs. Lucinda Wood and Liddie Lemley and the capture of Hulda and Nancy Lemley

John Lemley and family numbered among the first settlers of Jack County, and reached there late in 1854. Later they moved to Palo Pinto County and located on the Brazos, north of Palo Pinto, and lived close to Rev. Geo. W. Slaughter, and others. Early in 1860, Mr. Lemley moved his family to Erath County, and located near the present town of Lingerville. William Wood, also moved into the same community.

During February 1860, these two early frontiersmen were building homes about a mile apart, and had gone to the Leon River for building timber. Mrs. Lucinda Wood, aged sixteen, and wife of Wm. Wood, was staying with Mrs. Lemley. She was a daughter of Wm. Roberts. Mrs. John Lemley and baby, John, Jr. had gone to the home of Mrs. Matt Tucker, a short distance away to spend the evening. Later during the same afternoon (Dallie, as she was sometimes known), a daughter of Mr. and Mrs. John Lemley, and about ten or twelve years of age, also went over to the home of Mrs. Tucker. Mrs. Lucinda Wood, Liddie Lemley, whose exact age is not known, Hulda Lemley, then nineteen years of age, and Nancy, whose age is also unknown, were at the house alone.

Indians, screaming most hideously, came charging toward the house. The girls were so greatly frightened some of them ran out into the yard. Each of the four were then captured and carried about two miles, to point very near the present town of Lingerville. Here at least some of the girls were brutally assaulted by these barbarians. Afterwards, and just before dark, Mrs. Wood and Liddie Lemley, were released. When they started away, these unfortunate young ladies were lanced with spears and shot in the back with arrows. They, of course did not live to relate the tragedy. Hulda and Nancy were then placed on horses and carried in a southwesterly direction. The Indians took these two innocent pioneer daughters to a place about three miles southwest of Stephenville, where J.P. Skyler's water tank is now located. Here, early the next morning, after being in the clutches of bloodthirsty savages all night, they were released with little or no clothing to protect their bodies. These girls also fully expected to be spread and shot by the Indians when they started away. But fortunately the Indians no longer molested them.

Aunt Hulda stated, however, that the Indians did not say, "Stephenville go." On the contrary Mrs. Reasoner stated the Indians pointed toward the Lemley home.

The two girls followed wagon tracks and made their first appearance at the residence of Will Roberts, who lived about one mile from Stephenville.

The pioneer mothers of this frontier-log-cabin-village hurriedly made them sufficient clothing. When the author personally interviewed Aunt Hulda (Lemley) Reasoner in 1926, he was informed that only on few occasions had she ever discussed this catastrophe, even with her own people. In fact, the middle-aged daughter of Mrs. Reasoner stated that the story, the latter related to the author, was the most complete and contained details her mother had ever before made in her presence.

Mrs. Lucinda Wood, who had an abundance of light golden hair, was scalped, but Liddie Lemley's thin head of hair remained unharmed. The two were buried in the West End Cemetery, Near the present city of Stephenville. After this tragedy, Mr. John Lemley moved his family back to Palo Pinto County.

Ref.: Before writing this section, the author personally interviewed Aunt Hulda (Lemley) Reasoner herself, who was one of the daughters captured; Ike Roberts, who followed the Indians after the girls were released; Jim Woods, a nephew of Wm. Wood, W.C. McGough, Mrs. H.W. Carter, who was at the funeral of Mrs. Wood and Liddie Lemley; C.E. Ferguson, Mrs. Wm. Metcalf, J.C. Jowell, E.K. Taylor, Mrs. Mary J. Taylor, Mrs. Jane Bevers, Mrs. M.J. Hart, A.M. Lasater, B.L Ham, Joe Fowler, and many others who were living in Erath, Palo Pinto, and adjoining counties at the time.

The following is from the book, Painted Pole, by Barbara Belding Gibson: 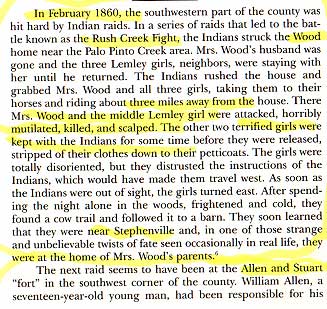 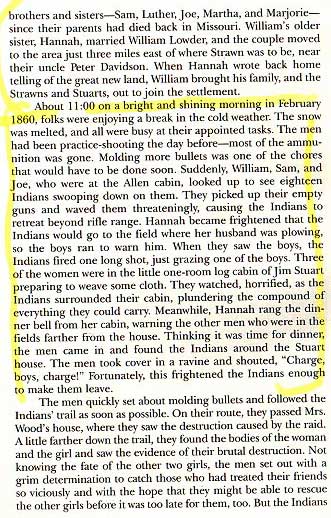 A third version of the incident appears in J.W. Wilbarger's book, Indian Depredations in Texas. 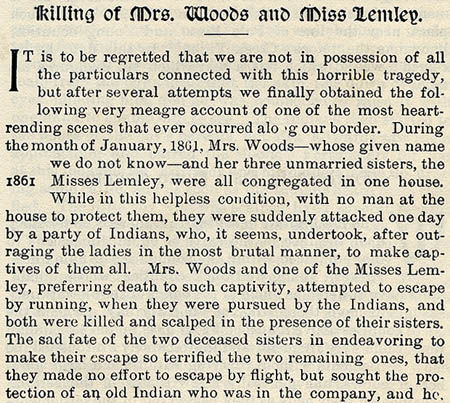 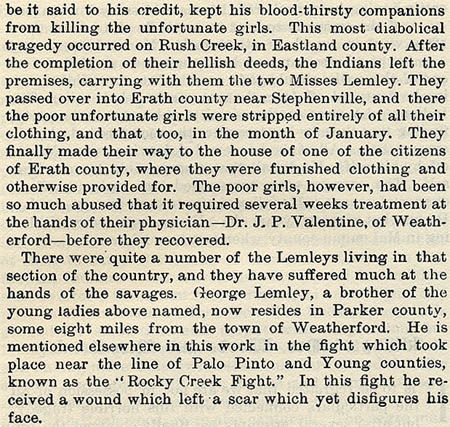